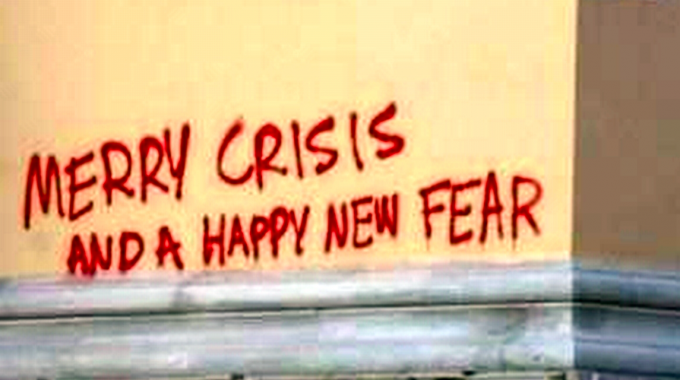 Published on the 14th of January 2013, This weekly word from Jeff Fountain was the second of two articles dealing with five crises that Europe was facing then. As they still are actual, we republish them this week.

‘Merry Crisis and a Happy New Fear’ was the ominous graffitti greeting sprayed on a wall in Athens and quoted by Jim Memory of Redcliffe College in Gloucester, at the European Missions Consultation I wrote about last week.
Jim was presenting British mission leaders with a sober picture of four major challenges which Europe faced, before adding a fifth which he said could dwarf all the others. The stark takeaway was: what do these realities mean for the way we do missions today?
The one crisis we addressed last week was the economic malais which began in 2008 but which had no foreseeable solution. For those fortunate to be living in northern Europe, this may seem like a temporary inconvenience that will eventually go away. But for our southern neighbours, the hopes that EU membership would be a ticket to prosperity have been shattered, and there is little positive outlook for the young generation.
Europeans hope for the return, not of the Lord Jesus, but of economic growth. But many economists now believe the world economy simply cannot go on growing like this. There just are not enough energy resources for the economy to continue growing at the rate is has done over the last two hundred years.
Political Crisis
Jim sketched crises in four other spheres in European life and society. While interwoven with economics, the political crisis also had non-economic dimensions. The EU and its predecessors (ECSC and EEC) had overseen the longest period of political and economic stability in modern European history. The pooling of industry and commerce had made war among its members unthinkable. But the imposition of strict austerity had led to riots in Greece and Spain. Euroscepticism, anti-EU sentiments, nationalism, populism, independence movements in Catalonia and Scotland (with other regions watching closely) were all undermining the solidarity for which the EU has stood.
Social Crisis
Hate speech, xenophobia and extremism, says George Soros, were symptoms of a more deep-seated social crisis gripping Europe. The Schengen Agreement in 1985 allowing Northern Europeans to shift to the Mediterranean, Eastern Europeans to migrate west and south, Poles to the UK, Romanians to Spain and Italy, had stirred cultural tensions among Europeans.
Yet over twice as many migrants had come from outside the EU, giving rise to clashes of values such as the wearing of the burqa in France. The secular European identity simply did not know how to handle religions which refused to bow at its secular altar, argued Jim.
Europe’s demographics presented another sobering aspect of this social crisis, with every single EU state below replacement level of 2.1 children per woman. More immigration would be needed to sustain production; the burden of more old people would have to be carried by fewer young.
Consumerism was yet another dimension of the social crisis. Jim asked about the purpose of life for today’s Europeans. He quoted Zygmunt Bauman in answer: “The fullness of consumer enjoyment means fullness of life. I shop, therefore I am.” This existential question was not only about the future of the EU but of the very meaning of life itself. He warned that if the inability to shop was the ”stigma of a life unfulfilled” then the prospect of a less prosperous future would have a devastating effect on the confidence and existential security of Europeans.
Religious Crisis
Europe’s religious crisis was familiar to us all. For decades sociologists, politicians and journalists had written the obituary for religion in Europe. Much of institutional Christianity has been shaken. But religion stubbornly has refused to leave the stage, suggested Jim. There was evidence that the patient was showing signs of recovery, and had received a decisive blood transfusion from the global south.
Environmental Crisis
Much more could be said about the spiritual and moral roots of all of the above, which Jim did not explore. Yet just around the corner, he saw a fifth crisis threatening to overshadow the others–an environmental crisis. You can read more about it in his outline.
He wondered if we should see this not as a crisis but as the early stages of a new phase in European history, a new normality. The post-war cycle of peace and prosperity in Europe may have come to an end. What lies ahead may be something very different to the present environmental, economic, political, social and religious realities. Christian mission would do well to be prepared for it.
Yet rather than a crisis to be endured, concluded Jim, we should see this change in Europe’s environmental, economic, political, social and religious future as an opportunity to bring the message of hope in Christ with new passion and confidence.

The future of the family

Hands up everybody who has aunts, uncles and cousins. According to author George Weigel, only…

What charter for humanity? Defining the destination of ‘development’ (5/5)

From a Biblical perspective, what are the ultimate goals for the development of any given…

The Brits may be having doubts about their membership of the European Union, but for…