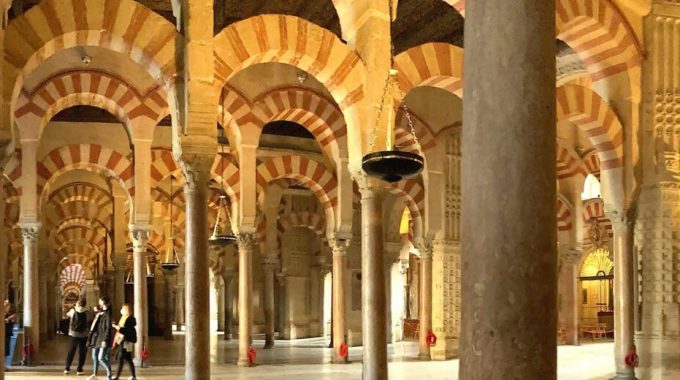 On a family visit last week, I was taken to the city which a thousand years ago was Europe’s (some say the world’s) largest and most cultured. Not Rome, nor London, nor Paris – but Cordoba, in southern Spain.

With an estimated population of 450,000 at the turn of the millennium, the city boasted impressive palaces and mosques and produced woven silks and elaborate brocades, leatherwork, and jewellery eagerly purchased across Europe and renowned as far as the East.

Around the time when Willibrord and Boniface were introducing Christianity to the Friesians and Saxons, newly-converted Muslim Berbers began crossing the Strait of Gibraltar from North Africa on raids which escalated into a full-fledged invasion and conquest of the Visigoth population in 711. (Two decades later Muslim forces crossed the Pyrenees into Gaul where they were defeated by the Franks in 732, in what some see as thwarting the Muslim conquest of Europe and others view as an overdramatised raiding party.)

The Visigoths had themselves been invaders and conquerors originating from near the Black Sea. Trekking westward along the shores of the Mediterranean, they sacked Rome en route in 410 and eventually settled among the Hispanics in the Iberian peninsula. Along the way they had picked up the Arian faith, a form of unitarianism holding Christ to have been a created being, declared a heresy at the Nicaean Council of 325.

Just decades after the Christian Emperor Justinian had completed the Basilica of Hagia Sophia (537) still standing in Constantinople (Istanbul) today, the Visigoths built the Basilica of San Vincent in Cordoba, the capital of the Roman province since 150BC. Before the end of the century, they had embraced Catholicism and thus the orthodox teaching that Christ is ‘consubstantial with the Father’.

After the Muslim conquest early in the eight century, the basilica area was shared by both faith communities. Later that century, Abd-al-Rahman I built a mezquita (mosque) enveloping the Visigoth basilica, encouraging the Christians to worship elsewhere. The foundations of the original basilica are still to be seen under the mosque floor. Today masonry from this period is on display, including a marble plaque with the Christian Chi-Rho symbol.

This magnificent structure was to become the pride of this world city. Over the next 150 years, the mezquita underwent three successive enlargements, making one continuous floor forested with 856 columns made of marble, granite, jasper and other stones garnered from many sources. The whole forms a square of 24,000 square meters; that is 2.4 hectares or 10 acres. Imagine two and half football fields, or the size of St Peters in Rome. Additional to this area is the former Muslim ablution garden-patio, converted in Christian times into a restful orange tree courtyard, the rows of the trees continuing the lines of the columns indoors.

The unique double-arch construction shows the influence of Roman aqueducts and archways, and of Byzantine architecture, as seen in the 6th century Basilica of San Vitale in Ravenna and Charlemagne’s Palantine Chapel in Aachen. The alternating pink brick and white stone pattern of the double arches creates a mesmerising effect of a graceful heavenly vault, enticing the worshipper further into what could be imagined as an oasis of palm trees. Transparency and lightness is created by the space between the top arches, being semi-circular Roman style, superimposed on oriental horseshoe-shapes.

The focal point of prayer in a mosque is the mihrab, usually at the point closest to Mecca. This mihrab however is at the south end, not south-east-south towards Mecca, probably due to the structure being built over a Christian church. A truly elaborately decorated horseshoe arch seems to radiate light and energy with its mosaics created by artists sent by the Byzantine Christian emperor as a gesture of goodwill.

The originality and diverse beauty of the sprawling structure has commanded the respect of later conquerors and guaranteed its survival. In our own times, the mosque-cathedral has been recognised by UNESCO as a World Heritage Site.

When Christian forces reclaimed the city in the thirteenth century, work began on converting sections of the mosque back into a cathedral with Gothic features. Eventually the dome, choir and nave of the Christian structure rose above the centuries-old roofline, giving an impression from above of a sunken cathedral. One senses incongruity stepping from the original double-arched sections into the traditional Catholic choir stalls and altar area where daily mass is still conducted. On his only visit to Cordoba shortly after his marriage in Seville, the Holy Roman Emperor, Charles V, did not hide his disappointment at the architectural intrusion: ‘You have destroyed something that was unique in the world’.

Judge for yourself. My photos attached here can only give a glimpse of the rich beauty preserved over thirteen centuries of a sanctuary which today testifies to the ebb and flow of faith expressions across our continent. (Double-click to enlarge).

There’s little in the news these days to give us much hope. Who looks forward…

Most Europeans have no clue, and couldn’t care less, that this Thursday, May 9, is…