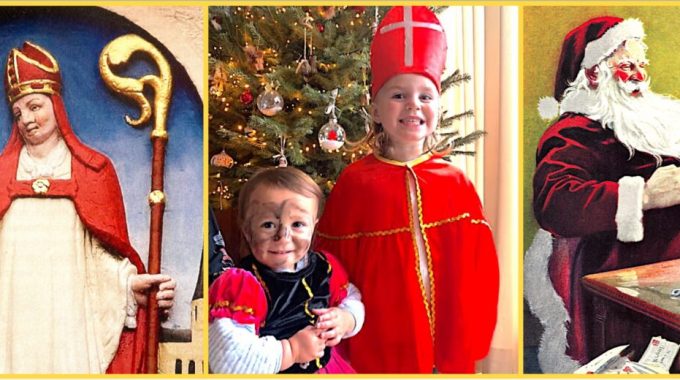 Strange, isn’t it, that the death of an old man in southern Turkey nearly 1700 years ago should stir so much anticipation and excitement among European children in 2021? This Monday, December 6, is the Feast of St Nicolas, the day the saint died in Myra, Turkey, in AD 343.

For Dutch children, the big day is the eve of St Nicolas’ Day on the 5th, a highlight of the year. ‘Sinterklaas’ is an evening of gift-giving and fun climaxing several weeks of anticipation since the Sint and his assistant Zwarte Piet (oops, we can’t call him ‘Black Pete’ anymore) ‘arrived’ in Holland from Spain on a boat last month.

He is the patron saint of many cities and even nations including Moscow and Russia, Amsterdam and Aberdeen, Limerick and Liverpool. He seems to have been everybody’s favourite saint: from merchants and sailors, newly-weds and judges, archers and thieves, children and students to old maids and penitent murderers.

And he is also the origin of Santa Claus a.k.a. Father Christmas, who will be omnipresent this month around the world helping to boost Christmas spending (after all, he is the patron saint of merchants). The metamorphosis from Sinterklaas to Santa Claus happened after the English took over New Amsterdam, the Dutch outpost on Manhattan Island at the mouth of the Hudson River. They changed the settlement’s name to New York, and the name of Sinterklaas to Santa Claus. The gift-giving continued but was shifted to December 25, Christmas.

St Nicolas actually once lived in ancient Myra, today’s Demre, in south-west Turkey–not Spain nor the North Pole. Paul, on his voyage to Rome, stepped ashore in Myra with his fellow prisoners and Julius the centurion. There they boarded the Alexandrian ship which later was wrecked in Malta (Acts 27: 5,6). On his third voyage, Paul briefly docked in Patara just west of Myra, heading towards Jerusalem (Acts 21:1).

Patara was where Nicolas, or Niko-laos (‘victory of the people’), was born probably late in the third century. Some say he was the son of very wealthy black Anatolians of the ancient Roman Empire. (Did you get that: black! Maybe we got the story all wrong. Maybe Sinterklaas was as black as his helper!) Tradition holds that his parents died in an epidemic while he was young. He seems to have been a believer from a young age and made a pilgrimage to Egypt and Palestine while still a youth.

Back in Myra, he was made bishop of that port city, and soon became widely known for his generosity to the needy, inspired by the teachings of Jesus. One legend says he dropped purses of gold coins down a chimney for the daughters of a poor man who could not afford a dowry. Along with other bishops, Nicolas was imprisoned under Diocletion’s persecution of Christians around 303AD. Released after Constantine became emperor, he is said to have attended the historic Nicene Council in 325 and signed the Nicene Creed.

Bari in southern Italy has claimed a special link with Nicolas since 1087, when sailors ‘translated’ the body from Byzantine Myra to Italy, against the protests of local Orthodox monks. They believed they were saving the Christian relics from the invading Muslim Seljuk Turks. After all, Nicolas himself had appeared to them in a vision saying he wanted to be laid to rest in Bari. Who could argue against that?

The body of Nicolas arrived in Bari amidst great fanfare on May 9 that year. To this day, his arrival is re-enacted with a flotilla of boats, fireworks and a street parade with a life-size St Nicholas. Celebrations climax in the great 12th century Romanesque basilica built to house his relics, where depictions of the saint clearly show Nicolas as black-skinned.

Spain?
So how did our Sinterklaas/Santa Claus/Father Christmas become so pale? And why do Dutch parents tell their children that the Sint comes from Spain? Well, it’s complicated. Probably it has to do with the Spanish empire of Charles V and Philip II absorbing southern Italy–and Bari–thus introducing the feast to the West. Spanish sailors may have introduced the story to the Dutch.

Meanwhile back in northern Europe, the feast was embellished with elements of the Germanic god Odin, who rode the skies on his white horse. Finishing touches of today’s Santa Claus came from across the Atlantic even before 1931 when Coca-Cola advertised a jolly fat figure dressed in the red-and-white company colours drinking their product. Already in 1923, White Rock Whiskey had a debut in Life Magazine with a familiar-looking Santa Claus reading Christmas mail.

All of which is a long way removed from the original godly bishop of Myra whose generosity to the poor and needy was in direct obedience to the teachings and example of his Lord Jesus.

P.S. This Wednesday I talk with Professor Govert Buijs who tells a fascinating story about how the exclusively Christian concept of agapè shaped our European society.

A Place of Trust

The literal highpoint of the Heritage Tour this year was arriving at Caux, one thousand…

There’s little in the news these days to give us much hope. Who looks forward…