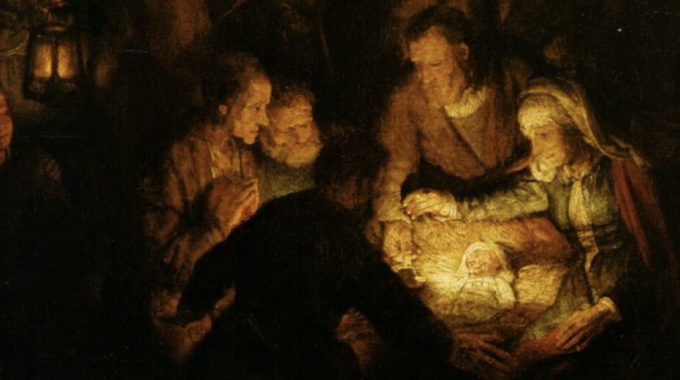 The story is irrepressible – despite all efforts to eradicate religion from the ‘winter holiday season’; undeterred by the shrill claims of the ‘New Atheists’ (remember them?) that religion was the root of all evil ; and regardless of the bastardisation of St Nicolas into the crassly commercial Santa Claus.

Once again this December, the unlikely story of a cow-shed birth in a far-away, ancient Roman province has resurfaced, as it does annually, stirring excitement and expectation among children and adults alike the world over.

Adults attend high-class choral presentations of the tale in the thousands. Children enact the Bethlehem narrative playing angels, shepherds, donkeys and kings. The story shows no sign of dying. Even here on the streets of Amsterdam, nativity scenes sprout in unlikely locations – outside pubs, in department stores and in the Red Light district.

For all the West’s rejection of the claim that the Incarnation was the central event of the history of the earth, the fascination with the baby Jesus for all ages is extremely resilient. Our art galleries are permanent monuments to the story, Rembrandt perhaps offering the fullest record in etchings, drawing and painting of the nativity scene, the flight to Egypt, the infant’s circumcision and other Holy Family scenarios.

Yet all these manger scenes, children’s plays and Christmas choral presentations remind us of the very core idea of Christmas – the celebration of God becoming one of us, in the flesh. To the modern mind it is still offensive and irrational.

The Apostle John addressed the problem of the gnostics of his day when he wrote: ‘This is how you can recognise the Spirit of God: Every spirit that acknowledges Jesus Christ has come in the flesh is from God…’ Denial of this was to embrace the spirit of antichrist, he continued (1 John 4:2,3). For gnosticism holds that only the spirit realm is good; all matter is evil. And throughout the centuries, gnosticism has attracted believers keen ‘to deny the flesh and the world’ and exalt the spiritual.

We may be so familiar with the Christmas story that we miss its shocking and revolutionary meaning. We may also be so influenced by modern forms of gnosticism – perhaps more widespread and influential in our Christian circles than we realise – that we miss the implication of Christ’s birth concerning the physical creation. By entering the physical world, God in Christ was affirming the goodness of the created world, of matter, declared to be ‘good’ by the Creator as he reflected on his handiwork. Even after the fall, creation still reflected God’s creativity and artistry, as the psalmist tells us. Humans, created in the image of God, imago Dei, still bore that image and were still responsible to ‘be fruitful, and multiply, and replenish the earth, and steward it.’

Body and spirit enjoyed an underlying unity from the start. Humans represented the only living go-betweens linking the spiritual and physical realms. We were created to live out the Creator’s will in the physical world. Our bodies, good in God’s eyes, were designed to reproduce in male-female complimentariness, becoming one flesh and pointing to a future of flourishing. Our bodies themselves are channels of grace to ourselves and to others. We read the Bible with our eyes. We speak and sing with our mouths. We hear God’s Word with our ears. We show love with our bodies through a compassionate look, a comforting arm around the shoulder, a hand offering a cup or a meal, a blanket or a medical dressing. God’s grace is extended through our bodies. Our bodies have a redemptive purpose: to reflect God’s image in and through physiques fearfully and wonderfully made.

Yet all around us a resurgent gnosticism tells us we cannot trust our bodies. Fragmentation of body and spirit devalues the body and promotes the ‘true’ inner spirit, one’s ‘inner self’; so that our bodies are believed to have no relevance to our gender.

When the early church had to decide on the nature of Christ, it clearly denounced gnosticism by embracing both the full divinity and full humanity of Jesus. What a paradox: the human baby Jesus came to make Father God visible!

Midwife to a nation