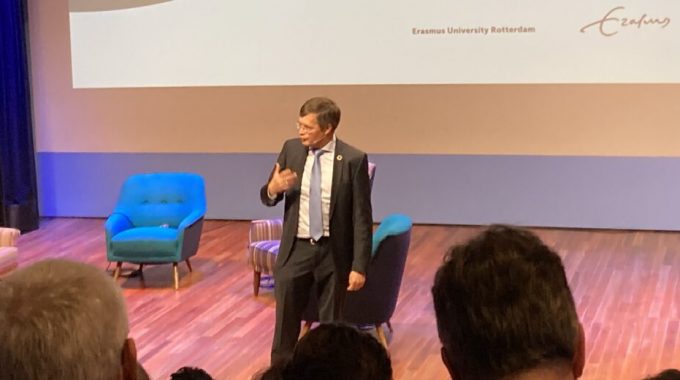 The COVID pandemic and climate change highlighted at COP26 are forcing global business leaders radically to rethink their key role in healing the world.

Bruno Roche told how that, while working as chief economist with Mars Incorporated, he wrestled with the moral question of what a right level of profit should be. In cooperation with Professor Colin Mayer of the Oxford University’s Saïd Business School, Roche and his team developed the concept of the Economy of Mutuality (EoM). This involved creating an economic system around a mutuality of benefits among all stakeholders, including clients and employees, thus empowering companies to meet the needs of the world. It meant profitably solving problems, not solving problems to make a profit. It implied accepting responsibility for the ecological impact of the company’s activities.

Back in 1970, Milton Friedman of the Chicago School of Economics declared the creed of modern capitalism to be that the one and only social responsibility of business was to use its resources and engage in activities designed to increase its profits for shareholders. But much had changed over the fifty years since, with scarcity of resources and shrinking biodiversity threatening our very existence. Friedman’s creed had become obsolete and dangerous. The urgent call from COP26 in Glasgow for radical change to avert climate disaster required responsible action from government, business and society, and not just ‘business as usual’.

Mutuality thinking aimed to shift company-centred profit-making to purpose-centred entrepreneurship. In other words, from the implicit purpose of profit maximisation to championing causes that solved the problems of people – and of the planet. I was struck how this paralleled the way ‘missional’ thinking attempted to shift from ‘church-centred mission’ to ‘mission-driven church’.

A second shift followed: from competition to cooperation. Instead of battling rivals, it meant cooperating with a broad range of partners, including government and society, seeking to mutualise capabilities, innovate and fix systemic breakdowns. Again I saw how this corresponded to a shift in church leaders’ thinking from competing with rival churches to cooperating as the united but diverse body of Christ – one church but many congregations in the same city.

Which led to a fourth shift, from measuring purpose only in terms of inputs or activities, to placing purpose at the heart of management programmes.

Utopian fantasy? Mars Incorporated didn’t think so. Last year they empowered the EoM to create a global platform to create a network of purpose-driven partners.

Several local stories were shared by executives of Dutch companies, both women and men, embracing the Economics of Mutuality. These included a leading paint company, a dairy company with global exports, an ethical bank and a company employing migrant labour converting old shirts into boxer shorts.

Last month Harvard Business Review featured former Unilever CEO Paul Polman and the Net Positive Manifesto, stating that ‘corporate leaders can no longer sit on the sidelines of major societal shifts or treat human and planetary issues as “someone else’s problem.” For their own good, they must play an active role in addressing our biggest shared challenges. The economy won’t thrive unless people and the planet are thriving.’

Polman joined the forum online with evangelistic zeal to convert his audience to the urgency of businesses world-wide to ’embrace the principles and practices that will deliver the scale of change and transformation the world so desperately needs’. The stakes could not be higher, he said. Government could not do this alone. Business had to step up.

He offered in his book Net Positive key lessons from Unilever and other pioneering companies around the world about profiting by fixing the world’s problems instead of creating them. To thrive today and tomorrow, he argued, companies had to become ‘net positive’ — giving more to the world than they took.

A net positive company improved the lives of everyone it touched, he outlined, from customers and suppliers to employees and communities, greatly increasing long-term shareholder returns in the process. This in turn provided opportunities for innovation, savings, and building a more humane, connected, and purpose-driven culture. A net positive company partnered with competitors, civil society, and governments to drive transformative change that no single group or enterprise could deliver alone.

The Economy of Mutuality just may be an idea that has come in the nick of time!

You are warmly invited…

Have you ever visited Romania?  If not, let me warmly invite you to Bucharest this…

The Law of Love (Part I)

What is the role of the Mosaic Law in contemporary society? This is the first…