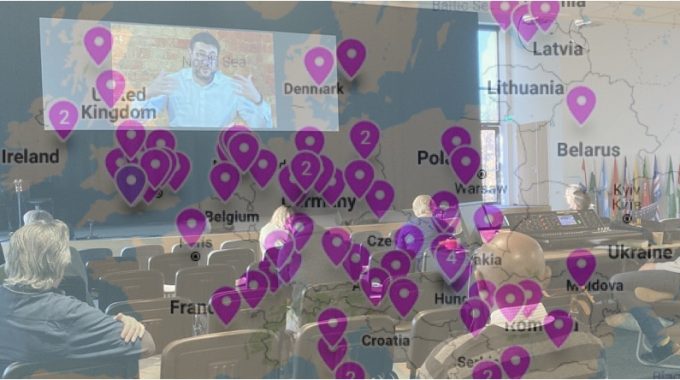 Sometimes we need to risk sticking our heads out over the parapet to look beyond our own church, organisation, neighbourhood or nation – to catch a much bigger picture of what God is doing across Europe and in our world.

Lausanne Europe 20/21 has been that kind of experience this week: engaging hundreds, and potentially thousands, of leaders from every corner of Europe in thinking, exhorting and praying together about making God known to Europeans. Whether following alone from one’s home or office, or in national gatherings such as the one I joined in Almere just outside of Amsterdam, we were all drawn into a broad, multi-ethnic, multi-lingual, multi-national ‘communion of saints’ blanketing Europe and far beyond. We became more conscious of our own cultural blind-spots, nationalistic limitations, linguistic differences and perhaps even racial prejudices. We were confronted with needs and challenges in today’s needy mission field of Europe.

The four days of online conversations, video reports, exchanges through chat boxes, interactive seminars and bible expositions have created a landmark event which will impact the evangelical landscape of Europe for decades to come. It has produced a rich, permanent, resource archive available to everyone, a common library of inspiration and information for churches and organisations, pastors and missionaries, lay and clergy, social workers and journalists, artists and students … for anyone concerned with the spread of the kingdom in Europe.

No one could attend all the simultaneous sessions (although the temptation was to ‘zap channels’) so the online archive will enable us still to get the most out of this watershed event. Here’s a listing of the recorded seminar presentations with discussions available on the Lausanne Europe platform: which ones could help your work?

Some of the many highlights included:

Got a hole in my soul, growing deeper and deeper/And I can’t take one more moment of this silence/The loneliness is haunting me/And the weight of the world’s getting harder to hold up/Who will fix me now? Dive in when I’m down?/Save me from myself, don’t let me drown/‘Cause you know that I can’t do this on my own.

In the closing sessions, Lausanne Movement veterans Sam Escobar and Os Guinness passed on historical perspectives to first-time Lausanne participants. Peruvian Escobar, whose 1974 talk helped restore to the global evangelical movement awareness of the socio-political dimensions of the gospel, urged his young audience to keep open to the questions that come from the world, especially from the new generation.

Guinness recalled his upbringing in China as a missionary child, and the Chinese interest in why the peninsular of the Eurasian landmass we now call Europe dominated the world scene over the past five centuries. They concluded the reason was Europe’s religion, specifically the rediscoveries of the Protestant Reformation of the big truths of calling, leading to capitalism, and conscience leading to human rights. While Europe owed much to the Greeks and Romans, Os continued, Europe was the heir of the gospel, principally the Reformation.

Yet now we were at a true civilisational moment with the West in decline, authoritarianism rising, climate change, and hearts failing for fear. Alternatives of the faith were proving bankrupt, disastrous and empty. “The gospel is truly the best news ever! Not only for individuals but for societies and the world at large,” Os concluded.

For the better and for worse

The fourth of the four European paradox addressed by Evert van de Poll. This is…

Expectant throngs were beginning to fill the streets of Edinburgh last week. The world's largest…

The tram arrived at our stop in East Berlin. All seventy of us poured out…