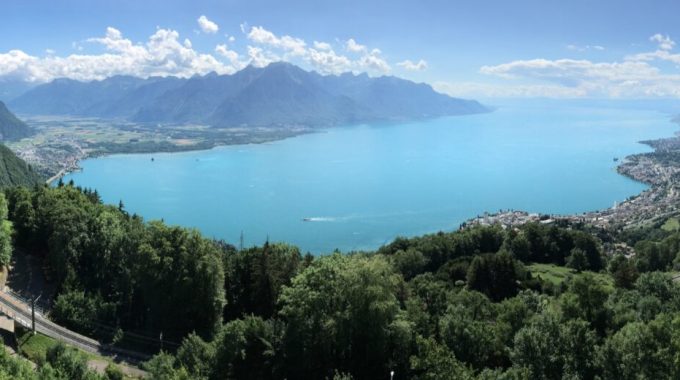 Tomorrow is Europe Day, May 9, a day to reflect on belonging to the diverse European family. It is a day both celebrated and ignored in different European nations.

To trace the story of this day, we go to a village called Caux, a thousand metres high in the Swiss mountains overlooking Lake Geneva and the French Alps, with one of the most spectacular views in the world. The Caux Palace Hotel, opened there in 1902, was the most advanced, most luxurious and biggest hotel ever built in Switzerland. Its Disneyland appearance of towers and turrets with coloured tiles attracted some of the world’s rich and powerful in the Belle Epoque era prior to World War One.

During World War Two, it became a shelter for escaped Allied airmen, Hungarian Jews and other refugees. In 1942, a young Swiss Foreign Office diplomat, Philippe Mottu, began to dream about finding a place where Europeans, ‘torn apart by hatred, suffering and resentment’, would be able to meet each other after the war. He had a growing conviction that Caux was to be the place for a Centre for the Reconciliation of the Nations.

Mottu, whom I heard tell his story on the 50th anniversary of the opening of the centre, had been involved in the Moral-ReArmament Movement (MRA) for over a decade. In 1938 he had organised a world assembly for the movement in Interlaken at which MRA founder, Frank Buchman, spoke about the need for nations everywhere to re-arm morally. An American Lutheran evangelist, he had had a life-changing encounter at Keswick, in the north of England, under the ministry of Jesse Penn-Lewis. This set him on what he a called ‘the revolutionary path’ of living according to four principles derived from the gospel: absolute selflessness, absolute honesty, absolute purity and absolute love.

When man listens, he said, God speaks. When man obeys, God acts. When men change, nations change. ‘If you want an answer for the world’s problems, start with yourself’, preached Buchman. He would rise early each morning at 5am to listen quietly to the inner voice of God for daily instructions. All through the day, Buchman was listening for guidance. He described it as striving to always have his sails filled with the wind of the Spirit. Thus began the daily Quiet Time habit, a hallmark of the MRA movement.

After the war, 95 Swiss MRA families met again in Interlaken and pledged enough money for the deposit on the building. Then began the renovation and repair project of what was renamed Mountain House, to be ready to receive some 3000 guests the summer of 1946, the first of many thousands more in the following years from Germany, France, the Netherlands, Italy, Belgium, Britain, Japan and many other countries.

Konrad Adenauer, who was to become the first chancellor of West Germany, was among the first delegation of Germans allowed out of the occupied zones: with politicians, trade unionists, industrialists, journalists, church leaders and educationalists.  There they met their counterparts from other nations with whom they recently had been at war. Forgiveness was asked for and received. Reconciliation and restoration were the fruit.

Last week’s weekly word addressed the brokenness, bitterness, hatred, hunger, poverty, fear and wounds experienced across Europe, and posed the question what could bring healing to a crushed continent. The MRA message was part of the answer.

For example, a French socialist resistance worker named Irene Laure, who hated the Germans and wanted to see the nation wiped from the map, was radically changed at Caux, and spent the rest of her life working for reconcilation in Europe. Her story is told in the moving video, For the love of tomorrow, which I recommend everyone to watch on Europe Day.

The French Foreign Minister, Robert Schuman, heard about Caux and the MRA emphasis on forgiveness and reconciliation, while on a train journey in France. A devout Catholic, Schuman had often told his fellow countrymen during the war that to rebuild Europe they would need to learn to love and forgive the Germans – sometimes to their great shock. He arranged to meet Buchman and asked him whom he could trust in post-nazi West Germany. Buchman responded with a list of names of regular visitors to Caux, including Konrad Adenaeur.

This introduction led to a friendship, sometimes strained by political circumstances, which nevertheless led to the rapid acceptance of the Schuman Plan for the European Coal and Steel Community, announced in a three-minute speech at 6pm on May 9, 1950. This defining moment put a plan on the table that has evolved into the European Union.

Tomorrow, May 9, at 6pm, exactly 71 years later, Andrew Stallybrass from Mountain House in Caux will tell us more about the amazing story of Caux in this month’s Schuman Talk. Join us!

An old friend of YWAM wrote to me in near desperation a while back. He…

Dan and Joe in Brussels