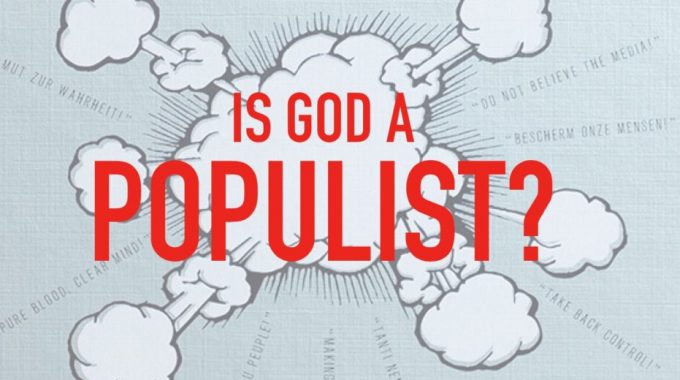 A year ago this week, a volume entitled Is God a populist? was launched to prompt conversations among Christian leaders and policy-makers about the political phenomenon of populism.

An initiative of the Norwegian Christian think tank Skaperkraft, the book contained contributions from experts across Europe to prod Christian leaders to consider how populists seemed to be filling a need with their talk of the Christian heritage of Europe. What had led to a situation where one third of the thirty-three European governments included populist parties, supported by 26.8 per cent of the European votes in 2018?

Last week in a webinair I was asked to moderate, we revisited the book with editor Susan Kerr (in Luxembourg) and contributor Christel Ngnambi (in Brussels). Theology professor Evert van de Poll joined us from southern France.

We began by reminding ourselves that the slippery concept of populism was a ‘doubled-edged sword’, as Susan wrote in her introduction. On the one hand populists could encourage democratic participation, as in the US civil rights movement, or on the other destroy democracy, as in Venezuela. Populism could be right-wing or left-wing. Common traits however involved creating an ‘us’ and ‘them’ polarity, the ‘people’ versus the ‘elite’; and blaming scapegoats either within the culture, such as the government, or ‘Brussels’, or the ‘experts’, or those who threatened from outside, like refugees, migrants, newcomers and foreign workers.

Yet when the pandemic broke out, and the need for experts was widely recognised across Europe, voices began to declare that by shifting the support of European voters away from anti-elite extremes and back towards mainstream parties, the pandemic would sound the death knell for populism.

However, as Evert noted, it was too early to read the funeral rites for populism. While the pandemic had appeared to have caused a fall in support for populist parties and a return to more familiar centrists in several lands, in others it had allowed populist leaders to introduce emergency measures without any timetable of normalisation.

Evert’s evaluation was that much anger directed towards ‘elites’ government had gone underground. A suppressed resentment towards the handling of the pandemic could well explode again and express itself in a rise of new anti-elite parties. ‘They’ have not handled this well and don’t care for ‘us’, was the unspoken sentiment, he feared.

Susan agreed there had been a lot of wishful thinking about the fall of populism. But the reality was that the root causes of populism still had not been addressed. Globalisation, changes in the European social fabric, the collapse of traditional manufacturing industries and therefore jobs, the consequences of austerity measures, the continuing migration issue, increased surveillance, poor economic growth, rising inequality and a sense of a lack of representation, all on top of the social and economic pressures caused by lockdown, remain potential causes for social frustration and fresh populist outbursts.

Christel enumerated measures contrary to ‘European values’, of closed borders and shaken solidarity between EU member states, the return of the ‘state’, fear of outsiders as competitors of jobs and carriers of the virus, and the use of war language (as in France) in combating the virus. All these factors could foster a rise in populism unless addressed.

So how should Christians, and evangelicals in particular, respond to populism?

While studies among Lutherans and other protestants and evangelicals were conspicuously absent, he personally detected a gap between church leaders, who were resistant to anti-elite parties, and ‘pew-sitters’ who were more likely to vote for such parties but did not openly express their views.

Yet churches needed to be safe places for discussions, a place where peoples’ concerns were heard, he urged. People needed to know that if they expressed populist ideas, they would not be stigmatised. Church needed to be a place where discussion happened. Many Christians were disappointed with what the mainstream political parties offered on moral and ethical issues. Yet there was a serious lack of debate, warned Evert.

Susan agreed that Christians were not immune to populist appeal. The binary language and imagery being used by populist seemed to resonate with the Bible: light and dark, good and evil, material and spiritual.

The church needed to be a hub for the community, a place to inspire hope. Susan referred to the ‘measuring stick’ of Christian principles she wrote about in the book’s conclusion, as ‘seeking the common good, protecting human dignity, and being responsible for one’s neighbour’, rather than defending some against others, and pitting some as more important than others.

Globalisation- where is it taking us?

Prabhu Guptara: Globalisation - where is it taking us?

The twentieth century saw the rise of ideologies such as capitalism or socialism. Both were…

The time seemed ripe last week to confront some Evangelical sacred cows. At an annual…

OVER THE NEXT MONTHS, the sixtieth anniversaries of the liberation of Paris (August 25th) and…