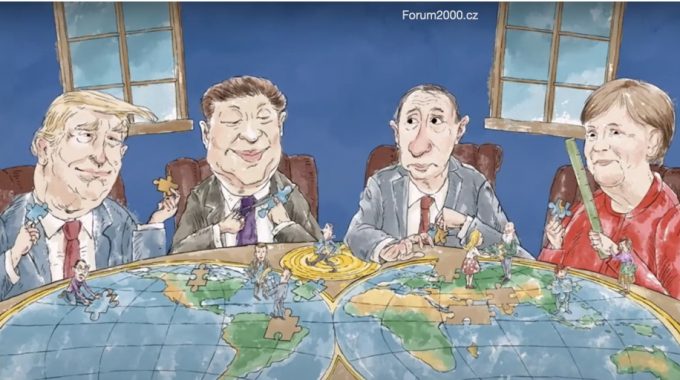 The Dutch version of a book written by Pulitzer Prizewinner Anne Applebaum arrived this week, sent to me by my friend who had translated it for the publishers.

As the English title suggests, The Twilight of Democracy is a sober warning of the rise of authoritarian systems and the eclipse of liberal democracy.

Applebaum, a journalist with impressive credentials with The Economist, Washington Post, Foreign Affairs, The Spectator and The Atlantic among others, had first-hand contacts with politicians, journalists and intellectuals in her American motherland, her husband’s homeland of Poland and in Hungary and Britain. She describes her dismay at how many former colleagues and friends in each of these lands traded their democratic ideals for conspiracy theories, political polarisation, nostalgia and social media extremes.

Applebaum, whose books on the former Soviet world include Iron Curtain and Red Famine: Stalin’s war on Ukraine, traces the ‘conversions’ of several personal acquaintances – politicians, journalists and intellectuals  – to populist and authoritarian stances. For years she has been warning against a new ‘Nationalist International’ of xenophobic parties such as Law and Justice in Poland, the Northern League in Italy, and the Freedom Party in Austria, seeking to ‘overthrow the institutions of the present to bring back things that existed in the past—or that they believe existed in the past—by force.’

Her dismay resonated with my own this week as I was forwarded Facebook exchanges between two of my own colleagues and friends. One, an American living in Asia, has been suffering badly from the Corona virus along with his wife, and had apparently objected to the American president’s comments on the virus as something not to be feared. The other, an Asian living in America, responded by accusing the virus victim of having a Hate-Trump demon.

Both of these friends are very intelligent, highly educated believers. Both have international mission profiles and reputations. Hence the confusion caused by the accusation of demonisation, provoking upset responses from more of my friends expressing their loss of respect for the accuser.

I felt a responsibility to write and ask my Asian friend if he realised the damage his accusation would have on his own reputation and credibility. Was it worth weighing in with strong opinions which would make little difference in the big scheme yet leave long-lasting damage to his reputation? I copied two mutual colleagues into my correspondence to ask for their moderation if they felt I was out of balance, or if they also shared my concern.

The accuser’s response was unambiguous and unrepentant: Satan was seeking to make America his kingdom and the incumbent president was the only person standing in his way. Is “Hate Trump” a matter of mind or of spirit? my friend asked.

One of our mutual acquaintances wisely cautioned as follows: “We are all free to express our opinions. Not only that, if we want to be responsible citizens, it is our duty to express our opinions. However, it is not our duty to oppose those believers who have a different assessment of the rights and wrongs of any national system. Rather the opposite: If your assessment is that Putin is doing his job as President horribly badly, and mine is that he is doing his job wonderfully well, then both of us have a responsibility to express that view but to go out of our way to avoid attacking each other.”

How do we respond to the widespread polarisation among friends and colleagues, whether believers or not?

Firstly, let’s remember that what we have in common is still greater than what separates us. That includes non-believers, humans bearing God’s image.

Secondly, recognise our own blind spots. Someone sent me last week these timely pointers on how we can do this:

Thirdly, keep seeking and telling the truth. Wise advice could be heard last week from Prague at Forum2000, an annual conference I usually try to attend, initiated by Vaclav Havel in 1996 to promote democracy, civil society, human rights and religious, cultural and ethnic tolerance. This year’s online event addressed, among other topics: Facing the growing intolerance in democratic societies. One panelist spoke of the role of civil society leaders – religious leaders, educationalist, media people – to be reconcilers, not polarisers. Oxford professor Timothy Garton Ash urged a fresh commitment to truth, solidarity and responsibility, quoting Havel’s words (who in turn was quoting the 15th century reformer Jan Hus): Seek the truth; find the truth; tell the truth.

P.S. All the video recordings of this year’s and previous forums can be viewed on www.forum2000.cz.

Last week I visited Holland for the first time in my life–Holland in Michigan, USA,…

# 9 TRANSPLANT! … the church into the 21st century

HOPE.21, a pan-European congress with 1000 evangelical leaders from 38 European countries, has just finished…