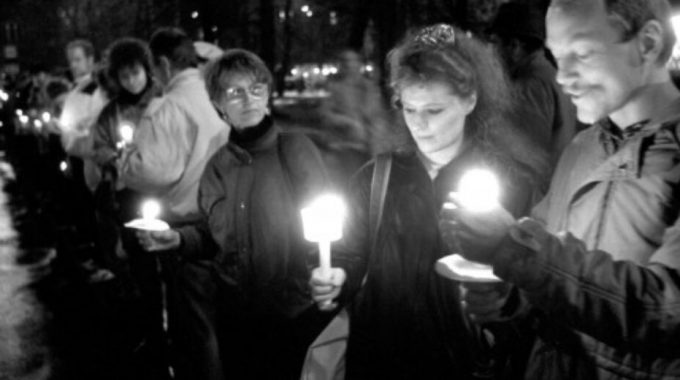 Protest movements last week in the name of free and fair elections in the former Soviet satellites of Belarus and Kyrgzystan echo events in Central and Eastern Europe three decades ago.

Similar scenes were witnessed the streets of the eastern German city of Leipzig thirty-one years ago, leading up to a turning point on Friday, October 9, 1989. The miracle of Leipzig, as the remarkable event on this evening came to be called, was to lead directly to the fall of the Berlin Wall exactly one month later. It demonstrated the triumph of the ‘soft powers’ of truth, love and justice, exercised through prayer and non-violent protest, over repression and tyranny.

It is a story we have told before in this blog. It’s a story worth repeating.

To mark the anniversary, East German Suse Chmell revisited this story in this month’s Schuman Talk last Friday night. The daughter of a Lutheran pastor, Suse was a 15-year-old at the time, and often slipped away from home to join prayer meetings and protest marches in a neighbouring town.

The starting point of this movement of peaceful rebellion against the oppressive communist rule was the historic Nikolaikirche in Leipzig, where Luther had preached and Johan Sebastian Bach was choir master and organist. Many of his compositions were heard for the first time in this church.

In 1982, Christian Führer, the pastor of the Nikolaikirche, started prayer meetings for peace, Friedensgebete, on Monday evenings with a handful of the faithful. Originally focused on the right to emigrate, by late summer 1988 the meetings embraced a more radical idea: to stay and agitate for a free and democratic Germany.  Knowing that Stasi agents attended the meetings, Pastor Führer relished the chance to speak to a captive audience, for example, on the Sermon on the Mount.

Despite police brutality,  the Friedensgebete continued to grow. By the spring, access for cars to the church were blocked. Even the closest motorway exits were closed off or subjected to large-scale checks.

By the autumn of 1989, the movement was approaching its climax. The Nikolaikirche continued to be open for all: believers and unbelievers, true worshippers and secret agents. The authorities tried to pressure the church leaders to cancel the peace prayers. Police surrounded the church and began making brutal arrests. Each Monday more arrests were being made, yet more visitors flocked to the church, overflowing its two thousand seats.

On Monday, 2nd October, 20,000 marched from the Nikolaikirche to the Thomaskirche on the far side of the city, where they were met by riot police with shields, helmets and truncheons. Wednesday, October 7, was the 40th anniversary of the GDR, an occasion for widespread protest. Police waded into protesters, arresting many and hauling them off to horse stables.

Two days later, October 9, a thousand Stasi collaborators were sent to the Nikolaikirche to ‘prevent provocations’. By early afternoon, 600 of them had taken up positions inside the church. By mid-afternoon the church was full and late-comers filled up seven other churches in the city centre by 5pm.

After the prayers, the 2000 congregants filed out of the building with their candles, to be greeted by 70,000 peace protestors in the streets. Waiting soldiers, paramilitaries and police began to move into the crowd seeking provocation, but no-one allowed themselves to react in violence.

Pfarrer Führer described what happened: ‘If you carry a candle, you need two hands. You have to prevent the candle from going out. You cannot hold a stone or a club in your hand. And the miracle came to pass. Jesus’ spirit of nonviolence seized the masses and became a material, peaceful power. Troops, industrial militia groups, and the police were drawn in, became engaged in conversations, then withdrew. It was an evening in the spirit of our Lord Jesus for there were no victors or vanquished, no one triumphed over the other, and no one lost face.’

Later the head of the Stasi admitted: ‘We were prepared for everything, except prayers and candles.’

Suse confessed that she was embarrassed to tell people she came from Eastern Germany until she realised that she had witnessed a miracle of God. By telling this story of the transformation of her nation, she could encourage others still agitating for freedom and justice in places like North Korea, Belarus and other former Soviet satellites.

Free e-book: The miracle of Leipzig was just one of a number of events that took place across the former communist world leading to the collapse of marxists governments from Estonia to Romania, East Germany to Russia. I have collated a dozen of these stories which have previously appeared in weekly word, into an e-book which I will send to you free on request. Write to me at jeff@schumancentre.eu.

Best wishes, folks, for the new year. Seems like we’ll need them. Because frankly the…

Setting course for the New Year

Published on the 3rd of January 2011 under the title 'Setting course for...2011', this weekly word from Jeff Fountain dealt with why should Christians be involved in politics. The New Year is the time for making resolutions and setting goals.…

It happened again last week in Berlin. When I asked a German congregation to think…