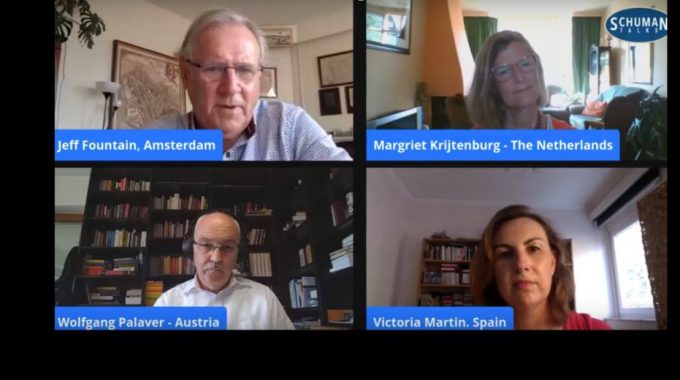 As ‘virtual pilgrims’ this past week, our summer school students and online participants – from Finland on the Arctic Circle to the Hawaii in the Pacific – traced the story of transformation in Ireland and Britain during the first millennium through the planting of communities fleshing out the life of Jesus.

Communities, rather than churches, were the building blocks of the Christianity Patrick transplanted in Ireland from his native Britain, having first experienced monastic life in Gaul before returning to his former captors in Ireland. Stone towers, beehive cells and chapels scattered across Ireland are the physical remains of these communities, sometimes 3000 strong, where young and old, men and women, lived, prayed, worshipped, laboured, studied and evangelised together.

Colourful and elaborate manuscripts preserved in libraries and cathedrals today offer us glimpses of the creativity, mental alertness, perseverance and craftsmanship fostered in these communities. The Celtic way was highly relational, drawing from John’s emphasis on love in his gospel and letters – sometimes contrasting with the more hierarchical, command-structure approach of the Roman Church. Although later subsumed under Rome, particularly after the decisive Synod of Whitby in 664, the Celtic movement continued to shape and inspire ongoing waves of missionaries like Chad to the Angles (the early English), and of apostles to the Friesians like Willibrord and to the Germanic tribes like Boniface.

Many Celtic communities later became Benedictine monasteries, and formed a vast network across the continent nurturing the emerging European civilisation. What could this teach us about connectedness, interdependence and mutual trust in today’s Europe?

Last night, after the summer school was over, our monthly Schuman Talk focussed on the importance of ‘community’ for Europe’s future, especially a post-Covid, post-Brexit Europe. Three academic experts well-read in the founding of what was once called the European Community joined me in our virtual studio to explore the topicality of Schuman’s understanding of ‘community’.

Margriet Krijtenburg (The Netherlands), Wolfgang Palaver (Austria) and Victoria Martín de la Torre (Spain) each spoke about the biblical foundations of Robert Schuman’s concept of community, at the heart of the proposal he laid on the table exactly 70 years and three months ago last night. (We hold these Schuman Talks monthly on the 9th day at 6pm to draw attention to the Schuman Declaration made on May 9, 1950, at 6pm in Paris).

Victoria explained the original sociological distinction made between ‘community’ as a natural, relational grouping into which each person was born, and ‘society’, the wider grouping where people related to strangers on contractual and functional bases. ‘Community’ was linked to stability and to the past; ‘society’ to progress and the future, involving conscious decisions of the participants. However, this definition could lead to exclusivism, loss of human dignity and freedom under authoritarian regimes. In France, for example, during the Nazi occupation, when under Marshall Pétain the definition of ‘Frenchness’ fostered xenophobia, excluding Jews and other non-Catholics.

Schuman, himself a devout Catholic, saw the danger of this exclusivism, which Victoria pointed out was being reincarnated in today’s populism. Schuman and his colleagues consciously chose the word ‘community’ to describe the institutions which would form the European project; the decision-making process would be called the ‘community method’.

The integration process based on this ‘community method’ was launched on May 9, 1950. While drawing on basic Christian values of human dignity, the search for the common good and the choice for solidarity, it required an inclusiveness that would embrace non-Catholic believers and ‘Enlightenment’ secularists. The Founding Fathers were mainly men from the borders of France, Germany and Italy and who lived with layers of multiple identities. Starting with family, ‘community’ spread through concentric circles eventually to embrace the whole human family.

A personalist understanding of community was open to diversity and transcendence, or the spiritual, explained Wolfgang, and was based on voluntary participation instead of force and pressure. Victoria added that the ‘community method’ meant that each nation would be treated on equal terms, where the stronger did not dominate the weaker, protecting not obliterating nationhood. States should seek the common good, not to dominate. Forgiveness and reconciliation were to be foundational values.

Together we discussed Schuman’s statement that ‘before being a military alliance or an economic entity, Europe must be a cultural community’, and asked if we did not have the cart before the horse. Why had the name European Community been replaced by European Union in 1993? Victoria understood that the British had preferred a more functional concept represented by ‘Union’ than the relational understanding of ‘community’.

She asked if it was not time to restore the name and sense of ‘community’ to the project. Wolfgang and Margriet added that that would require the broader public, including faith community leaders, youth and children, to be part of the conversation about tomorrow’s Europe; a conversation far too important to leave just to the politicians.

In his book 'Without Roots' Pope Benedict XVI stresses that Europe needs creative minorities. He…

Here we go again into new year. And, as always, we wonder what it will…

The Next Twenty Years

A month from now, the world’s press will be reminding us of those exciting and…