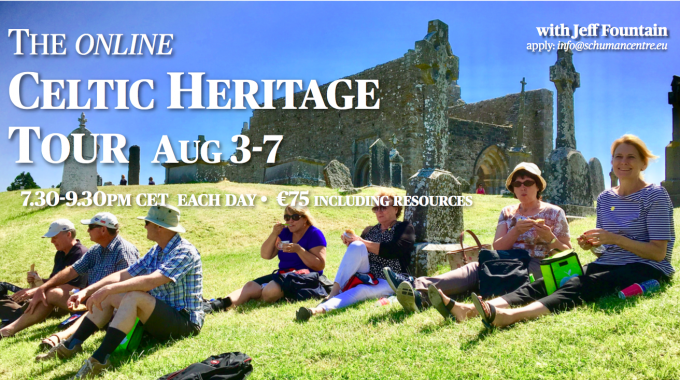 Britain and Western Europe owe a great deal to a movement that germinated in Ireland on the fringe of the world for its conversion to Christianity. This is the story we will explore for five days through our first online Celtic Heritage Tour, August 3-7, 7.30-9.30 CET each evening: ten one-hour sessions.

While the first official Roman Catholic mission to Britain was as late as 596, led by Augustine of Canterbury, Patrick had crossed the Irish Sea to evangelise his former captors already in 432.
His own family had been part of a British church planted before Rome became the dominant within Christianity.

Some have suggested that at least some churches in Britain could have been the result of a Galatian connection to the Celtic people group in central Asia Minor to whom Paul wrote. Gelatwas a word for Celtic, from which we come words like Gaul, Gaelic, Galicia (places in both Spain and Romania).  Despite the apostle’s admonitions to them for being ‘foolish dimwits and slow-learners’, their evangelistic efforts may have worked their way up through a Celtic network all the way to Britain.

Similarities
The Celtic church had significant differences with Roman expressions of Christianity but striking similarities with Coptic, Ethiopian, Syriac and Armenian artwork and manuscripts. One difference was that, unlike Rome, which championed Peter and Paul as their apostles with links to the Eternal City, the Celts emphasised John’s stress on love.

John’s disciple Polycarp in turn had discipled Irenaeus, who became bishop of Lyons in Celtic territory. This suggests another avenue whereby the church could have spread up through Gaul and across to Britain.

What is clear is that when Patrick–a captive slave who escaped to Gaul but who eventually returned to Ireland–began his mission, the communities he planted were distinctly different from those in the Roman empire. There were no cities in Ireland and Patrick and his disciples planted rural monastic communities modelled on those of the Desert Fathers in Egypt.

We will ‘visit’ some of these early communities on our journey, settlements of sometimes up to 3000 people, and which lasted for a thousand years. While marauding Vikings ravished many of the monastic settlements in Ireland, Scotland and England, they themselves eventually were christianised. Some of their descendants even joined such communities. A second wave of Viking offspring, the Anglo-Normans, brought another bout of mayhem and destruction in the 11th and 12th centuries.

Finally, Henry VIII’s Protestant forces ransacked and abolished the remaining monasteries, now under Roman authority as Benedictine, Cistercian or other orders. At the picturesque Glendalough, for example, his soldiers cast all the treasures of manuscripts, liturgical vessels and art into the lake, bringing to a tragic end a millennium of Celtic creativity.

It was left to Oliver Cromwell’s troops to rampage through Ireland in the 17th century smashing many of the remaining high crosses and demolishing many ancient buildings.

Building blocks
The Celtic legacy however had spread across the continent from Ireland to today’s France through to Switzerland, Germany, Austria and Italy. Their monastic settlements became building blocks for an emerging civilisation shaped by Christian values, many growing into cities including Luxeuil, Würzburg, St Gallen, Bregenz and Bobbio. The Irish became known as the intellectuals of Europe, ‘disciplers of nations, teachers of kings’.

Ian Bradley, one of many authors seeking to revive Celtic spirituality to help equip church for today’s challenges, writes:

‘Celtic Christianity does seem to speak with almost uncanny relevance to many of the concerns of the present age. It was environment-friendly, embracing positive attitudes to nature and constantly celebrating the goodness of God’s creation. It was non-hierarchical and non-sexist, eschewing the rule of Diocesan Bishops and a rigid parish structure in favour of a loose federation of monastic communities which included married as well as celibate clergy and were often presided over by women.’ (The Celtic Way, p. viii)

Join us to learn more about this inspiring movement and its influence as we cross over to Iona, Glasgow and Edinburgh in Scotland, and ‘drive’ down the English coast to Lindisfarne, Durham, York, Lichfield and Cambridge, and eventually to London and Canterbury.

To register, write to info@schumancentre.eu. Instead of the €1500 plus fee for travel, accommodation, food and museum entry, you only pay €75.

You can also join Evert Van de Poll’s 10-hour lecture series on Christian faith and the making of Europe each morning on the same days, also for €75. Or attend the Summer School of European Studies live in Amsterdam with both morning and evening series, plus afternoon activities of museum visits, canal boat tour and more for €200 (accommodation €100).

See you in Amsterdam? or online?

Where is Network Europe?