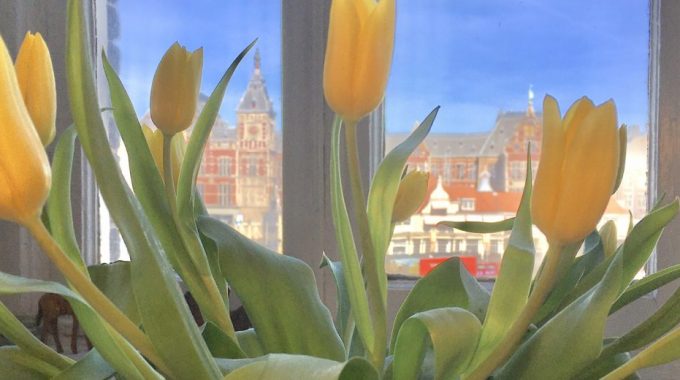 Governments around the world are hoping special apps will help trace Covid-19 contacts and thus contain the spread of the virus.

Meanwhile, the following four ‘apps’ I often talk about, to suggest how God has been at work in the European story, can perhaps have special meaning for us this Easter.

Firstly, the ‘God’s will’ app:
No, this doesn’t imply that God sent the virus as judgement. I wouldn’t know. This ‘app’ is the recognition that God’s will is always for his will to be done. In other words, it is never his will for his will not to be done. That’s logical. Christians are not fatalists. Not everything that happens in this broken world is God’s will. Much happens that is not God’s will for the human race, and for individuals, but can be the consequence of sin and disobedience. The Ten Commandments, for example, are a list of instructions promoting human flourishing. When flouted, suffering results.

This ‘app’ affirms that ultimately God is sovereign. Yet he seeks our cooperation. So Jesus told us to play our part and pray for God’s will to be done here on earth, in Europe, in our country, as it is in heaven. That’s what he wants, not for things to get worse and worse.

Joseph told his brothers, ‘you meant evil against me, but God meant it for good in order to preserve many people alive’. So too God turns evil intentions into good for his purposes, in ways confounding human expectation. Which is what Easter is all about: how a cruel instrument of torture was turned into a symbol of hope and healing; how one man’s death brought the possibility of life for all.

Secondly, the ‘wheat and tares’ apps:
Jesus’ story about wheat and tares growing up side by side in the same field offers a picture of the good and the bad interlaced throughout history and in daily life. News media tend to focus on the bad – that sells papers and airspace. We need to learn to look for where God is at work quietly and behind the scenes. What might God bring out of all of this?

This crisis is an enormous human tragedy, as were the Black Death, the Spanish flu and other pandemics before them. Yet some say the Black Death catalysed the Renaissance and the Reformation (renewed religiosity), technological advance (compensation for lost labourers, perhaps even the invention of printing to replace dead monastic copyists), and medical breakthroughs. The practice of quarantine started during the Black Death, when Venetian officials imposed a 30-day (trentino) isolation period – later extended to 40 days (quarantino) – for ships arriving from plague-affected areas.

Today a global sabbath has been imposed. The 24-7 society has been derailed. Amsterdam’s Red Light district is closed. Air pollution is diminished, noise pollution muffled, road deaths and criminality have plummeted – as if the world is being re-booted to get rid of the virus! Everywhere people are confronted with real issues of life and death, and the meaning of existence. A mid-page spread in Friday’s leftist paper, Volkskrant, asked: Can the Easter story inspire us in this crisis?

Thirdly, the ‘faithful minorities’ app:
God has always worked through creative minorities: from Abraham to Moses to David to the prophets to Jesus, the early church and faithful messengers through the centuries. Christianity spread in the Roman empire as people saw the sacrificial care offered to plague victims by believers living as a minority in a pagan world. In later centuries, European clergy ministering during plagues to the sick died in disproportionate numbers.

Today ‘faithful minorities’ carry the burden disproportionately again – health care workers in IC departments and old peoples’ homes, believers and non-believers, refusing to seek their own safety; as well as politicians, economists and health experts working day and night to make wise decisions for our well-being, while most of us stay home in relative ease, safety and isolation. These heroes deserve our prayers, support and honour.

Fourthly, the ‘death and resurrection’ app:
Easter reminds us that the Christian faith is all about death… and resurrection: supremely in Christ whose death and resurrection have profoundly shaped our western culture in ways rarely acknowledged (as Tom Holland explains here). We see a pattern of death followed by resurrection, apostasy and renewal, decline and resurgence, in the story of the Christian faith over the ages. We have arrived at a low point in European history in terms of faith, an unprecedented era in which most seem to find belief in God impossible. Yet the flatness and emptiness of the closed, secular worldview is becoming obvious to more and more. Maybe this is what philosopher Charles Taylor predicted in A Secular Age: ‘We are just at the beginning of a new age of religious searching, whose outcome no-one can foresee’.

Why should we remember Robert Schuman?

A transcript of Jeff Fountain's speech during the State of Europe Forum 2019 in Bucharest.…

Taking a stand against injustice

Irregularities are regularly committed in the political institutions of our European nations, as well as…