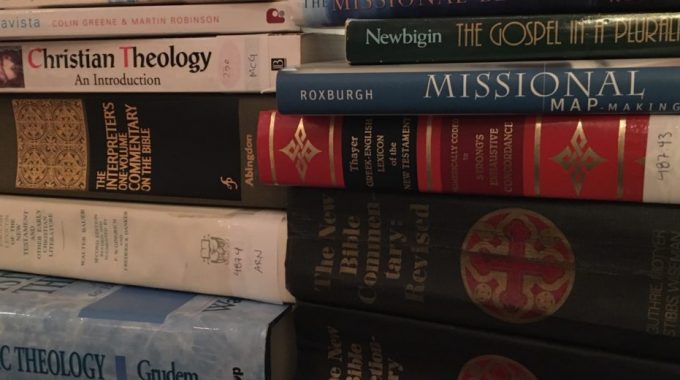 When my youngest son introduced his wife-to-be to my 90-plus-year-old mother via skype, the first question was: ‘and what are you studying, dear?’ ‘Theology’, came the answer. ‘Oh, how boring!’ exclaimed my mother spontaneously. Mum was one for practice and experience rather than theory.

For many of us, theology was the stuff of dry sermons, church arguments and splits, and long rows of leather-bound tomes in the pastor’s study, all far removed from the daily life of Monday to Saturday.

Some of my mother’s reaction lingered in my own attitude over the years. I had dabbled at the edges of theological study, picking up basic themes and terms here and there, and had followed (and taught) courses on biblical studies. But I too had preferred practice and experience, wanting to understand how to make a difference in the world around us.

However, preparing for this week’s intensive in the MA programme on Missional leadership and European studies in which the Schuman Centre partners with ForMission College, I’ve been awakened to the revolution going on in theological circles in recent decades. Our topic is contextual theology, which involves understanding the Christian message and practice in a specific local context.

For some five centuries, the Reformation was assumed by protestants to be the norm for theology and church structures. These assumptions were exported with missions, along with western denominational streams and their theological justifications and became part of the transplanted models of Christianity. Theology as an academic subject took its lead from the Enlightenment viewing itself as pure knowledge, expressed in propositions. Denominations and organisations felt the need to draw up credal statements, leading to many disputes and splits.

Since the 1960’s, when decolonisation freed non-western thinkers to think outside the box, alternative cultural and theological perspectives were developed. The theologies of the western church were seen as products of their own context and time, with certain assumptions and blind-spots. Latin Americans like Orlando Costas, Rene Padilla and Samuel Escobar were among the first to challenge western readings of Scripture and to expose protestant blind-spots, especially on issues of justice, racism, politics, economics and church organisation.

The growing globalisation of both the church as well as international culture created new conversational partners, breaking the hegemony of western thinking. Lesslie Newbigin and David Bosch were two leading voices with western training and majority world experience who challenged western cultural and temporal assumptions. Bosch recognised a paradigm shift in theological thinking was happening through majority world theologians insisting that mission, theology and context formed a triangular relationship. Some called this shift ‘the liberation of theology’.

The theology of liberation emerged from the experience of unjust oppression in Latin America in response to the question: what has the Bible story got to say to our concrete situation of injustice? Just as God contextualised himself in Jesus Christ, in a particular time and place, so all mission was intrinsically contextual.

Contextual theology upturns the top-down, elitist understanding that theology is for professionals only. It focuses on the grass-roots level and includes the whole Christian community in the task of unfolding theology. It starts from below with the local, the particular and the concrete, rather than a higher level ‘propositional truths’.

Which leads to the relationship between the local church and its locality. Systematic theology itself will not generally raise questions about the gap between church and culture. Contextual theology will ask: what does the reign of God look like in this context? And what is the role of the church bringing about this transformation?

A local church culture has developed where the church is the place people come to from near and far to participate in church activities, with little engagement with the neighbourhood. It is often a church-centred culture, captivated by a consumer-client mentality of the prevailing marketplace mentality.

Contextual theology accepts the mission of the church to be good news in the neighbourhood, particularly for those on the margins of society. That involves listening to the community, a difficult exercise for those of us activists used to talking and giving answers. It embraces the understanding that God is already active in our neighbourhoods. We need to learn to discern his hidden presence and activity, and cooperate with what he is already doing. It involves expecting to see Jesus in ordinary, everyday life, not just in ‘sacred’ activities in ‘sacred’ places.

Contextual theology is a pathway towards encounter with Jesus and others. Challenging, but not boring.