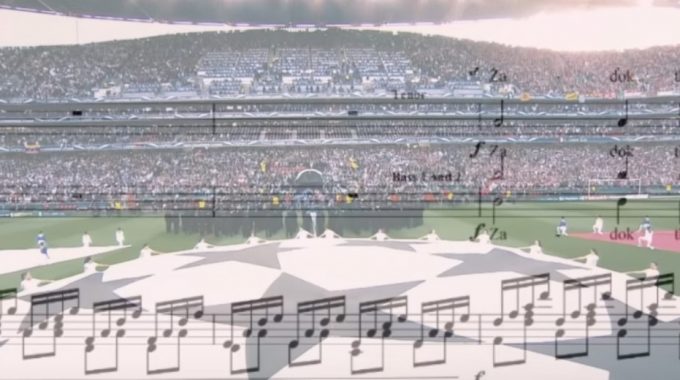 The UEFA Champions League playoffs between the last sixteen teams don’t resume yet for another three weeks. And yet the high choral strains of the anthem familiar to any football fan resounded through the Upper Room salon in Amsterdam as we sketched a ‘bird’s eye view of the Old Testament’ in our Bible for Dummies session last week, aimed to show how much the Bible has shaped our culture.

So what does the famous anthem have to do with the Old Testament?

English composer Tony Britten was commissioned by UEFA to produce a theme song with the weighty sense of occasion of a clash of champions. “The idea of the Champions League was to make the game beautiful again and the music had to reflect this quality,” Britten explains on a UEFA video about the anthem.

The majestic instrumentation and intense choral outbursts build anticipation of the mighty struggles about to be witnessed in the great football cathedrals of Europe. Britten’s direct inspiration was the regal music called Zadok the Priest, performed for the coronations of the British monarchs ever since 1727 when George II of Hanover was crowned King of Great Britain and Ireland. The music for George’s coronation was composed by the king’s German compatriot, George Frederic Handel, composer of the Messiah.

(Someday I should write a weekly word about how the Germans conquered Britain, starting with the invasions of the Angles and Saxons, through to the story of a middle-ranking German prince name George Ludwig, elector of Hanover, (George II’s father), who couldn’t speak a word of English in 1714 when he became George I, king of the United Kingdom, and whose descendant still sits on the British throne; and of the princes of Wales who for generations, as heirs to the throne, were given German brides, so that German was the mother tongue of all the royal children; and of Queen Victoria who annoyed her cabinet by speaking German to her Prince Consort; and even of George V, whose mother, wife and cousin (the Kaiser) were all Germans; and how the royal family name of Saxe-Coburg-Gotha was diplomatically changed to Windsor, Princess Elizabeth (Windsor) adopting the name Mountbatten-Windsor after marrying Philip, prince of Greece and Denmark, whose mother was a Battenberg (later anglicised to Mountbatten), and whose father was a Schleswig-Holstein-Sonderburg-Glücksburg – which is all very embarrassing when you are at war with Germans … or trying to exit from Europe. But I digress.)

Back to Handel and Zadok the Priest. Although Handel’s musical score for George’s coronation was original, the text, set to other music, had been used in every English (and later British) coronation since Edgar was crowned king at Bath Abbey in 973.

And here we finally return to the Old Testament connection. For the text is based on the opening chapter of I Kings, verses 39 & 40:

Zadok the priest and Nathan the prophet anointed Solomon king.
And all the people rejoiced and said,
God save the king! Long live the king! May the king live forever!
Amen! Amen! Hallelujah! Hallelujah!
(Pause and watch it here.)

As we read the biblical account, we get the impression that it was a desperate, last-minute affair, nothing like what we would expect British coronations to be, choreographed and timed to the second. Nathan the prophet discovers the plan of Absalom’s brother Adonijah to claim the throne intended for Solomon. Nathan rushes to urge Bathsheba, mother of Solomon, to tell David what is afoot. The elderly, ailing David instructs Nathan and Bathsheba to mount Solomon on his mule, ride to an appointed place where Zadok the priest and Nathan should anoint him with oil as king. Read the full story in I Kings chapter 1.

Despite Samuel’s earlier warning to Israel not to follow other nations in choosing a monarch, Solomon’s reign becomes the climax of the Old Testament and the peak of Israel’s fortunes. From there on things go downhill into exile.

The British tradition of a whole millennium has built on this biblical scenario giving it an aura of divine approval, with a stage setting of cathedrals and ceremony, richly-robed archbishops, bishops and choirs, jewel-studded crowns topped by crosses, and huge crowds watching long processions of mounted guards and horse-driven carriages. It speaks of authority, grandeur, riches, power and glory.

Which is what Tony Britten wanted to capture. Musically he comes close. But when you read the lyrics in the three official UEFA languages of French, German and English, well… what do you think?

No, it doesn’t even come close to its biblical source of inspiration.

In further sessions of Bible for Dummies we’ll be exploring other examples of the all-pervasive influence of this remarkable book on our culture and society.

Politics, as everybody ‘knows’, is a dirty business. No place for Christians, so the argument…

From pope to fellow pilgrim