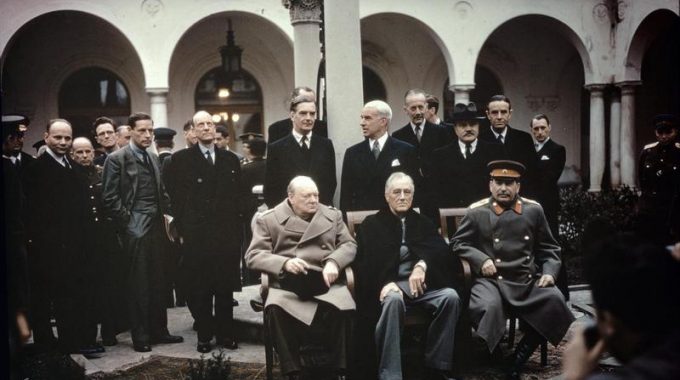 Europeans tend to see their continent as being made of two distinct parts: the East and the West. Dr. Evert van de Poll explores how this longstanding division evolved throughout the centuries.

By around the 13th century, what we today call Eastern Europe was almost fully included in Christendom – the ‘Europe’ of the day.

But there was one important distinction: the peoples or ethnic groups… who received Christianity from Constantinople, adopted the Greek version of it, together with the Greek script (later developed into Cyrillic) and they accepted cultural and political influence from Byzantium (…)

The nations who chose the eastern rite (i.e. Orthodox Christianity) did not in any way make a foolish decision. Quite the contrary: …until about the 11th century, the Byzantine Empire surpassed the Western European kingdoms and empires in almost every respect, culturally, economically and militarily. In fact, one of the reasons why the emperor Diocletian had moved the centre of gravity of the Roman Empire to the East, in 284 AD, was that this part was much more civilised and prosperous. People of Byzantium looked down on the recently converted Barbarians in the West.

As Leon Marc explains, the economy of Europe only really took off after the year 1000 and it is about that time that Western and Eastern Europe slowly began to diverge economically.

Added to the growing prosperity in the West there was another divergence. The West witnessed the emergence of a movement of thought called the Enlightenment. Enlightenment ideas of democracy, civil rights, freedom, separation of Church and State, rational science, progress, and religion being a matter of the private sphere, have had a far-reaching impact on the societies in the West. However, the central and eastern parts of Europe were impacted much slower. As a result, the political developments have not been the same. Viewed from the West, democracy and human rights are the hallmarks, the foundations of a modern society. In the east, these things were not so evident for a long time, and often considered, precisely, as ‘Western’.

When people in the West conveniently talk about Eastern Europe as the whole eastern half of the continent, they perpetuate an old prejudice.  ‘Europe’ literally means ‘west’, and in the eyes of many the real European culture lies in the west, i.e. the western part of the continent. The idea of ‘Eastern Europe’ comes from Western Europeans who have determined the geographical and political foundations of the continent. They saw themselves as the real Europeans. This age-old prejudice still lingers on. After 1945 the countries west of the Iron Curtain had no difficulty in simply attaching the label ‘European’ to their common market, their treaties and institutions of cooperation. After the destruction of the Berlin Wall the countries to the east were invited to ‘join Europe.’ But the people in this part of the world themselves have always considered themselves as an integral part of Europe. Moreover, they are very much aware of the historical religious divides and the cultural differences that have flown forth from them.

In fact, what Westerners conveniently call ‘Eastern Europe’ really consists of several strands – Central Europe, Eastern Europe proper and Southeast Europe, which is also referred to as the Balkans. There are several west-east divides. The first one goes back to the old division between the Western and the Eastern Roman Empire. After the Empire was Christianised, the division continued. The West became Catholic, orientated to Rome and culturally Latin, while the East became Orthodox, oriented to Constantinople and culturally Greek.

During the Middle-Ages, the peoples to the north and the east were evangelised by Catholics and Orthodox respectively. The Germanic and some Slavic peoples were incorporated in the Catholic realm, other Slavic peoples in the Orthodox realm. So the division line was prolonged in northern direction, separating the Poles and the Lithuanians from the Russians, the Hungarians from the Romanians, the Croats from the Serbs. Today, it runs right through Ukraine, between Greek Catholics in the western provinces and Orthodox in the rest of the country.

The second east-west divide is between the people with a Germanic ethnic background and language on the one side, and people with a Slavic ethnic background and language on the other side. This divide was reinforced by the Communist turn, since 1917 in the Russian Empire and since the end of the Second World War in Central Europe and the Balkans. When the defeat of Nazi-Germany was imminent, the victors divided Europe in a Western and a Soviet influence. In the following years, the so-called Iron Curtain was drawn between the western half of the continent, and the Communist countries that were now collectively called Eastern Europe. It ran right through Germany. West-Germany became part of the West. Austria also, despite its name (Österreich, ‘the eastern realm’) and despite its neutral status – it did not integrate the Western military alliance NATO but became a ‘partner for peace’. Urs Altermatt sums up the significance of this, with respect to the religious and cultural history of Europe.

Since the Middle Ages, a territorial-political internal border runs through Europe that almost exactly corresponds to the eastern border of the former Carolingian Empire. More or less the same frontier was repeated in the 20th century, when the three allies Roosevelt, Stalin and Churchill during the conference of Yalta in 1945 divided Europe in two parts. In an almost ghostlike way they reinstalled the age-old inner European border line. A second internal frontier runs more eastward, it is religiously determined, separating Catholic and Protestant from Orthodox Christianity.’

The West looked westwards to the United States as its new powerful ally. It began a process of economic and political integration resulting in the European Community. Meanwhile, the West and the Communist East were engaged in a Cold War.

The second ‘frontier’ as Altermatt calls it, was subdued. And as far as the Communist ideology was concerned, it should disappear altogether. All Slavic peoples were now united in one Soviet Bloc, together with the other peoples of the East. They should forget about their Catholic or Orthodox past.

However, Communism did not last long. Within a few remarkable years after the destruction of the Berlin Wall in 1989, the Communist regimes left the scene, one after the other. Barriers were broken down, doors were open for people in the East to travel to the West. Countries that had shaken off the Communist regimes adopted Western style democracy and free market. Now they could join the European Union. But only some of them did, others did not want to (Russia, Belarus), while Ukraine, a newly created country, was deeply divided over this question. And so, through an ominous turn of events, the eastern border of the EU ran more or less parallel with the old Catholic-Orthodox divide. It had never really disappeared despite the common experience during the Communist era. Since the 1990’s it took on more and more significance as tensions emerged between the EU on the one hand and Russia and its influence zone on the other.