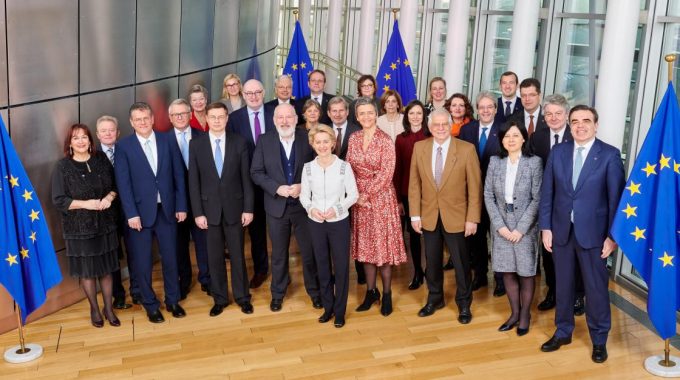 From the Canopy of Prayer (edition 77)

Unless the Lord builds the house, its builders labour in vain.” Psalm 127:1

It’s about the house “Europe”. It is still a construction site and many are busy. A new phase of construction is just starting : a new parliament, a new commission, each with a new president. OK then – let them go to work, from the secretary to the president! Because it says: “… build on it” it means they should do something and work.

But what is the question? With or without the LORD! What kind of construction site would that be, where the tradespeople are busy but forget the client and put his plan aside? Chaos would be the result!

Both David Sassoli and Ursula von der Leyen are presidents who are open to God. May they continue building the house “Europe” with the Lord according to his plans.

The mandate for the 2019-2024 European Union does not only see the election of new MEPs to the Parliament but also a change to the whole European Commission. As Jean Claude Juncker steps down as President of Commission, we see Ursula von der Leyen start the process of forming a new Commission. In July she became the first woman to take on the role of President elect.

Over the summer she asked all the nations of the EU to submit 2 names, one woman and one man, as possible candidates for the position of commissioner to represent their country. Once that was done, then began the process of selection and designation of the role each commissioner would be responsible for. As there is only one commissioner for each country Ms von der Leyen needed to choose who she thought might best suit each role and it was her hope to have as near equal representation as possible between women and men on her Commission. Once this was done, then it was the turn of the European Parliament to conduct hearings into the suitability of the individuals that had been selected for the dossiers that they had been proposed for. These hearings were concluded on 14th November and by the time you read this, the final vote will have taken place on 27th November during the Strasbourg plenary session of the European Parliament.

Once the Parliament has given its approval of the whole of the new Commission, it can then start its work on preparing to fully take over from Mr Juncker’s Commission on 1st December 2019. Ursula von der Leyen has already set out her agenda for the next 5 years which can be found here using this link. Ursula von der Leyen is a European by heart and by conviction, and she has announced that she will focus on an ambitious climate agenda to make Europe the first climate-neutral continent by 2050. She also committed to working closely with the European Parliament to strengthen democracy and a fair social market economy in Europe. Ursula von der Leyen also gave a very personal insight into her idea of Europe’s path amid global challenges saying: “We need to do it the European way”.

It is important that as those who pray that we become more aware of our role to uphold our leaders both nationally and as a continent before His throne of grace and the Commission is an important part of those who lead us. As the Commission they play a large part in deciding the direction that Europe is going, both by their agenda and their decisions.

1. Malta: pray that all criminal actions connected to the assassination of journalist Daphne Caruana Galizia and all her investigations into corruption will be brought to light. Also for people of integrity to come into positions of authority.

2. U.K. Pray for the ongoing election campaign, that it will be conducted in a transparent way in these final two weeks leading up to election day on 12th December. Pray also that the electors will find the truth and reality in the promises being made by the main parties and that they would cast their votes accordingly.

The Canopy of Prayer