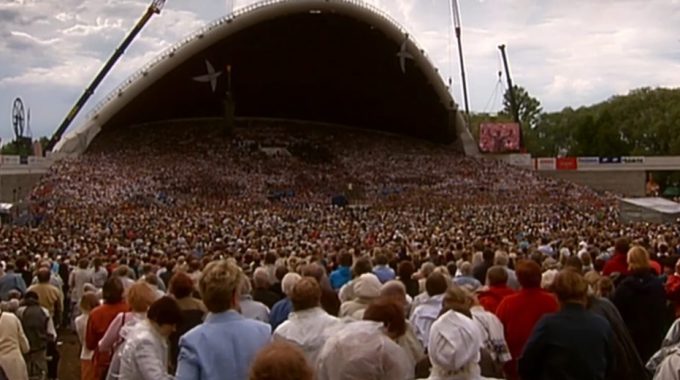 The tenth in a series on the spiritual revolution behind the fall of communism thirty years ago.

‘A singing revolution’, starting in the Baltic states of Estonia, Latvia and Lithuania as early as 1987, eventually led to the implosion of the Soviet Union in 1991.

Reminiscent of Jehoshapath’s choir leading the army of Judah into battle (2 Chronicles 20), the Balts deployed the ‘soft’ weapon of song against the militarised might of the Soviet Union to liberate themselves from their occupation. Estonian artist and activist, Heinz Valk, first referred to the events from 1987 to 1991 culminating in independence as The Singing Revolution.

The Baltic states were the first countries successfully to declare their independence from the Soviet Union, eventually to be followed by twelve other former Soviet Republics.

Events started in February 1987, when secret plans to mine phosphorite in north-east Estonia were leaked to the television, angering Estonians who were afraid of both environmental damage from the mining and the further erosion of their culture by the presence of imported Russian miners. Since World War Two, Stalin had resettled over 400,000 Russians in Estonia–more than a quarter of the total population–under a deliberate policy of Russification. This provoked many Estonians to take to the streets in protest, something which would have automatically led to imprisonment prior to Secretary General Gorbachev’s new policy of glasnost (openness).

Song festivals now became major expressions of protest and patriotic fervour. The first Song Festival in Tartu, Estonia, was held in 1869 to commemorate the fiftieth anniversary of the abolition of serfdom. It was the first manifestation of Estonian identity, according to conductor Kaie Tanner: “By singing, we kept ourselves alive as a nation. Without singing, there would be no Estonia. The song celebration was one of those few places where we, Estonians, could feel like one – not part of the Soviet Union, but part of our own nation.”

The Lutheran church was a major source of Estonian choir traditions, one of the few ways peasants could express themselves. Estonians became Lutherans even during Martin Luther’s lifetime when German nobility had ruled the land. Peasant children were brought up with choir singing long before song celebrations developed.

Also across the border at one of the largest amateur choral and dancing events in the world, the Latvian Song and Dance Festival, aspirations for the rebirth of a free Latvia were expressed in song. Latvians also began protesting plans for a hydroelectric dam across the Daugava River which they feared would cause environmental damage; they also opposed plans for a metro in Riga that threatened the city’s cultural and historical heritage. On 14 June 1987, the anniversary of the 1941 deportations (when Soviet authorities had sent tens of thousands of Latvian activists and their families to gulags and forced settlements in Siberia), many laid flowers on the Freedom Monument in Riga, an act often cited as the start of the Latvian National Awakening.

Further south in Lithuania, the largely Catholic population added Catholic hymns to their singing repertoire as they joined the swell of protest in song. At one song festival, a pre-Soviet Lithuanian tri-colour flag suddenly appeared on stage. As Soviet officials moved to confiscate the flag, they found themselved blocked by other choir members standing in stubborn solidarity.

Gorbachev also found himself blocked from suppressing choral protests and patriotic expression by his own policy of glasnost. With the world watching, how could he use the forceful methods of his predecessors to stop… singing?!

The Singing Revolution gained more momentum in May 1988 at the Tartu pop festival, featuring modernised choral anthems criticising Soviet oppression. Late summer saw the enormous stage and sound shell of the Tallinn Song Festival Grounds (see photo) resounding with patriotic songs before an audience of at least 100,000 singing along with the choirs.

This was the back story to the 600-kilometre human chain created by Estonians, Latvians and Lithuanians linking arms right across their nations, producing the Baltic Way of August 1989 we wrote about earlier. The Balts were sending a clear challenge to the Kremlin that Soviet occupation was totally illegal, having started with the Molotov-Ribbentrop Pact between Nazi Germany and the Soviet Union exactly 50 years before on August 23, 1939. A quarter of the total Baltic population participated, many singing the songs they had learned at the festivals.

Seven months later, Lithuania declared independence from the Soviet Union, the first Soviet republic to do so. Estonia followed in August 1991 and Latvia soon after. Soviet forces tried to regain control, killing numbers of civilians and servicemen. Militia and volunteers built concrete barricades and formed human shields around key installations like parliament buildings, bridges and communication towers. Eventually Soviet forces backed down. Within a few months the Soviet Union itself became extinct.

We often hear Christian arguments being mingled with nationalistic rhetorics in current political debates. In…

From under the rubble

The Law of Love (Part III)

A tribute to Karol Wojtyla