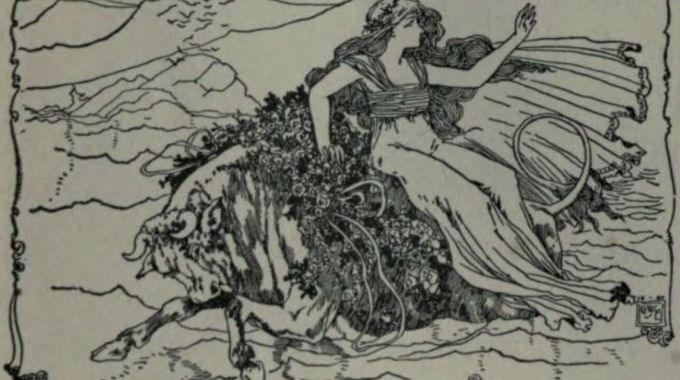 A draft of the future reedition of Evert van de Poll’s book ‘Europe and the Gospel’.

Herodotus said, ‘Perhaps we could agree that (the name of Europe) stems from the name of a Tyrian woman called Europé’.

He is referring to a Greek myth in which we meet a certain Europé. According to the myth, Zeus, the supreme deity, disguised himself as a bull in a meeting with the Oceanides, a group of beautiful young women who were playing on the shores of the Phoenician city of Tyre (in present-day Lebanon). However, he was interested in only one them; the young and attractive Europé, daughter of Agenor, king of Tyre. Captivated by her beauty, Zeus seduced her and took her for a ride on his back, but then kidnapped her, swimming to the distant isle of Crete. There he took her as a concubine, and she gave birth to Minos. The pair had two other sons. In order to honour her, Zeus named the regions north of Crete after her.

But, as Herodotus rightly remarks, this story had nothing to do with the region to which his contemporaries had attributed the name Europe. The only geographical clue that the Europé myth suggests is that the isle of Crete lies at the crossroads between the three major parts that made up the world for the scholars of Antiquity: Europé in the north, Asia in the east, and Africa in the south.

There might be another clue to this curious story. Mythology is never just a product of fantasy, nor just the distraction of storytelling. There is always a message behind these stories. Couched in mythological language, they are telling us something about the real world. What intention or what lesson might the ancient Greeks have had in mind as they transmitted this story from generation to generation?

At a face value, this myth might underscore the Oriental origin of the name Europe. Don’t forget, they seem to admonish the Greeks that the land we live in owes its name to people of the East. It was their idea to call us ‘Europe,’ the ‘land where the sun sets,’ the ‘West.’ In his study of the origins of Europe, George de Reynold argues that this was indeed the point. ‘Obviously, it was only in the eyes of Asians, Phoenicians, Assyrians, and Egyptians, that the Hellenic peninsula and all that lay behind were the land where the sun sets, the land of the night, the land of the north. This geographical evidence underlines the view that the word Europe has a Semitic, Phoenician origin. And history has confirmed this view.’

Why perpetuate the story of this Oriental princess whose name we bear? Several sources attest to the fact that ‘Europe’ had a cultural connotation for the ancient Greeks. They sometimes used it in opposition to Asia and the Persians who lived there: ‘Asiatic’ meant vulgarity, lavishness, despotism and anything Persian, as opposed to ‘Europe’ which was identified with Greece and hence with freedom and civilisation.

Is this myth perhaps a critique of such prejudice, such feelings of superiority? Is it a reminder that the origins of their civilisation lay partly in the West and partly in the Orient? Did it convey the message to the Greeks that they needed to draw from Oriental sources to develop their philosophy? That the West cannot live without the East? That we need to remain open to what the Orient has to tell us? A number of authors commenting on the myth think that such is indeed its hidden message. The French philosopher Boucounta Seye, for example, writes: ‘the image of a cultural mixture emerges from this story; Greek identity has become stronger for having opened itself to the Orient.’

Centuries later, Christian authors like Lactantius retold the same version of the myth to point out that the spiritual origins of Europe lie in Asia; in Jerusalem to be precise. The real ruler of the West comes from the East, they stated, referring, of course, to Jesus Christ. This is a tempting interpretation, even though it goes beyond what the ancient Greeks could possibly have had in mind. In our day, the myth is used to tell yet another story. As of 2019, an image of this mythical princess appears on euro bank notes to illustrate the common origin of the nations of Europe.

TEN YEARS AGO, TWO YOUNG YWAM WOMEN, RENEE AND SUE, WERE RESCUED BY HELICOPTER as…

He probably won't be in the mood for it, but Saddam will have plenty of…