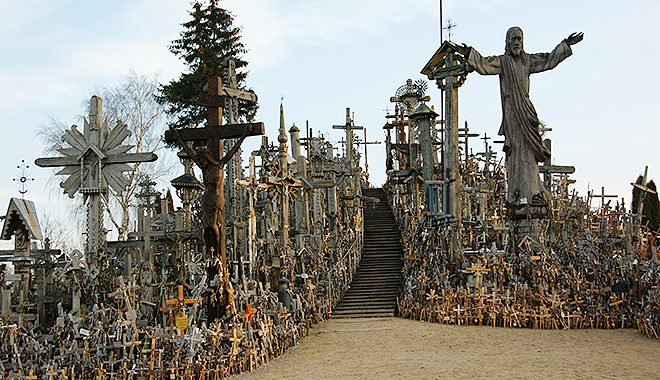 The eighth in a series on the spiritual revolution behind the fall of communism thirty years ago:

Exactly when the first crosses appeared on the Kryžių Kalnas–or the Hill of Crosses–in northern Lithuania, no-one really knows.

Not far from the Latvian border, hundreds of thousands of crosses of all shapes and sizes cover this small hill which for centuries has been a sacred shrine. It has survived the repeated efforts of authorities to stamp out ‘ignorance’ and ‘fanaticism’.

Like a giant pin-cushion, it is a monument of folk art with many hand-carved crosses; some miniature, others five metres-high; some intricate and elaborate, others crude and simple; most anonymous, and one large wooden sculpture of Christ crucified, a gift from the Pope.

While first written records of the shrine are dated 1850, some say the first crosses were erected by those mourning the victims of revolts against heavy-handed Tsarist suppression of national uprisings first in 1831 and later in 1863. Crosses were set up in memory of the executed rebels, whose burial places remained unknown.

During the Soviet occupation, Lithuanians further suffered under mass repressions. Hundreds of thousands were deported by Stalin to Siberia from 1944 to 1952, leaving whole villages totally deserted.

In 1956 Lithuanians began returning home. They erected new crosses on the hill in gratitude for their return, in memory of their torture and suffering, and as memorials for those who would never return. The hill became a place of prayer for those still suffering. Passionate and openly anti-Soviet inscriptions often adorned the crosses, making the hill an open-air museum, a record of human suffering and inhumane oppression.

In 1961, the authorities came with bulldozers to raze the hill and erase it from human memory. Wooden crosses were burned. Iron crosses became scrap metal. Stone crosses were buried. The hill was declared a forbidden place, and kept under surveillance.

But under the cover of darkness, new crosses kept appearing. At first they were small, but then became bigger and bigger. The authorities tried more drastic measures. Again in 1973 and 1975, the hill was levelled, and the area was covered with waste and sewage.

Projects to flood the area, block the roads, and turn the hill into an inaccessible island, all failed over time. More crosses just kept appearing. Despite destruction by the authorities, locals and pilgrims from all over Lithuania risked political danger by defiantly rebuilding their sacred site at night.

Finally in 1985, the government abandoned their hopeless task. Peace came to the Hill of Crosses. Four years later the revolution was well under way to overthrow the Soviet oppression. And in 1991, independence came at last to Lithuania.

On September 7, 1993, Pope John Paul II visited the Hill of Crosses, declaring it a place for hope, peace, love and sacrifice. He laid a stone inscribed with his word: Thank you, Lithuanians, for this Hill of Crosses which testifies to the nations of Europe and to the whole world the faith of the people of this land.

Today this 10-metre high hill is an unimaginable forest of hundreds of thousands of crosses, truly a powerful declaration of hope in the face of tyranny.

In search of belonging