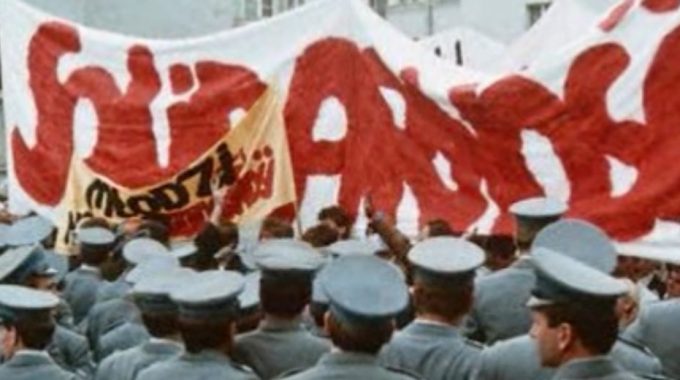 The seventh in a series on the spiritual revolution behind the fall of communism thirty years ago:

Two years after Pope John Paul II had celebrated mass with hundreds of thousands of his fellow Poles on Victory Square in Warsaw, I found myself in Poland’s capital to address a student conference.

It was May Day weekend, 1981, when compulsory participation in the annual parade had been suspended. Little attention was given to the parade. Instead crowds flocked to the events organised by the Solidarity trade union, a movement which had mushroomed the year before to a membership of ten million.

The pope’s first pilgrimage of June 1979 had been a watershed. Nine days of public events hammering on themes of truth, dignity and human rights had released new hope for a different future. Poles had come to realise “how many and strong ‘we’ the people were and how few and weak ‘they’ the regime were”. ‘We’ were those who would live for truth, for dignity, for solidarity. ‘They’ were those who treated humans as objects, units of production, tools of the state.

The visit had laid foundations for a moral revolution to be effected by a people with a newfound solidarity. ‘Solidarity’, a pillar of Catholic social teaching stemming from the common origins of the human race in the Creator God, implied that humans should seek the common good of the whole.

In August 1980, sharp price increases had provoked worker strikes, as previously in 1956, 1970 and 1976 when violent suppression had led to fatalities. This time in Gdansk, the workers were joined by dissident intellectuals. Led by shipyard electrician, Lech Walesa, an independent, illegal, self-governing trade union, Solidarność, emerged. The right to voluntary association for the organisation of economic life having been declared at Vatican II, Solidarność had the support of the Catholic Church.

For the communist regime, Solidarność was doubly threatening. Not only was it an independent union within a system where everything was state-controlled, it was a workers’ union rebelling against a so-called ‘workers’ state’. It exposed the lie of the communist claim to represent the workers.

At first the regime felt forced by public pressure to recognise the union. But Soviet bosses in the Kremlin were even less amused and pressured the Polish government to restore ‘normalcy’.

Warsaw in May, 1981, when I arrived, was still bathed in optimism and hope. Red and white Solidariność posters were plastered everywhere. Walesa’s face, including his walrus mustache, had become famous worldwide through the  media.

When I asked the euphoric students what they would do if and when the Russian tanks arrived, they laughed and said: “We’ll just turn all the signposts around!” To my driver and me, Warsaw seemed to be doomed to suffer the fates of Budapest (’56) and Prague (’68).

Next morning as we ate breakfast in a hotel dining room, a small group of men and women entered and sat at a neighbouring table. I immediately recognised the walrus mustache at the centre of the conversation. Here was the shipyard electrician who was shaking up the whole communist word with his circle of advisors!

I found myself wondering what would become of him. Would he be imprisoned, murdered, or simply disappear without trace? He certainly had enemies in high places. Exactly two weeks later, those enemies attempted to assassinate John Paul II in Rome.

When martial law was declared in Poland seven months later, Solidarity was outlawed and Walesa and other leaders were imprisoned. The Polish Communist Party continued to find itself on the defensive, unable to meet the moral challenge. ‘This was not socialism with a human face,’ it was observed, ‘but communism with a few teeth knocked out.’

Years of struggle followed in which the Catholic church grew as the resistance church, offering oases of non-violent resistance, comfort and hope. Father Jerzy Popieluszko started a monthly ‘Mass for the Fatherland’ after martial law was declared, drawing thousands not only inside the church, but up to twelve thousand standing outside sometimes in the snow. “Will you choose for good or evil, truth or falsehood, love or hatred?” he challenged his congregations.

Within two years, Father Jerzy was brutally murdered. At his funeral, Walesa, now released, urged the people not to be provoked to violence. Popieluszko’s grave became a shrine for pilgrimage, a focal point for a national movement of resistance, solidarity and non-violence.

The pope’s visits in 1983 (when he met personally with Walesa) and 1987 continued to agitate for the recognition of Solidarity, which finally came in February 1989.

The next year, to complete the workers’ revolution, Lech Walesa became the first president of a democratic Poland – something I had never dared to imagine that morning in the Warsaw dining room.

‘I was hungry, and you threw food at me like I was an animal in…