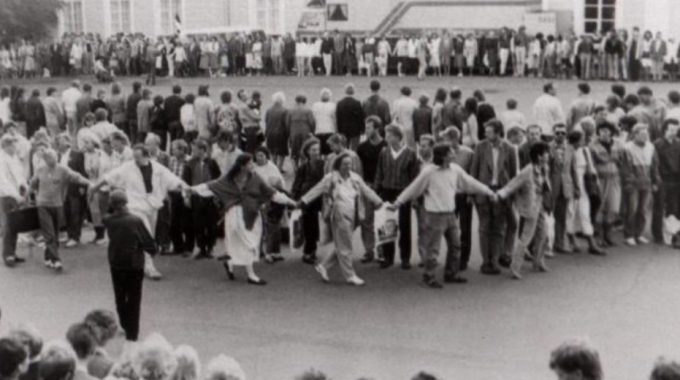 The longest human chain in history was formed across the Baltics just thirty years ago last Friday as a moral protest against the illegal occupation by the Soviet Union of these lands. It stretched 675 kilometres from the north of Estonia across Latvia to the south of Lithuania.

Exactly 80 years ago, on 23 August 1939, a neutrality pact between Nazi Germany and the Soviet Union was signed secretly in Moscow by foreign ministers Joachim von Ribbentrop and Vyacheslav Molotov, respectively. The infamous Molotov-Ribbentrop pact affected the fate of millions of eastern Europeans, dividing eastern Europe into spheres of influence, leading directly to World War II and to the occupation of the three Baltic States–Estonia, Latvia and Lithuania. On 1 September 1939, the German armed forces acted on the terms of the pact and triggered the war by attacking Poland.

Fifty years later, in 1989, as one more expression of the rising tide of moral and spiritual protest against the totalitarism of the Soviet Union, some two million people joined their hands to form a continuous human chain stretching 675 kilometres across the three Baltic republics of the Soviet Union. One in every four persons participated in the chain, called the Baltic Way, holding hands for at least 15 minutes. The public protest demanded acknowledgment of the Molotov-Ribbentrop pact, the existence of which was still denied by Soviet officials who continued to assert that the Baltic states had voluntarily joined the USSR.

The massive turnout for the silent protest was a powerful moral and emotional demand for the re-establishment of the independence of the Baltic states. Seven months later, Lithuania became the first Soviet Union republic to declare independence. Latvia gained her freedom in 1990; Estonia in 1991.

Violations
Actually the event’s beginnings were in Canada, where refugee communities from central and eastern Europe initiated Black Ribbon Day on 23 August 1986. The aim was to draw global attention to Soviet crimes and human rights violations, to the Molotov-Ribbentrop Pact as well as to the Yalta Conference when Churchill and Roosevelt gave Stalin a free hand to annex states occupied by the Soviet Union. The first Black Ribbon Day saw demonstrations in many western cities including London, Stockholm, Washington DC, New York, and Perth, Australia.

As glasnost and perestroika stimulated a new openness and rising hope of freedom in the communist world towards the end of the 1980’s, several Baltic pro-independence movements–Rahvarinne of Estonia, the Tautas fronte of Latvia, and Sąjūdis of Lithuania–met discretely to plan the 1989 protest. In Tallinn, capital of Estonia, demonstrators in a public park spoke openly of the Molotov-Ribbentrop Pact with the KGB observing. Names were taken, leaders were harassed, but surprisingly, no one was arrested. The organisers were emboldened to call for a massive, public, non-violence symbolic act, a human chain of solidarity among the three nations.

Awakening
While the Baltic Way was the largest and most important campaign of the Baltic states aimed towards regaining their freedom, it was not the first. The Freedom Monument in the centre of Riga had been the focus of the Remembrance Day commemoration for the Victims of the 1941 Deportations on 14 June 1986. After that, the former political prisoners from the Baltic states agreed upon a joint remembrance campaign on the 23 August in all the Baltic states.

On that date in 1987, several thousand people demonstrated in Vilnius, Riga and Tallinn. Police detained several hundred people. The following year, tens of thousands took part in the remembrance campaigns; while in 1989 a full quarter of the population participated in the human chain campaign. The Baltic Awakening grew into a movement uniting all three countries. This display of ‘soft power’ forced the once-powerful Soviet Union to yield to the voice of the people and admit the crimes of the past, including the existence of the Molotov-Ribbentrop pact.

In 2009, the European Union recognised August 23 as the European Day of Remembrance for Victims of Stalinism and Nazism.

Latvians have told me in recent years how they have always felt betrayed: on the one hand by Nazis and communists, and by the west on the other. The big question for them today is how much the west is prepared to stand up against Putin’s expansionism in the light of reports of thousands of Russian troops ‘on vacation’ across their border over the past few years. Earlier this month, more than 10,000 Russian soldiers and nearly fifty warships took part in naval drills in the Baltic Sea, following Russian naval exercises last month in the Norwegian Sea.

Meanwhile, the 30th anniversary of the Baltic Way last Friday inspired thousands of protesters to form a 45-kilometre human chain across Hong Kong, protesting against the erosion of liberties under Chinese rule.

Who is your hero?

The heading captured my curiosity so I grabbed the brochure from a display rack, stepping…