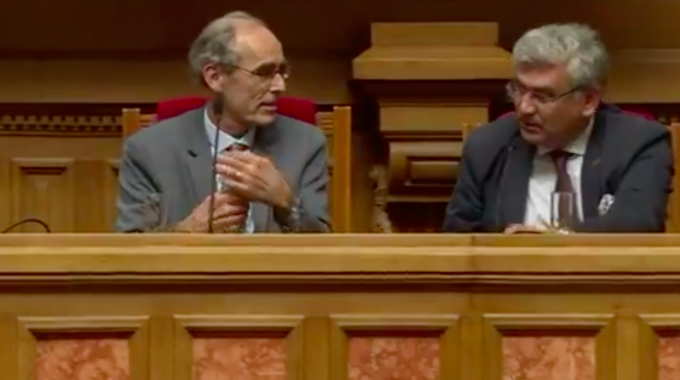 A conversation between Evert van de Poll and Dr. Teodor Baconschi after the speech of the latter on ‘Can our Christian heritage still inspire the European Project?’ (read speech here and here – watch video on Facebook here)

Evert van de Poll: I’ve been thrilled to listen to Dr. Baconschi. And I must say, it was like these documents that are sent to you in ZIP format. It’s all there squeezed in a ZIP, and then you have to unzip it. When I was listening to you, I thought I should unzip every phrase because there is so much in each of them. I would love to hear you on all of that.

My first reaction is that, in the beginning years of 2000, or after the Maastricht Treaty was signed in Maastricht in the Netherlands in 1992, the countries of what we call Eastern Europe, which really is Central and Eastern Europe, were invited now to join the West. In a sort of optimistic mood, we in the West thought we had won the contest with communism, and so now all these countries were free and can come and join us. There were some preliminaries that had to be dealt with but then they could join us. There were critics saying, ‘Should we go so far as to letting all these countries enter the European Union?’ At that time, I thought that if there was one reason I would be in favour for it, it would be that we needed the voice of Central and Eastern Europeans.

And it is exactly what you have told us tonight that we need to hear in the West. That is, I think, why all these countries from the former Soviet Bloc needed to join the European Union. People in the West say they cause a lot of trouble because they don’t always agree with the West, they have other perspectives. But I think that is precisely why we need people like you in the West, so thank you for your message. I hope that you will have many occasions to discuss these items that you have raised with people in the West.

The second thing is that you have mentioned the different experience of the people in Central and Eastern Europe and in Western Europe with Marxism. It was idealised in our universities and has educated a whole generation, including mine, whereas the other half of Europe was suffering from real socialism, and what that meant. Only people in Eastern and Central Europe can tell us about that. And so there was a dichotomy between an idealised theory and a reality which was completely different. Now the children of the generation of the 1960s who were so taken by this left-wing Maoist/Marxist ideology are taking office in politics. And their children have grown up with a disillusion: they don’t believe in the East, they don’t believe in the West. They don’t believe in any ideology anymore because they believe they’re all telling lies and fairy tales.

The only thing that counts for the post-modern generation is the individual desire. And now the children of the people in the West who idealised Marxism find themselves without ideology nor guidance. I don’t know whether this philosophy of life will take on or not in the Eastern part of Europe, but in the West we see that the individual desire becomes the norm of everything. And the law of the state is reduced to allowing every individual what he wants.

French political scientist Olivier Roysays that we’ve lost our values and we only have norms now. And the state is there to legalise what we want to have. I think that we need to have people like you to remind us of what can happen when we lose our religious heritage because that is basically the story of communism which wanted to cut off a whole people from its history.

I’m very worried that the European project is being – hijacked would be a strong word – dominated by this new generation who is liberal in economics and libertarian in ethical and moral matters. We see that there is a lot of lobbying in the European institutions going on to put pressure on countries that do not want to go as far as interest groups want to go, to put pressure on them and to present them with what is called, ‘European values’, which means the equality of all, the tolerance of any form of lifestyle, and the right of any individual to see his desires met. This is being fought in ferocious battles within the European institutions and the European court of human rights.

It is constantly the complaint of the people in the West that people in Central and Eastern Europe are blocking this process and are still hanging onto Christian and religious values, which  blocks this process of having every desire met. So we need to hear this counterpoint so that we in the West will not only follow this tendency but that we will also learn to appreciate the richness and the value of our Christian faith while it has been able to stand out this whole wave of militant atheism in the name of socialism that the Eastern half of Europe has witnessed. We need your testimony. We need your story. We need to learn from your experience to keep us in the West from falling in the same trap again. So, I want to thank you for your contribution.

Dr Baconschi: I don’t know if you really need people like me. But we all need to remember the words of Robert Schuman who said that once the Christian roots of Europe are cut off, we have the only alternative to choose, so to say, between tyranny and anarchy. And this is in the making.

We would like just to see that our Christian commitment – which is existential and not only a fact of our heritage –should not be stigmatized in a democratic European society. We need to gain all the necessary proof that the government, the European institutions and all the decisive factors within this European fabric will respect, truly, our right to confess publicly and to live, on a daily basis, our Christian commitment.

I think that the testimony of suffering of the nations once prisoners in this Eastern Bloc is extremely important for a reality check for all this Marxist revival. This is an artificial and unwanted revival when it comes to Eastern Europeans because we’ve had enough. I wouldn’t like to see our children to be living again this kind of utopia.

That is why it is on the other side of this famously globalised world somehow anachronistic to continue to speak about ‘Western’ and ‘Eastern Europeans’ because we are, after all, a relatively small Asian peninsula. It’s more and more obvious that we have the common interest and the rational interest to internalise this feeling of a common destiny and a common historical past. We have invented the dialogue between civilizations and we are the historical matrix of a global society. Our Christian values have founded and inspired the UN documents and all the charts after the Second World War. Christianity has been inspirational for the wide variety of legal instruments to keep world peace, not only as an ideal, but also as a fact.

I am pretty much sure that after these future imminent European elections for the new European Parliament, and once a new European Commission is set up, the message from both Eastern and Western Europe will be sent and heard. There will be necessary conclusions that all these anxieties about illegal migration are not necessarily expressions of xenophobia or racism, etc. It is a legitimate preoccupation for the survival of our lifestyle, the core values of our collective identity. I think it is time to get rid of the excesses of political correctness, and to avoid simultaneously fascism, communism, anarchism and nationalism. We have enough space and room for reinventing our Christian roots and values for the European Project. We also have the collective duty, beyond our generation, to find again the sense of history.

In the end, what are we supposed to survive for?

The state we’re in

Read for your future!

If Romania desires to have a chance to change its future, to find its rightful…