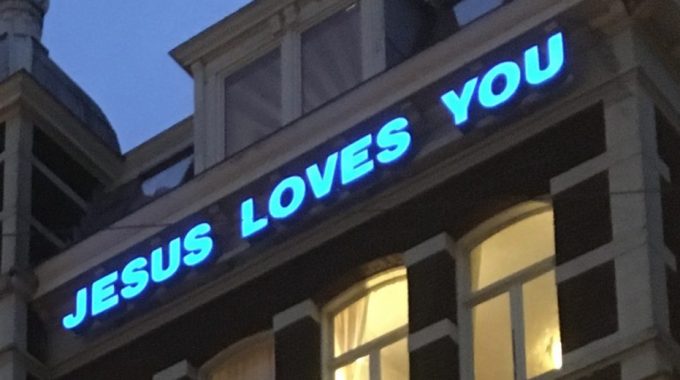 When visitors to Amsterdam step out of the Central Railway Station, they may be surprised to be greeted with the words, ‘Jesus loves you’, lit up in blue neon lights on top of one of the most prominent buildings in the immediate vicinity.

After all, in most people’s minds, Amsterdam is not associated with spirituality of the evangelical sort. ‘The world’s most liberal city’, as best-selling author Russell Shorto calls it, is better known for its tolerance of drugs and prostitution, and as one of the gay capitals of the world. Yet toleration should also make room for freedom of religion and worship. Which Amsterdam does.

For nearly forty years, those blue neon lights have beamed out their message into the streets of Amsterdam from the YWAM building where my wife and I now live, Samaritan’s Inn, no doubt provoking scorn and incredulity that anyone in this age of science and space travel would still believe such superstition.

Actually, it happened to be a scientist and a space traveller who ceremonially turned on these neon lights in the early 1980’s, riding to the fifth-floor level on a hydraulic platform. He was, in fact, the lunar astronaut James Irwin, the eighth person to walk on the moon and the first to drive on it, in his Lunar Rover.

Irwin and his fellow moon explorer David Scott spent nearly three days on the moon in 1971 collecting geological samples to be analysed back on earth. As he looked back at planet earth he was amazed: ‘It reminded me of a Christmas tree ornament – a very fragile one, hanging majestically in space. It was very touching to see earth from that perspective.’

A nominal Christian at that stage of his life, Irwin experienced an unexpected spiritual encounter on the moon that changed his life forever.

One experiment he had to set up would not work properly. After trying all he knew to do, he prayed in desperation: ‘God I need your help right now.’ Suddenly he experienced the presence of Jesus Christ in a way unlike he had ever felt on earth. He was so overwhelmed that he turned around and looked over his shoulder, half-expecting to see Jesus standing there.

Then, with out-of-this-world inspiration, he realised the solution to the problem, and was able to make the experiment work properly.

This was a moment Irwin would never forget.

On their return from the moon, as he and Scott were riding through the streets of New York in a ticker tape parade, he felt God drop the thought in his heart that he now had a responsibility to share Jesus with everyone.

He resigned from NASA within a year and set up High Flight Foundation, to ‘reach the world as goodwill ambassadors for the Prince of Peace’. For some twenty years, Irwin travelled the world telling people his message that ‘Jesus walking on the earth was more important than man walking on the moon’.

Through the words, ‘Jesus loves you’, James Irwin (who passed away almost exactly twenty years after his moon walk) would want everyone walking out of the Central Station to encounter the same Jesus who changed his life some 384,000 kilometres away nearly fifty years ago.                   [photos: NASA]