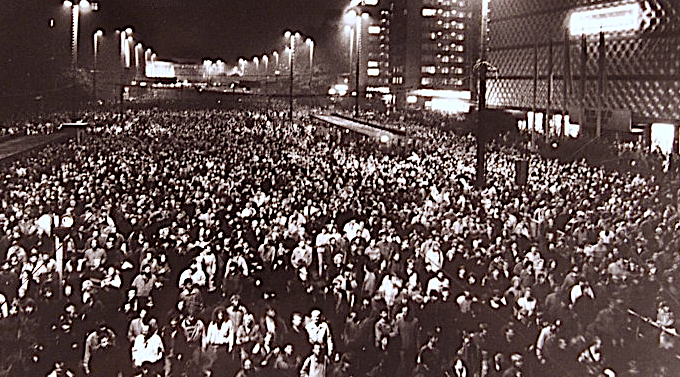 This November will mark thirty years since the Berlin Wall crumbled, unravelling communism in Eastern and Central Europe and hastening the end of the Soviet Union. A whole generation has been born and raised since then with no living memory of those events.

Those of us who do remember the string of people’s revolutions in country after country also recall the euphoric sense of witnessing the end of a system we had assumed would be around for ever and ever, amen! Although we had perhaps prayed for an end to the oppression and persecution of the church in the communist world, we found ourselves like the church in Jerusalem who, while praying for Peter’s release from prison, could not believe the servant girl when she said Peter was actually standing at the front door!

So what caused the great implosion of a system that had gained control of most of Eurasia, from East Germany to China, ruling with an iron fist and attempting to wipe out religion, especially Christianity? Some said Gorbachev, Reagan and Thatcher were the key players. Others looked to the diplomatic impact of the 1975 Helsinki Final Act and the resulting Charter 77. Still others maintained collapse to have been inevitable given the technological and managerial backwardness of the command economies: it was a matter of ‘delayed modernisation’. Yet others, like Francis Fukuyama, claimed that the West had won because it was ‘on the right side of history’ which favoured decentralised decision-making in the market economy and in politics (democracy).

While each of these factors may have played important roles, none really explains why it was at this particular time that this revolution of the human spirit was able to triumph. Several writers at the time pointed out that by ignoring the reality of evil, secular interpretations fell short of understanding the deeper spiritual revolution needed to challenge Marxism-Leninism as a doctrine and an ethic. The essence of communism was its claim of human omniscience and omnipotence, as George Weigel argues, with a millennial hope of establishing heaven on earth and offering salvation in a political movement. This utopian ideology had to be confronted with spiritual truth, not merely a secular politics which had forgotten its own moral presuppositions.

Weigel (The Final Revolution), Michael Bordeaux (Gorbachev, Glasnost and the Gospel) and Barbara von der Heydt (Candles behind the Wall) were among those who pointed to the spiritual roots of the peaceful revolution that toppled communism, and the key role of the churches.

Over the following weeks we will tell some of the stories revealing the spiritual dimension of these momentous months and years. Some of these stories we have told before in weekly wordbut need repeating until embedded in our collective consciousness.

The election of a pope who had experienced communism first-hand and whose inauguration address in 1978 carried to the communist world the message, ‘Be not afraid!’, was itself enough to strike fear in the hearts of communist leaders whose whole system was built on the politics of fear.

When Czech playwright Vaclav Havel called for ‘politics of truth’ and urged his fellow citizens ‘not to live the lie’, he inspired a resistance movement to an edifice of falsehood before Gorbachev, Reagan and Thatcher entered the world stage.

These are stories we will unfold over the coming weeks, starting with the amazing story of the pan-European picnic which took place on the border of Austria and Hungary exactly thirty years ago next week.

We will trace the rise of the Solidarity movement in Poland under the leadership of Lech Walesa, who to my great surprise one day in May 1981 walked into a Warsaw hotel dining hall to eat breakfast at the table next to mine!

The story of the hill of the crosses in Lithuania is yet another tale revealing the resistance of the human spirit to atheistic oppression; along with the Singing Revolution in Estonia and the Baltic Way, the human chain formed across the Baltic states on the fiftieth anniversary of the Molotov-Ribbentrop pact between Nazi Germany and Stalin’s Soviet Union, on August 23, 1989,  exactly thirty years ago next week.

The Prayer for Peace movement in the St Nicolas Church in Leipzig (where J.S. Bach had once been choirmaster) is yet another example of how the soft powers of peace, truth, love and prayer could overcome violence and lies.

The People’s Revolution in Romania began in Timisoara when the congregation of a Reformed pastor formed a protective circle around his house to prevent his arrest, an action that swelled into a city-wide revolt against the authorities and culminated in a crowd of thousands kneeling on the frozen city square chanting, ‘God exists! God exists!’

So, till next week,

When Erion Veliaj returned to Albania from study in America, he saw his homeland through…

No Discrepancy Between Talk and Walk