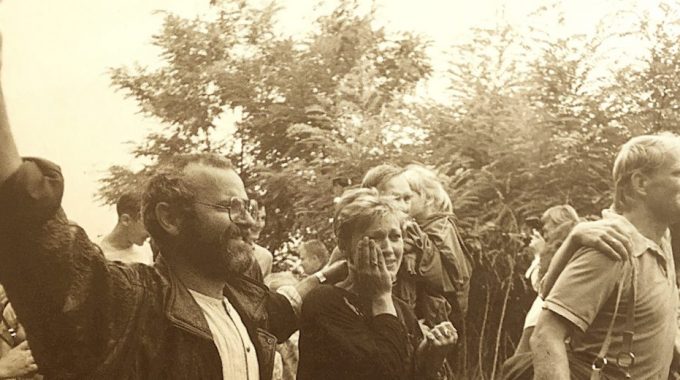 Thirty years ago today, a seemingly innocent event took place on the border of Hungary and Austria which catalysed the downfall of the Berlin Wall. We have shared this story before. Current efforts by some to turn back the clock, and a generation with no living memory of the collapse of communism, make it a story we need to retell often.

A sign on the unpaved road leading to a red-and-white boom marking the border between Austria and Hungary just outside Sopron carries the words of Helmut Kohl, former German Chancellor: History has been written on this forest road.

A large grassy field stretches out to the left. Rising above the trees is the ominous silhouette of a border tower. Here, on August 19, 1989, over 10,000 people responded to an invitation to attend a picnic to celebrate a future Europe ‘without borders’.

The idea had been born in May that year over a dinner in Debreçen, eastern Hungary. Members of the Hungarian Democratic Forum opposition party had met with Otto von Hapsburg of the European Parliament to discuss their plan.

Change was already in the air and, on this spot near Sopron, the barbed wire of the Iron Curtain had already been partially cut through on June 27 by the foreign ministers of Austria and Hungary. The rusty barrier had been in poor repair, and often the electronic alarm was set off by birds. Rather than replace it, the Hungarian authorities had decided to liquidate the obsolete Curtain, making it a ‘green border’ with patrols. The picnic celebrated this step but also aimed to demand an open border and free travel.

Jubilee
An air of jubilee prevailed as the thousands–both Hungarians and vacationing East Germans–streamed towards this border crossing. They began to help pull down the barbed wire, some stuffing it in the trunks of their Trabants to take home as souvenirs. “Baue ab und nimm mit!”(Break it down and take it with you) became the slogan of the picnic.

A symbolic opening of the border was planned, with a brief walk on the other side of the border by a delegation. A press conference seemed to delay proceedings too long for many of the East Germans, who had begun to gather in the thousands in Hungary where without visas they could often share holidays at Lake Balaton with their West German relatives.

At about 3.20pm, as the press conference was still dragging on, several hundred East Germans began to surge against the wooden border gate, suddenly breaking through and running towards Austria. The Hungarian guards were still under orders to shoot anyone attempting an illegal border crossing. Young people with only the summer clothes on their backs and clutching hand-baggage, couples with young children, began to run with the crowd, tears streaming down their cheeks. Some jumped in ecstasy as they passed through the barbed-wire covered gate. Others stopped to kiss the Austrian soil. The moment of their dreams had unexpectedly become reality.

The guards held their fire. One stooped to pick up a small child dropped in the rush, and handed him back to his mother. Six hundred or so passed through before the guards managed to get the gate closed again.

During the ensuing confusion, according to some reports, Budapest called Moscow. Gorbachev’s response was: “We will not have another 1956.”

Abandoned
East German Trabants and Russian Ladas, purchased after years of hard saving, were gladly abandoned in the picnic car park by their owners all too willing to pay the price of freedom. Smiling young people waved their newly acquired western passports issued by officials from Vienna.

A steady stream of some 200 East Germans successfully crossed the ‘green border’ nightly in the weeks following the picnic. About the 60,000 refused to go back from Hungary to East Germany, choosing instead to endure the deprivations of refugee camps in the hope that Hungary would soon open her borders.

The Hungarian government now faced pressure from East Germany and Russia to tighten the border. Western governments urged Hungary to continue her reforms.

Finally on September 11, 1989, the Hungarian government opened its borders for free travel. The thousands of East Germans in Hungary were allowed to cross into Austria and then into West Germany. In East Germany mass demonstrations, encouraged by events in Hungary, demanded freedom from Erich Honecker’s government.

When Germany celebrated her reunification, Helmut Kohl declared that ‘the soil under the Brandenburg Gate is Hungarian soil’, referring to the pan-European Picnic.

It was said that this event was ‘the pin-prick that burst the communist balloon’.

History was indeed written on that forest road thirty years ago today.

A surprising comeback? (Part I)

The angel of Berlin

The street girls called her the angel of Berlin. But now they’ll miss Patricia Green…

Things they never dreamed of

SIXTIETH WEDDING ANNIVERSARIES ARE RARE EVENTS WORTH CELEBRATING. The main reason for our down-under sojourn…