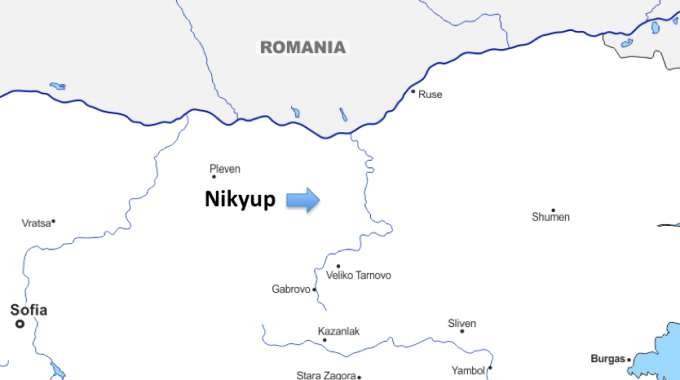 After Malta, we will continue with our second stage of this miniseries in search of the places that testify to how pagan tribes converted to Christianity.

Today, we will travel to a village called Nikyup in the Northern part of Bulgaria. This is a rather flat area situated between the Danube river in the North (which marks the border between Bulgaria and Romania) and the Balkan mountains in the South. Nikyup is located 25 km North from one of the main cities of Bulgaria, Veliko Tarnovo.

This village is mainly a small farming community surrounded by flat fields. And actually we will not stay in the village itself but follow a narrow road running through the fields along a brook. Three kilometres later, in the middle of the fields, we discover an archaeological reserve. This is, in fact, the ancient Roman city of Nicopolis ad Istrum, a UNESCO World Heritage Site since 1984.

The city was built in the beginning of the second century AD under the Emperor Trajan, on the possible site of his victory over the regional tribe, the Dacians. The city quickly became prosperous, but was later ransacked and destroyed twice, first by the Huns (fifth century) and then by the Avars (end of the sixth century), and has been a ruin ever since.

Nicopolis ad Istrum is also a place of great spiritual significance, for this land testifies to how the Germanic tribes converted to Christianity in early times. To understand how this place became significant, we need to take a step back and look at the broader picture.

In the fourth century AD, this land was called Moesia and was part of the Roman Empire. Nevertheless it was still rather unsafe as it was located near its external border. A Northern tribe called the Goths was beginning its first raids in the Empire. One of the lands they raided was Cappadocia (today part of Turkey). The people there had turned to Christianity already in the first century. Now, the Goths were spreading terror and killing many people. They also took captives back to the land they had settled in, near the Dniester River in modern-day Ukraine. But many of these captives were actually Christian.

We hardly know anything about what happened to them once they were in Ukraine. But they must have sown the seed of Christian faith among the Goths. For in 325, we find among the participants of the famous Council of Nicaea a man called Theophilus, the Bishop of the Goths. Some years later, the Goths even sent one of their most talented men, Ulfilas, to be trained in the Christian faith in Constantinople, the capital of the Roman Empire at the time. And this man was in fact a descendant of the Cappadocian captives.

Ulfilas made such an impression there that Constantine ordered him to be ordained Bishop of the Goths. After that, he went back to his people to preach the Gospel. Ulfilas quickly gained their respect and trust. But his return happened in a time of great political troubles in the land, both internal and external. Eventually, like Moses with Israel, Ulfilas led his people to settle in another land. This was the land South of the Danube river that Constantine had granted them to settle in. And this is where we are today.

Ulfilas turned out to be a key figure for the Goths. He created an alphabet of twenty-five letters, transcribing sounds that were unique to the Gothic language. He translated the Scriptures, except for the books of Kings and Chronicles. Knowing that these contained a lot of bloodshed, he feared that these would only incite his people to more warfare. And it was probably here, in Nicopolis ad Istrum, that Ulfilas introduced the Gothic alphabet and translated the Bible.

Today his work is seen as the earliest development of literature in the Germanic languages.

Later in his life, Ulfilas even took on the role of a diplomat. When the Huns threatened the survival of the Visigoths remaining in Ukraine, he went to ask the Roman Emperor of the time, Valens, to let them settle in Roman lands. But the negotiations were quite complicated.

As I mentioned in stage 17, the Council of Nicaea was called for primarily to deal with a heresy called Arianism, which denied the deity of Jesus Christ. Even if Nicaea had officially declared Arianism a heresy, the doctrine kept spreading, and even attracting rulers such as Valens himself.

So when Ulfilas negotiated with the emperor, the latter accepted to help the Goths with the condition that he would spread the Arian doctrine. Ulfilas, who was probably under pressure due to the precarious situation of his people, may have felt obliged to accept Valens’ conditions.

The descendants of the Goths continued to be men of war. Some centuries later, they invaded modern-day Italy and Spain, finally bringing the Western Roman Empire to an end.

Although Ulfilas had agreed to teach Arianism, Augustine later witnessed that it had had some positive effects on the people anyway. During the famous sack of Rome, the early Church Father celebrated the clemency and the charity of the chief of the Visigoth Alaric. He recorded in the City of God that it was “entirely due to the teachings of these Oriental missionaries (Arians), heretics though they were”.

Next week, we’ll continue to discover how the Gospel expanded among Germanic tribes.

https://soundcloud.com/aeuropeanjourney/a-european-journey-82-mansfeld-germany In Europe, we tend to take our social welfare system for granted. However, few…