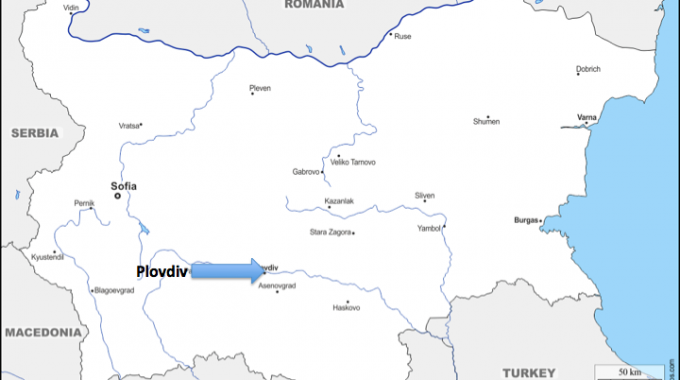 After Liège last week, we now travel 2000 km down to the Balkans, to the Bulgarian city of Plovdiv.

Located on the Southern shore of the river Evròs, Plovdiv offers a mixture of Roman ruins, of various reminders of medieval Bulgarian kingdoms and of Soviet-style buildings.

Since Plovdiv is the European Capital of Culture this year, it is a good opportunity to visit the city. And, in fact, we will take a look at three places that are quite close to each other. Each of them testifies to the fact that spiritual and political divisions have always been closely connected in European history.

The first place we will visit are excavations between the Catholic cathedral of St Ludvig and the boulevard Knyaginya Maria Luiza. These are actually the remains of the Great Basilica built in the 5thcentury AD. It is actually believed that this location was used for Christian worship already in the 4thcentury.

This place, as well as many other Roman ruins, reveal that Plovdiv (which was then called Philippopolis) was an important centre in Roman times.

It is possible that this was the place where the Council of Philippopolis that took place in the 340s. Before we look at the significance of this council, we need to take a step back and provide the context of the time:

As we know, the heresy of Arianism was dealt with in Nicaea. Arianism was named after Arius of Alexandria, who claimed that Jesus was only a man and not God. The result of the council was the Nicene Creed, which is still used in many churches all over the world. However, the Arian heresy still continued for a couple of centuries.

Since Arianism originated in Alexandria, it was obviously more influential in the Eastern Empire than in the West, and even the Eastern Emperor Constantius seemed favourable towards it. And so, several bishops especially from the West, called for a Synod in Sardica (modern-day Sofia), at only 200 km from Plovdiv, to counter the heresy.

When they gathered in Sardica, the Arians understood that they were in minority and that they would not win. Since Sardica belonged to the West, they decided to simply leave and hold their own council here in Philippopolis. It was also conveniently located in the Eastern Empire.

Sardica strengthened the theological stance taken in Nicaea. In Philippopolis however, the Arian bishops anathemized the notion that both God and man were in Christ. They also strengthened their Arian position by introducing the word anomoian (different) to define Jesus as different from God.

The second place we will visit is the nearby Garden of Tsar Simeon. The name Simeon refers to a Bulgarian king of the 9thcentury. He was the grandson of the first Christian king of Bulgaria, king Boris I. But that was the time of the Great Schism between the Orthodox and the Catholic church. This is why for several generations, Bulgarian kings wavered between both sides of the divide. Finally Bulgaria became an Orthodox country.

The last place we will visit lies just at the entry of the Garden of Tsar Simeon right across the Central Square. It is a Soviet-style building which today hosts the regional offices of the Bulgarian Post.

After World War II, Europe was divided in two blocs: the Eastern communist bloc and the Western capitalist bloc. The iron curtain separating them was actually the border between Bulgaria and Greece, which is only a 100 km South of Plovdiv. Bulgaria, of course, was part of the communist bloc. The political separation was also a spiritual one: the communist regime was in fact militantly atheist, while the West was built upon human rights, a product of Christianity.

These three different phases of European history are well represented in Plovdiv. Bulgaria has often been right at the divide, and thus it has experienced the consequences of these divisions perhaps more acutely than in other places. Also it is interesting to note that each of these divisions had both a political and a spiritual dimension.

While political and spiritual divisions have shaped much of our history in Europe, the unity of the church in Christ still has the potential to shape the future of our lands.

Convener of the Schuman Centre for French and Italian Europe

To listen to past episodes, please visit this page.