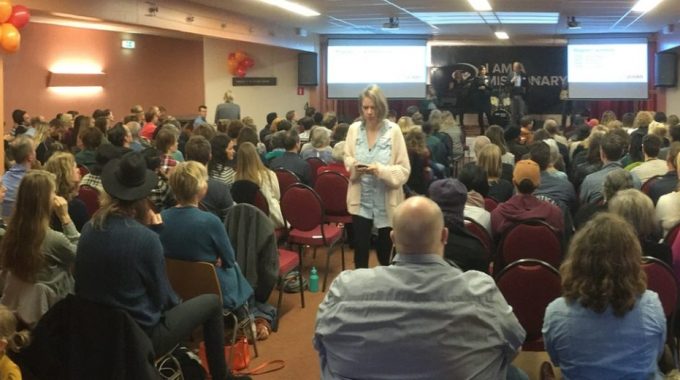 Forty years ago this summer, my wife Romkje and I and our eight-month-old baby boy moved into the house next to our newly-purchased laundry building, close to the Heidebeek training centre in the Dutch countryside.

What we were supposed to use the building for, we were not sure at the time. Maybe we were just naïve, but in our understanding we were stepping out in faith, like Abraham, not knowing where it would lead.

Floyd McClung, who four years earlier had bought Heidebeek, a former leprasorium, to establish a discipling centre, was preparing to move back into Amsterdam, leaving us in charge of ‘the farm’. On the Ark, a houseboat moored behind Amsterdam’s Central Station, he had earlier led the work of ‘Dilaram’, a ministry among world travellers and hippy seekers.

Confirmation came very quickly. On my return from Germany, Romkje told me about a visit from two older intercessor friends who told her that, while praying for us and Heidebeek, they had remembered attending a prayer meeting fifteen years earlier. A vision had been described by a woman of a fireball landing in the centre of of the country, sending out sparks which started fires across the land. This had something to do with Heidebeek’s future, they believed.

Recordings
That was encouraging of course. But there was more to come. The very next day, we had organised a dinner for several couples who had supported Heidebeek in the pioneering years. One was the local oilman and his wife, Mannus and Suze van Essen. Suze shared something she had just remembered from a prayer meeting fifteen years before. As she began to describe the vision she had seen–the exact same vision–we could hardly believe our ears! Two days in a row, the same story from two sets of unrelated people, fifteen years after the original prayer meeting, both relating the vision to the future of Heidebeek! And within a week of my question to God!

Last Saturday, our colleague Corrie Oosterhuis organised a day of prayer and celebration to mark the tenth anniversary of the Thomas a Kempis Meditation Garden she and her team have developed and maintained in the hectare of woods behind the laundry building, (since 1989 called Centrum ’s Heerenhof, the court of the Lord). As we celebrated, we realised that actually there was a fortieth anniversary to celebrate too.

Via videos and testimonies from former Heidebeekers, we heard stories of the beginnings of ministries that had spread like sparks through the land. Karen Lafferty and Belinda van de Loo talked on video about the new worship style for which ’s Heerenhof became known, and the ‘Concerten voor de Koning’ we held in all the provincial capitals in the 1980’s. We sang some of the first songs recorded on the ‘Muziek voor de Koning’ cassettes, lp’s and cd’s; the ‘Heidebeek Choir’(!) had led worship at national youth days of the Evangelical Broadcasting; we had also led the first Dutch TV programme in the ‘praise’ genre.

Reporting days
Bart Doornweerd recalled how John Wimber’s ministry inspired him to start ‘ministry in the power of the Holy Spirit’ seminars, starting in ’s Heerenhof and attended by thousands over the years. Through those events, Bart has raised literally millions of euros to support Indian YWAMers.

Miranda Tollenaar told of her memories as a teenager of the first performances of King’s Kids in ’s Heerenhof, which led to a national network of similar church-based children’s outreach ministries. Romkje recalled the very first meeting that took place in the old laundry, the reporting day of the first summer outreaches from Heidebeek, in 1979, with teams sharing stories from Morocco, Poland, Italy and Belgium–the first of so many reporting days from summer outreaches and DTS outreaches over four decades.

Space doesn’t permit listing all that has begun in Centrum ‘s Heerenhof to light fires elsewhere. Some of the first Alpha groups and marriage courses in the Netherlands from London’s Holy Trinity Brompton were held in ’s Heerenhof. A national chain of bookstores and a national network of evangelical schools both had their roots in this old laundry building.

Truly the sparks have flown!

Jesus: Name above any other name

Which 'gods' are trying to compete with the authority of Christ in Europe? In this…