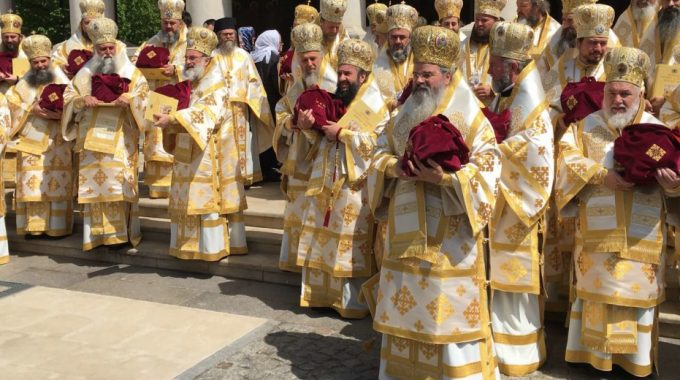 This last weekend was Easter, again – at least in Orthodox Europe and other Eastern Churches. And the Orthodox really know how to celebrate Easter in grand style.

In Romania last week, I happened to be passing the Patriarchal Cathedral in Bucharest after talking through logistics at the Patriarchal Palace where we will hold next week’s Europe Day Celebration. Standing with a small crowd, I watched in amazement as some thirty Orthodox bishops from all across the country emerged from the cathedral in resplendent Easter glory! (Somehow I got the impression they may have all shopped at the same place.)

Western Europeans are surprised when they learn of the vibrancy of the faith of the Romanians, forty-four percent of whom pray daily, the highest number in the European Union. Half the population go at least once a month to church, a figure exceeded only by the Poles. Three out of four Romanians believe their Christian faith is important for national identity. Eastern Europeans, despite having been under communism for at least four decades, have not gone the same route as the many western Europeans who in the sixties abandoned the church they grew up in as ‘suffocating’.

My taxi driver to the airport in the very early hours of Friday morning, a young father, talked unselfconsciously about the importance of religion and faith in God and Jesus Christ. He told me that as soon as it got light, the traffic would be bumper to bumper as everyone would be leaving the city to celebrate Easter with extended families. On Saturday night around 11pm, everyone will be going to the church to attend Easter mass. Traffic will come to a standstill as people put their food baskets with lamb, cakes, wine for the Easter meal at the side of the road waiting for the priest to pass and bless the food. Inside the church, they will all light candles from the church candles to symbolise the Resurrection of Jesus.

Someone will carry the Holy Light back home, where, on arrival, they will make a cross on the beam using the candle smoke. Traditionally this is to protect the house from evil. The family then enjoy a special bread called ‘Pasca’ eaten only at Easter, made from fine wheat and decorated with a cross. An Easter meal of lamb will follow, something Romanians do not often eat.

Imperialistic
Within the European Union, there is a wide range of attitudes towards church and religion. Too often however westerners assume that all Europeans have gone through the social changes the west experienced in the sixties. Radical changes in views about sexual relationships, family and marriage are assumed to have happened all over Europe, and the new ‘values’ emerging are assumed to be ‘European’ values. Which implies many Romanians are not ‘European’.

Hence the need for dialogue, for two-way listening, north and south, east and west, as we will do at the upcoming forum. EU expansion eastwards has not been matched by expansion of western awareness of the east. Westerners are often seen to be arrogant and imperialistic towards easterners who don’t automatically accept the ‘new’ as better.

Take the issue of the date of Easter, for example. This year, westerners celebrated this festival a week earlier than the Eastern and Oriental Churches. Which westerner could say why? Easterners know very well. It has to do with history, about which we in the west don’t really care very much. We’re not really so interested in the past as we are in starting with a clean slate to shape our own futures. Yet we have little understanding how much our past has already shaped who we are and why we do things in certain ways.

Two calendars
Briefly, then: at the Council of Nicaea in 325AD, leaders from across the then-Christian world agreed on a formula to celebrate Easter on the same date: the first Sunday after the first full moon following the spring equinox (March 21); but always after Jewish Passover, as Jesus and his disciples had celebrated Passover the night before he was crucified.

However, the Julian calendar, which had been in use since 45BC, was a solar calendar. The Catholic Church adopted the Gregorian lunar calendar in 1582 in order to compensate for the loss of days which built up over a long period. Most countries have since followed suit, but the Eastern churches have held to the Nicene Council formula, when Easter falls anywhere between April 4 and May 8. For Catholics, and for the West with them, Easter falls between March 22 and April 25. Sometimes the two Easters fall on the same dates, as in 2010, 2011, 2014 and 2017. But this won’t happen again until 2034!

Which all adds to the challenge of unity with diversity, a challenge demanding dialogue and listening!

The Restoration through the Spirit

THE MURDER OF FILM-MAKER THEO VAN GOGH, IN THE STREETS OF AMSTERDAM FOUR MONTHS AGO,…