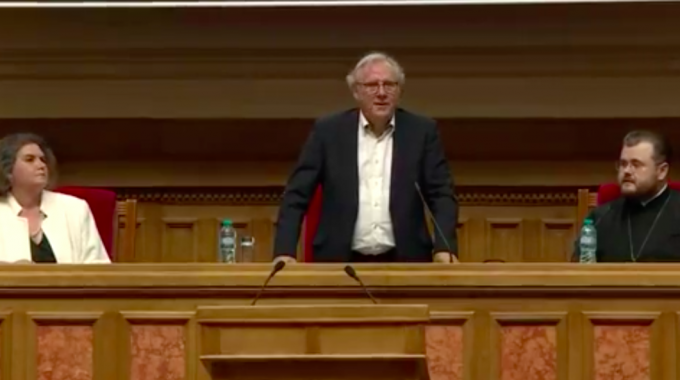 The opening speech of the director of the Schuman Centre for European Studies, Jeff Fountain, during Europe Day Celebration .

I hope that the heart of this event is going to be our Lord Jesus Christ because we are here united in our understanding that he is the Lord of Europe and it is the story of Jesus that by far has been the single greatest factor in making Europe, Europe.

We don’t often recognize that as we look around Europe today. We need to redefine our understanding of Europe today in the light of what God has done in the past. We find ourselves living in a Europe that has become a real paradox. A Europe that has been shaped by the story of Jesus and by the rejection of that story.

And we are very, very grateful to be able to be in this place and in Romania, an Orthodox country with a strong Orthodox history because it is forcing us to come to face some of the realities of Europe today that many of us from the West are very ignorant about and we are hoping on this day and tomorrow to have much dialogue and to come to a much greater understanding of what our commonalities are from East and West and what has divided us in the past and what we need to do about that.

Today is Europe Day. There are some countries where that is quite celebrated and there are other countries, such as my own country of the Netherlands, where you would be lucky to find one in a hundred people who know what Europe Day is all about. And this is the reason why we have held these events to try to make us aware firstly, of the Christian roots; the influence of Gospel on the shaping of Europe in the past. Also, on the beginning of what has become the European Project. And then to ask, ‘What is our responsibility as Christians in shaping the future?’

Now we would love to be able to fill a place like this to overflowing on a day like this. But the reality is that there is very little awareness of the significance of this day. That doesn’t faze me because we have seen that all through history, God has worked through faithful minorities. My wife and I take people on journeys every summer through Europe in search of faithful minorities who have influenced Europe through their belief that Jesus is the Lord. And so, we are very grateful that we can be here. Particularly, this is the first State of Europe Forum that we have held in a country with an Orthodox background, and that gives a very different perspective on what is going on in Europe today.

So, we are going to go back a little bit in our history concerning what is the faith that has shaped Europe in the past and how much commonality do we have East and West and what are the common areas. We’re going to be looking particularly at the Nicene Creed. Now, someone from my background, I was raised in a Baptist background, we never said the Nicene Creed in our services. And I heard vaguely about it. But from my background, we felt like, well, Church history wasn’t really all that important at all. What was really important was the present. But over the years, I have come to appreciate the richness of other traditions. And I believe it is important for us all as Christians to understand something of what has gone on in the past to understand how we’ve come to where we are at today and to recognize how totally relevant these issues are from the past for our headlines today. We’re going to be exploring some of that shortly.

So, I am very pleased that Father Mavrichi was prepared to engage with us tonight and I’ve asked him if he would lead us as we say the Nicene Creed, as it is written in our programs here. And then we are going to have a conversation about how this Creed has really been the creed that has united and has given Europe a common faith basis and yet it became the creed that, very sadly, led to the great schism between East and West with deep implications for the history of our continent. Now most of you will be aware of some of that controversy and how it all focused around one particular phrase. So we are going to be saying this Nicene Creed together in the Orthodox version which was, actually, the original version, not in English of course, drawn up by people like Athanasius, Coptic father, one of the church fathers. And it was accepted in the first council, the Nicene Council in 325 AD, by all churches at the time as a statement of our common Christian faith.

And so I’d like to ask Father Mavrichi if he would lead us in reciting that and we can perhaps all stand and read it from our programs here.

We believe in one God,

the Father Almighty, maker of heaven and earth,

and of all things visible and invisible.

And in one Lord Jesus Christ,

the only begotten Son of God, and born of the Father before all ages.

Light of Light; true God of true God; begotten, not made;

Consubstantial to the Father, by whom all things were made;

Who for us men and for our salvation came down from heaven,

And was incarnate of the Holy Ghost and of the Virgin Mary,

And was made man.

Was crucified also for us under Pontius Pilate, suffered, and was buried.

And the third day rose again, according to the Scriptures;

And ascended into heaven, sits at the right hand of the Father;

And shall come again with glory to judge the living and the dead;

Of whose Kingdom there shall be no end.

And in the Holy Spirit,

the Lord and Giver of Life, who proceeds from the Father;

Who together with the Father and the Son is to be adored and glorified;

who spoke by the prophets.

And one Holy, Catholic, and Apostolic Church.

We confess one baptism for the remission of sins.

And we look for the resurrection of the dead, and the life of the world to come.

DID YOU GET RYANAIR'S OFFER THIS WEEK TO CELEBRATE HALLOWEEN IN SPAIN WITH "FIENDISH GHOULS,…

While storms rage across a muslim world upset with the pope, I will not be…