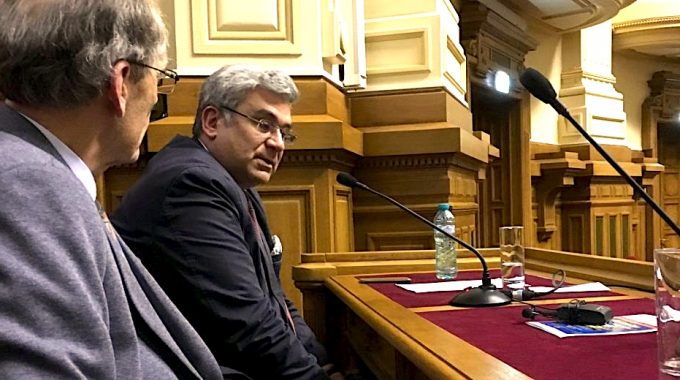 “Without its Christian identity, the European Union represents nothing more than a supranational bureaucratic framework from which an increasingly large number of European nation-states feel estranged.”

In clear, direct language, the audience in the imposing Patriarchal Palace in Bucharest heard the former Romanian ambassador to the Vatican, Paris and Lisbon open this year’s State of Europe Forum, an event held annually in the capital of the country holding the EU presidency (see livestreamed video).

A devout Orthodox Christian, Dr Teodor Baconschi (right in photo), who also served as his country’s Minister of Foreign Affairs, said the Eastern view was that the West, having forsaken its Christian identity and traditional values in favour of political correctness, had escalated Euroscepticism and empowered populist critics.

The Europe Day Celebration last Thursday evening aimed to highlight the role of the faith of Robert Schuman, French Foreign Minister, in birthing the European project through his three-minute Schuman Declaration on May 9, 1950.

The opening address followed a welcome from Fr Ionut Mavrichi, representing His Beatitude, Patriarch Daniel. After a recital of the Nicene Creed, I invited Fr Mavrichi to discuss the role of the creed in the shaping of Europe. In a previous ww I had written about the creed which both united Europe by giving a common framework of faith to the peoples of Europe, and yet divided East and West in a tragic schism which lasted over nine centuries.

Yes, affirmed Fr Mavrichi, the Nicene Creed had indeed played a foundational role in the forming of Europe. He cited a Romanian philosopher who had debated the German historian Oswald Spengler, who viewed the beginnings of Europe as being in the north with Charlemagne. No, countered the Romanian, the true beginnings of Europe were in 325AD with the Nicene Council. Its formulation of the Christian faith from the revelation of God through Christ had given Europe a common framework for nearly seventeen centuries. Sadly the ‘filioque’ controversy, over a phrase added by the western church, had led in the 11th century to the mutual excommunication between East and West.

Numbers concerning Christianity in many parts of western Europe today may be disappointing, he added, yet as recent events had shown – referring to the Notre Dame fire – many were still under the spell of the cathedrals.

“Today we see a Europe trying to reinvent itself by denying its Christian roots. Hopefully we will come to our senses as Europeans. I am a European and my beliefs should also be represented at the European level,” Fr Mavrichi said in conclusion.

Dr Baconschi continued this argument in his address, asserting that the importance of religion was being underplayed in forging a common European destiny.

“I count myself among the critics of radical secularism,” he offered, “a phenomenon which, I think, can partly account for the rise of Euroscepticism across the Old Continent.”

Europe had reconnected with the profound wisdom of the Christian experience after 1945, he recalled, heralding the longest period of peace and prosperity in our continent’s history. It was our duty therefore to constantly revisit the circumstances that turned the dream of a united Europe into reality. The European project had been both conceptualised and put into practice by Christian Catholics and Protestants. The Christian-Democratic doctrine had been inspired by the social doctrine of the Catholic Church, outlining a free and peaceful European Union. National sovereignties were not to be undermined but rather unified under the Christian-inspired principles of subsidiarity and solidarity, and a personalist conception of human rights.

However, under liberalism and secularism, the future had come to be defined in opposition to the past. No dogma or taboo had been meaningful enough to challenge the utopian quest for unrestrained freedom. Today most Europeans aspired to nothing more than a life of comfort and had lost their metaphysical aspirations.

European enlargement had embraced many post-communist nations who still defined their identity in relation to traditional Christian values. The cultural rift separating east and west had become more apparent. This begged the following question, proposed Dr Baconschi: will Brussels and the governments of the 27 member-states realise the importance of religious identity in bridging the cultural gap between the Eastern and Western halves of the EU?

“We do not want to be part of a European community that renounces its Judeo-Christian identity and disregards its citizens’ desires to preserve their ways of life, traditions and core values,” he warned.

Dr Evert Van de Poll (left in photo), responding as a western Protestant, said that the West needed to hear this message from the East. The voice of values had been silenced. We needed people like Dr Baconschi to remind us what happened when we lost our values, he stated.

A solid foundation had been laid for the following day’s forum in the Parliamentary Palace – to be reported in the next Weekly Word.

The message behind the myth

The Virgin and the Divorcee

Europe, the nursery of world Christianity, has itself become a most challenging and strategic mission…