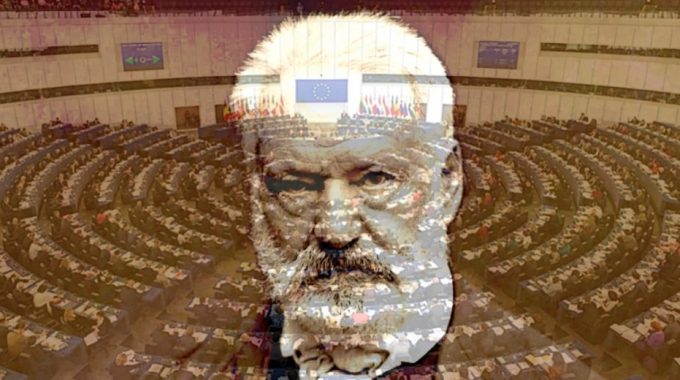 What would Victor Hugo have made of this weekend’s European elections?

The great French author of The Hunchback of Notre Dame and Les Miserables belonged to a long line of thinkers and visionaries stretching back to William Penn (who proposed a European Parliament as early as 1693), who foresaw the day when the nations of Europe would trade their weapons for the ballot box.

My Canadian friend Pierre alerted me to Hugo’s opening speech on August 21, 1849, at the International Peace Congress in Paris. One of a series (London 1843; Brussels 1848, Paris 1849, Frankfurt 1850, and London 1851), the congress was attended by two thousand delegates.

Hugo, as chairman, opened as follows:

A day will come when your arms will fall even from your hands!
A day will come when war will seem as absurd and impossible between Paris and London, between Petersburg and Berlin, between Vienna and Turin, as it would be impossible and would seem absurd today between Rouen and Amiens, between Boston and Philadelphia.
A day will come when you France, you Russia, you Italy, you England, you Germany, you all, nations of the continent, without losing your distinct qualities and your glorious individuality, will be merged closely within a superior unit and you will form the European brotherhood, just as Normandy, Brittany, Burgundy, Lorraine, Alsace, all our provinces are merged together in France.
A day will come when the only fields of battle will be markets opening up to trade and minds opening up to ideas.
A day will come when the bullets and the bombs will be replaced by votes, by the universal suffrage of the peoples, by the venerable arbitration of a great sovereign senate which will be to Europe what this parliament is to England, what this diet is to Germany, what this legislative assembly is to France.
A day will come when we will display cannon in museums just as we display instruments of torture today, and are amazed that such things could ever have been possible. (…)

Sadly, between this speech and that of Robert Schuman a century later which finally launched the European project, France and Germany would become locked in deadly war three times, dragging many other nations into the bloody conflict with them on the last two occasions.

Hugo’s perspective helps us realise we cannot take the privilege of voting in the European elections for granted. They are unique in Europe’s history of conflict. Hugo and his fellow conferees would have viewed our chance to settle issues across Europe through the ballot box with great envy. Yet low turnout reveals that we do not properly understand this privilege. This weekend, however, saw the highest turnout in the EP elections ever: over fifty per cent for the first time.

Brexit helped that. There has been far more attention given to the question of EU membership across Europe than ever before. Nobody is suggesting other nations should follow Britain into a fog of confusion. The dominant issue of the elections was ‘more or less Europe?’ Migration, environment, economy, security and corruption became secondary.

The fear (or hope) that anti-European parties, disguising their platforms in European rhetoric, would win enough seats in the parliament to stonewall procedures and generally cause stalemate did not come to fruition. Hugo probably would have managed a wry smile at Marine le Pen’s efforts to turn the clock back to old-fashioned nationalism. Although she did well to claim an historic victory over President Macron, her party actually lost seats in the parliament. Geert Wilders’ party in the Netherlands lost all three seats. Matteo Salvini’s far-right League party won convincingly in Italy but the new anti-European alliance he had hoped to form with Le Pen and Wilders in the European Parliament will struggle to even reach one tenth of the 751 seats, not the anticipated third.

And what about Nigel Farage’s resounding victory over the Tories and Labour, just as Mrs May resigned? A new prime minister needs to be chosen but the government’s majority is becoming so tenuous with defections from the Conservatives that a newly elected PM could face an almost immediate vote of no-confidence. Which could mean new elections, and no-one can guess who would win. Meanwhile the Brexit deadline of October 31 is sneaking up. New laws may have to be passed to extend the deadline further… The possibility of a new referendum on Brexit has never been so great since the original referendum. Current polls favour Remainers to Leavers at 54-46 per cent. And despite the hoohah over the Brexit party’s victory, 37 of the British seats in the European Parliament are Remainers, 33 Leavers.

Promise Of The Future

Is a double negative positive?

THE PROFESSOR WAS EXPLAINING TO HIS STUDENTS that, while in many languages a double negative…

From confrontation to incarnation

'EUROPE IS FILLED WITH BELIEVING UNBELIEVERS AND UNBELIEVING BELIEVERS'. So said Daniel Hari, a soft-spoken…