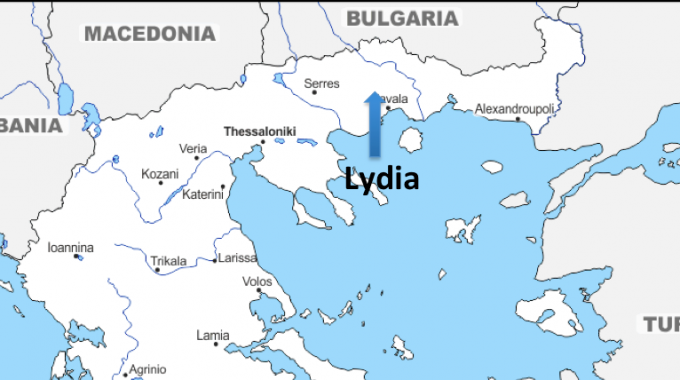 Today we are visiting the region of Eastern Macedonia in Greece. And more specifically, we will go to the village of Lydia.

The village is located in the Drama Plain, right at the foot of the Lekáni mountains, 15 km North-West from the seaside town of Kavála. The village is actually very near the ruins of the ancient town of Philippi.

If we begin our walk in Lydia and go along the main road for about a kilometer towards the South, we will reach a stone church building located near the shore of the river Zigakti.

You might have already guessed where we are through this introduction. The name of the village, Lydia, and the ruins of Philippi both take us to Paul’s visit to the region, as documented in Acts 16.

And the church is actually not a typical one, but is, instead, the Baptistery of Saint Lydia. It is the very location where Lydia was converted and baptized and possibly became the first European Christian (Acts 16:14-15).

What does the Bible recount about this event?

The story goes back to about twenty years after the Resurrection of Jesus. Paul, who had been dramatically converted while on his way to persecute the Christians in Damas, was now evangelizing Philippi, his first European town. His Roman citizenship, his upbringing at the feet of the famous rabbi Gamaliel in Jerusalem and his fluent knowledge of Greek had made him a perfect candidate to bring the Gospel to both the Jews and the Gentiles.

A couple of years earlier, Paul had already undertaken a first missionary trip to the island of Cyprus and modern-day Turkey. This second journey brought him and Silas through modern-day Syria and Turkey again, where Timothy joined them. They then tried to reach Asia first (modern-day Southwestern Turkey), and then Bithynia (where Istanbul and Nicaea are located – see stage 17) but in each case, they were stopped ‘by the Spirit’.

While they were in the harbor city of Alexandria Troas (modern-day Dalyan) at the shore of the Aegean sea, Paul received a vision in the night of a Macedonian urging him to come and help them. Through this Paul finally discovered which direction the Spirit wanted him to follow. And soon after, they headed for Neapolis (near today’s Kavála), passing by the island of Samothrace.

They travelled on to Philippi which, as the Bible records, was a leading Macedonian city and a Roman colony at the time. Since there was no synagogue in the city where he could preach, Paul chose to preach in a proseuché, that is literally a place of prayer. And this proseuché was located right here where the baptistery now is, at the shore of the river.

Paul’s first audience was comprised mainly of women. And the first person to have responded to his message was Lydia. Not long after, Paul and Silas were thrown into jail because of false accusations. After their miraculous liberation, Paul and Silas left Philippi and travelled along the Via Egnatia to Thessaloniki.

The new community in Philippi continued to live on after their departure. In Paul’s letter to the church of Philippi twelve years later, we discover that the community was still predominantly led by women, a fact that may sound surprising in a male-driven culture. And still today people are being baptized in the river Zigtaki right where Lydia was first baptized.

Today, we recognize Lydia as the first European convert. But is this accurate?

Firstly, Paul would have probably not understood what we mean by ‘Europe.’ For in fact, as we discovered in an earlier stage (Les Escaldes, Andorra), the concept of Europe appeared only nearly eight hundred years later. In the Middle Ages, Europe was seen as ‘the land of the Christians’ in a time of Muslim threat. Prior to the Ottoman invasions in the 12thcentury, Turkey had been predominantly Christian and would have been identified as a part of Europe.

The Baptistery of Saint Lydia is nevertheless an important memorial for us Europeans. It reminds us of the first steps of the spread of the Gospel among the peoples of Europe, a message that gave a unique understanding of life and which was at the basis of the development of the European civilization. But this location also reminds us that non-Europeans such as Paul, Lydia and many others, played a crucial role in the spread of the Gospel in Europe.