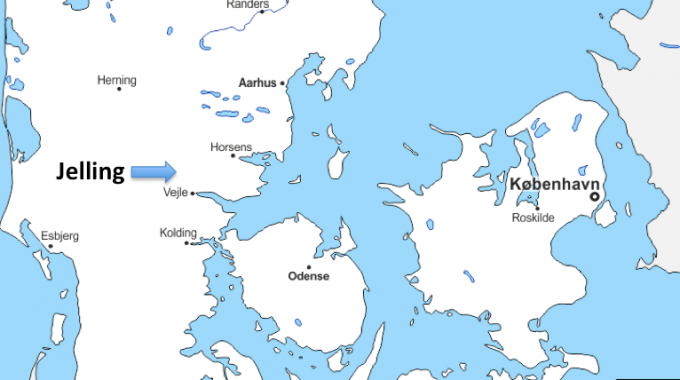 Today we are visiting the continental part of Denmark, that is the region of Jutland.

We will specifically visit a village 12 km North-West from the town Vejle called Jelling.

As we enter the village surrounded by idyllic meadows and fields, we discover typical red brick houses and white houses with black roofs. A bit further along there is a beautiful park next to the main road, with two Viking mounds, a white church and a graveyard. As we walk along the footpath towards the church, we discover two runic stones, each under a glass casing.

What were these mounds and stones all about?

Firstly, the mounds were typical Viking pagan burial sites. Secondly, the runic stones were commemorative monuments usually erected by wealthy people or rulers for their deceased relatives. The name ‘runic’ refers to the alphabet used in the engravings on the stones.

In the Viking Age, Jelling was actually the royal seat of the kings of the Danes. And the story of the stones is as follows: the smaller stone was erected by the 10th century king Gorm in memory of his deceased wife Thyre.

But the second stone which is the largest is probably the most famous runic stone of all, so much so that it has been nicknamed ‘the birth certificate of Denmark’. Why is this?

In fact, this stone with three facets was erected by Gorm’s son, Harald Bluetooth. While the mounds testify to the pagan past of the Danes, the big runic stone is a testimony of their shift towards Christianity.

On one facet, we discover the image of a giant snake attacking a lion. Then on another facet we find the figure of Christ with His arms wide open, maybe crucified, in front of what looks like branches. The artwork displayed on this stone shows an interesting mixture of pagan and Christian imagery. Some believe that the artwork describes how Christianity overcame paganism. And the branches could be a reference to the god Odin who had been entangled in a tree for nine nights.

Nevertheless, we find more clues about the meaning of this stone on yet another facet. It reads:

King Harald commanded this monument to be made in memory of his father Gorm and his mother Thyre. That Harald won the whole of Denmark and Norway and made the Danes Christian.

In reading this, we find out that Harald Bluetooth had several reasons for erecting this stone. One was to raise a memorial for his deceased parents Gorm and Thyre.

But the rest of the sentence explains why this stone has a national significance. Firstly, here we have the oldest known reference to ‘Denmark’, which came to mean the territory of the Dane people. Secondly, Harald claims that he was the one to make the Danes Christians.

However, history tells us that Christianity had first made its appearance in Denmark nearly two hundred years before Harald was born. This was shortly before Charlemagne became emperor of the Franks, the southern Christian neighbours of the Danes. The enmity between the two nations slowed the spread of the Gospel among the Danes, as Christianity was primarily seen as the religion of the enemy.

Soit was only under Harald Bluetooth in the 10thcentury that Christianity finally took root in Danish soil. An interesting detail about Bluetooth was that he was named like this because he loved eating blueberries so much that his teeth turned blue. And today, the merging of his runic initials is actually used as the Bluetooth symbol on our phones or computers.

So how did Christianity take root in Denmark under the reign of Bluetooth?

A key person in spreading the gospel at this time was the Archbishop of Bremen, Unni, who preached in Jutland and in the Danish Isles. After his death, the work continued with his successor Adaldag. He established the first three bishoprics of Denmark, in Schleswig (today in Germany), Ribe and Aarhus. It was also through his ministry that Harald Bluetooth was personally converted. Later on, due to the invasion of Denmark by Otto II, Harald was forced to negotiate with the Frankish emperor. As a result of these negotiations, he had to build a cathedral and a church in the former pagan sites respectively of Odense and Roskilde.

Finally, here in Jelling, Harald built a church to give a Christian burial to his father, who had been previously buried in one of the two pagan mounds. This may explain why one of the mounds is indeed actually empty.

Just as the empty tomb of Jesus testified to his resurrection, the empty mound and the Jelling stones are a powerful testimony of the adoption of Christianity by the Danes.