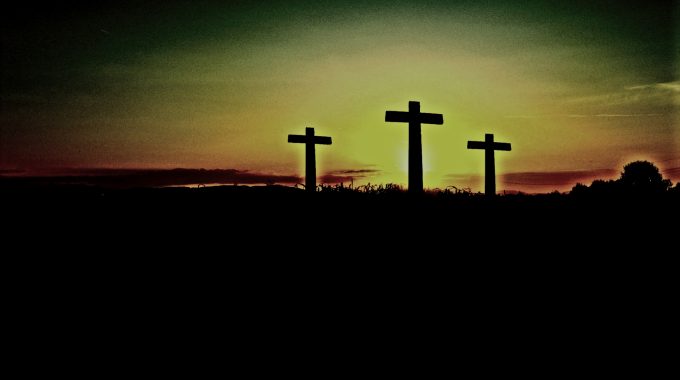 At the eve of Good Friday, we are republishing Jeff Fountain’s weekly word of the 17th of April 2006. In this article, Jeff Fountain explains why the death and resurrection of Jesus Christ still matters today.

I missed Good Friday this Easter.

We left for the airport in Samoa late on Thursday evening to catch our flight to New Zealand, and a few hours later arrived in Auckland – early on Saturday morning, En route we had crossed the International Dateline and lost a whole day: Good Friday!

But celebrating Resurrection Sunday without experiencing Good Friday felt incomplete and unsatisfying. For resurrection can only follow death. Christ’s glory could only follow his suffering. No pain, no gain!

This Biblical account of the death and resurrection of Christ was commemorated by a faithful minority all over Europe this weekend – and next weekend will be celebrated by the Orthodox faithful.

The vast majority today, however, live as though Good Friday simply doesn’t matter. For post-Christian and post-modern Europeans, stories about Jesus’ death are simply myths irrelevant to life in the twenty-first century. For both Muslim Europeans and fans of Dan Brown’s The Da Vinci Code best-seller, Jesus never died on the cross. According to Brown, he married Mary Magdalene and sired an ancestor of European royalty. Muslims claim Jesus simply swooned on the cross, later to recover in the coolness of the grave.

Even one of my favourite writers, Rabbi Jonathan Sacks, whose books often apply penetrating biblical insights to vexing contemporary issues, rejects Christian claims about the Easter events. In his (standard Jewish) view, the death and resurrection of Jesus was not the fulfilment of Old Testament themes of atonement, and thus not the central ‘salvation’ event in human history.

So on what grounds do Christians claim that Good Friday really does matter?

In the first place, historical. ‘Sunday’ only makes sense if ‘Friday’ really happened. No crucifixion? No resurrection. And vice versa. Without the resurrection, the cross was simply a tragic dead end. The reports of these space-time events can still be investigated from the distance of two thousand years. No contemporary Jew would have made up this story. No one would have chosen for a messiah who suffered so shamefully. No one would have made women the first witnesses of the resurrection. The original eye-witnesses-listed by Paul in 1 Corinthians 15:5-8-had to piece the evidence together and arrive at the logical and inescapable conclusion. What they had witnessed in both the death and resurrection of Jesus, they came to realise, was nothing less than the hinge event of human destiny.

And in the second place, theological. Theologians have explained the cross in at least three ways:
· as a demonstration of God’s great love;
· as a ransom paid to free us from the hold of evil captive forces;
· and, as a necessary perfect sacrifice to atone for human sin.
Recently in English evangelical circles, this last point has flared up into controversy, as some have claimed that ‘substitutionary atonement’ falsely justified violence and individualism.

Sometimes these emphases and their variants have been unnecessarily pitted against each other. But they each reflect facets of biblical truth. They each can affect how we live our contemporary lives. Europeans need to rediscover the love of God as still the most transforming power on earth – for individuals, families, communities and nations. We all must recognise our need for deliverance from the very real forces of darkness at work in Europe in corporate structures, social institutions and centres of power as much as anywhere else on our planet.

And each of us needs to be forgiven, to know that we are forgiven, and to be released to forgive others and break the cycle of vengeance, bitterness and envy all too prevalent in Europe today.

That’s why Good Friday really does matter. So next year I’ll plan my travel more carefully!

This coming Wednesday night, at nine minutes past eleven, our planet will begin to tilt…

Can Europe be awakened, revived or saved? Or is the ‘post-Christian’ continent, the former heart…