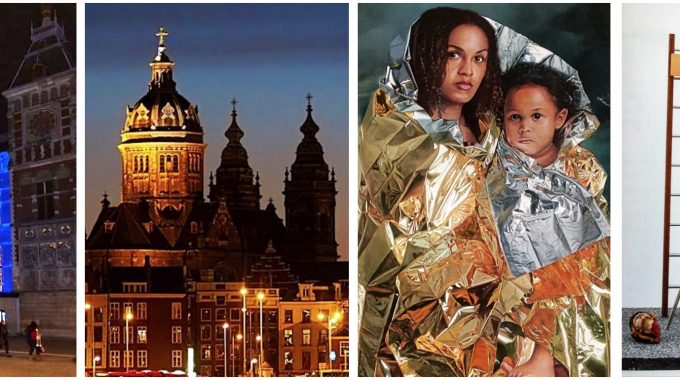 The world suddenly shrunk on Friday. Events in a far-away peaceful corner of the world shocked the global community. Distant idyllic New Zealand–‘Godzone’–had been wrenched into a world of violence usually only experienced by Kiwis on their television screens.

In a rare moment of international solidarity, both the Eiffel Tower and the Empire State Building were cloaked in darkness. And here in Amsterdam, right opposite where this Dutch Kiwi sits to type, the New Zealand flag was projected onto the Amsterdam Central Station facade, stirring for me bitter-sweet emotions.

The carnage in Christchurch provokes outrage, anger and confusion in our hearts and minds. Yet again, in flesh-and-blood reality, evil and terror has struck leaving us feeling helpless and vulnerable, crying out ‘why??’.

Two days before the tragic drama down-under, my wife and I had a foretaste of that anguish when we visited several of the exhibitions of the Art Stations of the Cross on display in the centre of Amsterdam through the Lenten season. They represent fourteen events of Jesus’ final journey through Jerusalem – from his condemnation to crucifixion and burial.

“Why have you forsaken me?”

The exhibition’s website explains: ‘Jesus’ words from the cross resonate with the anguish felt by many people today. This feeling is especially acute for those on the margins of society, from refugees to victims of trafficking. Art Stations of the Crossis a unique public art project, taking visitors on a creative and contemplative journey, using the story and symbols of the Passion to reflect upon contemporary injustices. This exhibition charts its own Via Dolorosa, or Way of Suffering, with stops in 14+1 sites across the city of Amsterdam … through secular and religious spaces.’

The journey begins right opposite the Central Station, in the St Nicolas Basilica with its magnificently decorated interior, including the fourteen stations permanently depicted around its walls. Right under the first station, where Pilate deliberates over Jesus’ fate, stands a 125 x125cm oil painting rendered with photographic realism. At first glance it looks like an icon of a Black Madonna, worked with gold and silver foil. The realisation then dawns that here is a refugee mother and child wrapped in a thermal foil survival blanket, against the background of the Mediterranean Sea. As Europeans, we suddenly find ourselves in Pilate’s shoes: will we also condemn them to death by refusing them refuge?

In the Red Light district behind our apartment, we found the thirteenth station displayed in a former schuilkerk or ‘hidden church’, Our Dear Lord in the Attic. It depicts the moment when Christ’s body was taken from the cross. But not with the loving and sorrowful care depicted in traditional art.

My wife literally cried out in repulsion when she saw the decapitated bloody body, with one severed arm still hanging by the nail, while the corpse dangled from its feet. The artist’s description explained the work’s title, The Last Days, as hinting the end of the Christian era, and of the reality of the increase of religiously motivated violence, a grim portent of things that were to come.

Instead of easy answers, Art Stations of the Cross aims to ‘provoke the passions: artistically, spiritually, and ethically’. Similar projects have been previously exhibited in London, Washington DC and New York City raising awareness for those in need of refuge and compassion.

The Amsterdam exhibition focuses on the port-city’s historic identity. ‘The sea can be a place of miracles – as the Bible teaches – but it is also a stage of trauma. Syrian refugees attempt perilous crossings of the Mediterranean to escape their country’s civil war. Young people have arrived in Europe via shipping containers, only to be enslaved in sex-work (including right here in the Red Light district). And rising water temperatures cause by climate change have led to unprecedented natural disasters, especially impacting the poor.’

In Amsterdam, a 15th station has been added: the resurrection. In the Holy Sepulcre Chapel in the city’s oldest building, the Oude Kerk, stands an empty canopy designed for a group of statues depicting the burial of Jesus destroyed during the Iconoclasm of the Reformation. The grave is thus empty. The gothic window has been covered in red foil transforming the empty chapel with a new sort of resurrection presence.

‘After the burial and resurrection of Jesus, the world’s problems have not been solved, but millions of people see life differently. The message of Easter gives new courage. Everything can be seen in another light.’

Friday’s tragic massacre added yet another station to this Via Dolorosa: the flag on the station facade, depicting–for those with eyes to see–the Cross. Terror and evil are not the final word.

Sir Fred Catherwood was a unique figure in the British and European evangelical world. Vice-president…

If Europeans studied their history, they would count their blessings, realise they were freer and…

Demography is destiny (Part I)

An article from Jim Memory for Vista Magazine. A demographic perspective on secularisation The famous…

Globalisation- where is it taking us?

Prabhu Guptara: Globalisation - where is it taking us?