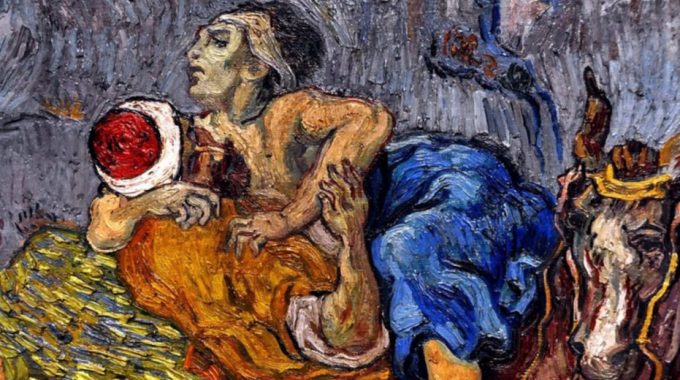 In many European Union member states today, the Good Samaritan of Jesus’ famous parable would risk being arrested as a criminal for offering humanitarian aid and perhaps be imprisoned for human trafficking.

The first Schuman Lecture held in the Upper Room in Amsterdam last Friday evening, entitled Migration after Marrakesh, focussed on migration issues following the UN inter-governmental conference in Morrocco, last December, which produced the Global Compact for Safe, Orderly and Regular Migration (GCM). Dr Noemi Mena Montes, a Spanish radio journalist and award-winning researcher on migration studies, delivered an updated version of the illustrated address she gave at the State of Europe Forum in Malta in 2017. (The 166-page Forum report is now available here).

As if on cue, the Dutch digital news journal, De Correspondent, ran a story on the same day headlined: In Europe people who help migrants are no longer heroes but criminals.For a long time, reported the news website, EU member states let aid organisations and volunteers do the work they didn’t want to do themselves: saving migrants and offering them shelter. But now those helping migrants run the risk of criminal charges.

In Belgium, the chief editor of a women’s beauty magazine was rudely awakened by armed police storming into her apartment at 5 a.m., body-searching her in her pyjamas and ransacking her house in search of computers, USB-sticks, notebooks and mobile phones. This began a year-long legal process, accused of belonging to a citizens platform offering overnight shelter for migrants huddling in a Brussels park, not far from the EU institutions. Charged with human trafficking, the editor was relieved to be acquitted in court late last year, only later to learn that the prosecutor had appealled to a higher court.

Yet according to a recently-posted study commissioned by a European Parliament committee, ‘policing humanitarianism’, including the wider dynamics of suspicion, intimidation, harassment and disciplining, undermines EU citizens’ rights–such as the freedom of assembly, freedom of speech and freedom of conscience.

‘When civil society is effectively (self-)silenced and its accountability role undermined,’ says the report, ‘policies to combat migrant smuggling may be overused and give rise to serious breaches of the EU’s founding values, notably the rule of law, democracy and fundamental rights. Moreover, policing humanitarianism negatively affects wider societal trust and diverts the limited resources of law enforcement from investigating more serious crimes.‘

De Correspondent noted a ‘scary evolution’ of official actions against aid volunteers, with twenty reported cases in 2017 escalating to at least 89 they tracked last year. The story cited examples from France and Greece of those criminally charged for saving lives at sea; in Norway, Denmark, Sweden, Switzerland and Great Britain where drivers who offered migrants a lift were dragged before the judge; again in Italy, aid workers giving food and showers to migrants were arrested.

Off the coast of the Greek island of Lesbos, Danish and Spanish volunteers watched for overloaded rubber boats coming from Turkey after receiving an emergency signal. They called in the coast guard for help, and when the naval ship came alongside, they found themselves being escorted to the coast and arrested for human trafficking. After two years of waiting for their trial, unable to leave the island, they were finally acquitted.

Some authorities justify their policy by saying that aid organisations are a pull factor, encouraging illegal immigration. But the UN High Commissioner for Refugees, Filippo Grandi, flatly disagrees. In his report, Desperate Journeys, he argues that the NGO’s deliver essential services.

Last month, the Sea-Watch 3, sailing under the Dutch flag, rescued 47 people between Libya and Italy, and lay for days off the coast of Sicily where several mayors prepared to welcome the refugees but were blocked by the populist Italian government. Finally after seven nations agreed to receive the migrants, the ship was allowed to dock in the port of Catania, where it has been impounded for ‘breaching safety and environmental laws’.

Hospitality, she argued, is the answer to terrorism–as practised by the Samaritan.

Cross over the Continent

Stars, in case you haven’t noticed, are really ‘in’ right now. Usually we talk of…

From nothing to… nothing?