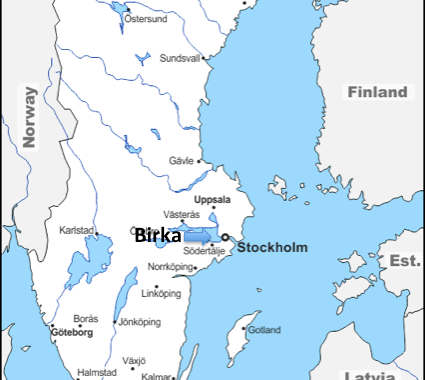 The Apostle of the North

We’re leaving Georgia where we were last week to go 3500 km towards the North, to Sweden. And our precise destination is the island of Björkö, which lies in the Lake Mälaren, 30 km West of Stockholmand 15 km North from the town of Södertälje.

On this island there is a hill overlooking the lake. On the top of it stands a cross named the cross of Anskar. And nearby are the excavations of what used to be a city called Birka.

To understand what happened here we need to go back to the 9thcentury. In Western Europe, Charlemagne had just created his Christian version of the Roman Empire, which resulted from the conversion of the Franks. The Nordic lands, however, were still pagan. The spiritual capital of the Vikings was Uppsala (today Gamla Uppsala – Old Uppsala), a city only 65 km North from Birka.

As is the case today, Swedish society already had an advanced form of democracy at the time. The negative side, however, was that human sacrifices were regularly offered to Odin, one of the main gods of the Vikings. There’s even a story of a king named Ane the Old, who lived to be 110 years old, ‘thanks’ to an agreement made with Odin that he would sacrifice one of his sons every ten years in exchange for a long life.

The first Vikings to become Christian were probably merchants who travelled regularly to Germany and the Netherlands – the lands of the Franks and the Frisians who were already converted. They, in turn, impacted their homeland so much that in 829 some Swedish ambassadors came to the Frankish court in Germany to ask for a missionary to come and teach them.

That’s when Anskarcame onto the scene. He was born in the town of Corbieor Corvey(near Amiens in France) and was a monk in the town’s Benedictine monastery. However he ended up near Bremen, in Northern Germany, due to a later transfer. Having the reputation of a godly man, Anskar was chosen to be that missionary.

After a perilous trip, Anskar reached Birka in 829. In a time when Stockholm didn’t exist yet, Birka was an important harbour (thanks to the easy connection between Lake Mälaren and the Baltic sea). Actually there were probably churches for the Frisian merchants who were living there even before Anskar arrived.

During his two-year term of fruitful work he saw a rising number of converts.  Among them was Herigar, a high court official, who built a chapel in Birka. This was possibly the first church building in Swedish history.

Anskar returned to Germany in 831. Later he was ordained Archbishop of Hamburg to overlook the missions in the Nordic lands. He then sent his nephew Gautbert to continue the work in Birka. However this didn’t work out well. Gautbert soon left and the dwindling church was now even left without a pastor.

The church of Birka reached its lowest at only three members. Among them was a lady named Frideburg. She used to keep a bottle of wine beside her bed to ensure that she could have communion herself in case there would be no priest to give her the sacrament.

Well Frideburg did not need to do that finally. Anskar who clearly hadn’t forgotten Birka sent another missionary there three years later. And in 848, seventeen years after his departure, Anskar returned to fulfil a second missionary term.

An interesting detail is that the pagan king of the Swedes consulted his gods to find out whether he should approve of Anskar’s mission. Thankfully, he received a favourable answer. This time the mission was more successful. Now the whole province of Uppland turned to faith in Christ. Later Anskar left again, this time for good, and finally passed away in Bremen on the 3rdof February 865.

Today there is neither church nor city on Björkö island, but only a cross and some excavations.

This story can remind us of Jesus’ parable of the mustard seed. Just like the mustard seed needed to be buried and die to become a tree, so the first church in Sweden nearly died out before the Gospel finally took root. Birka was the seed of the Church in the Nordic nations. For example later a bishop of Birka named Hiltinus probably became the first missionary to cross the Baltic sea and evangelize Finland.

The church and the city of Birka have disappeared but God’s kingdom has grown and shaped Nordic culture and society.

In this season of history when the church seems to be dying once again, this might just be the sign that the Kingdom will further advance in Sweden.

Denmark's birth certificate https://soundcloud.com/aeuropeanjourney/a-european-journey-18-jellingdenmark Today we are visiting the continental part of Denmark, that is…