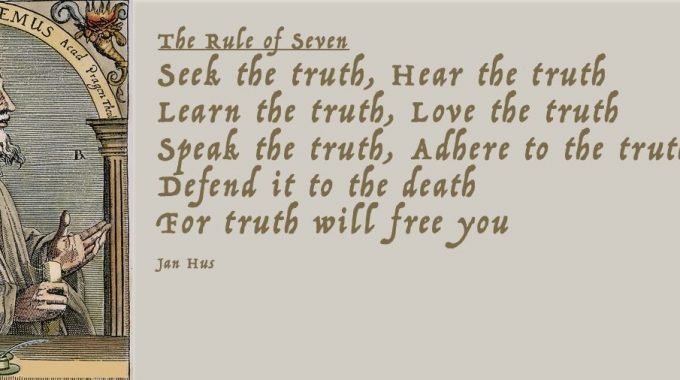 This month has marked the 29th anniversary of the fall of the Berlin Wall (November 9) and of the Velvet Revolution in Czechoslovakia (November 17), two events which catalysed the collapse of the communist system.

In 1989, headlines everywhere announced the unbelievable news that the Wall had fallen. Euphoric crowds celebrated in the streets. The pluralistic free society of the West had won! Marxist regimes in other central and eastern European satellite states toppled like dominoes, and eventually the Soviet Union itself fell apart.

Yet today, less than three decades later, headlines now tell us that it is truth that has fallen.

“In today’s world, truth is losing”, announced The Washington Post. The Oxford Dictionary chose ‘post-truth’ as the word for the year in 2016. Since that year, we have watched political leaders rise to power in both North and South America, and across Europe to Russia and Turkey, who brush aside truth as a petty inconvenience.

The words of the prophet Isaiah ring ominously true today:
Justice is turned back, and righteousness stands afar off; for truth is fallen in the street, and honesty cannot enter. So truth fails, and he who departs from evil (stands for truth) makes himself a prey. – Isaiah 59:14-15 New KJV

What has happened to turn this apparent triumph of secular liberalism into a climate of fear, uncertainty, polarisation, fake news and mistrust?

In 1991, Lesslie Newbigin warned of the multiple problems of pluralism. While others contrasted free society pluralism  with totalitarianism as light with darkness, he wrote: “Total pluralism, in which there are no criteria by which different lifestyles could be evaluated, in which any kind of discrimination between cultural norms as better or worse is forbidden, in which there is no truth but only ‘what seems meaningful for me’, leads inevitably to anomie, to lostness, to a meaningless life in a meaningless world” (Newbigin, L. (1991) Truth to tell,Geneva: WCC Publications, p55).

Marxism, claiming to be objectively scientifically true, therefore claimed the right to impose itself as public doctrine controlling all areas of life, he argued. We have seen the disastrous consequences of a false objectivity and applauded its collapse. Yet, even as the crowds were still celebrating victory in the Cold War, he cautioned of the ‘danger of collapsing into a false subjectivism in which there are no criteria but everything goes’.

Today, truth has fallen to subjectivism. Honesty is shut out. Those who stand for truth are mocked and dismissed. So how do we respond?

On the recent anniversary of the Velvet Revolution, I was in Prague with 170 participants of the Together for Europe movement from many nations of Europe east and west, and shared a meditation on lessons from Czech heroes about living in a ‘post-truth’ world.

Jan Hus, burnt at the stake as a heretic in 1415 during the Council of Constance, is honoured in Prague’s Old Town Square by an impressive monument paid for by publical donation during the First World War, to mark the 500th anniversary of his death. A century before Luther, Hus stood up for truth against abuses and doctrinal distortions in the Church of the day. Even as he faced his own death in Constance, he exhorted his disciples back in Prague to ‘seek the truth, hear the truth, learn the truth, love the truth, speak the truth, adhere to the truth, defend it to the death, for truth will free you’.

Havel is another Czech hero from whom we can learn about living in a post-truth world. In what used to be a famous essay, The Power of the Powerless, the dissident playwright exhorted his fellow countrymen living under the false scientific objectivity of marxism: ‘don’t live the lie!’In language becoming freshly relevant this time in the West, Havel hammered again and again that truth and love had to prevail over lies and hatred.

Havel was a founding member of the Charter 77 movement whose motto was: Truth prevails for those who live in truth. Imprisoned multiple times for his stand on truth, Havel found himself in 1989 thrust into leadership of the Velvet Revolution and almost carried up the hill into the presidential palace to be the nation’s new leader.