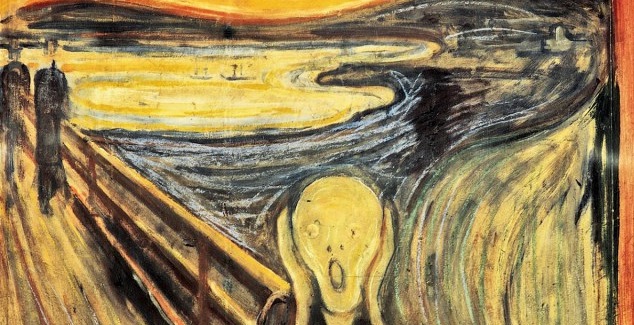 Edvard Munch’s iconic image, The Scream, painted in four different versions from 1893 to 1910, took on deeper meaning for me this week. A very close friend, Albert Hoekstra, was drowned in Sri Lanka while swimming in the sea after a teaching seminar. We buried him on Wednesday.

At the funeral, Albert’s pastor, Richard Vervoorn, projected Munch’s painting on the church wall. We could all identify with the emotion in the painting which we too had felt the moment we heard the news. Shock. Denial. Unbelief. Grief. Loss. A scream was the appropriate response.

Albert had so many plans. He had just turned 60 and had so much still to live and give. He was about to start his doctorate. He had tickets booked for speaking in South Africa and other countries. We spent a day sailing together last month off the coast of Norway. How could he be suddenly just gone? I still half expect him to walk through the door.

How ironic, as his daughter remarked to me, that she could be so involved in her thoughts with refugees drowning in the Mediterranean, and then her own father drowns! It comes so close to home.

We hear and feel the scream when a loved one drowns or dies some other way. But what about the screams of those drowned trying to cross the Mediterranean? Or of the 8 million displaced Syrians trapped in their own land between the regime, the rebels and religious extremists? Or of the 4 million homeless Syrians in makeshift camps in Turkey, Jordan and Lebanon? Or of the 250,000 ‘lucky’ Syrians who made it to Europe, only to clubbed by Macedonian border guards or fire-hosed on the Hungarian border…

Many might ask, where is God in a world screaming for justice, for basic necessities of life, for a new beginning, for peace, for shelter, for human rights to be respected? Pastor Richard asked this question at the funeral in relation to Albert’s death. There is much we don’t understand; why God allows some things to happen. We live in a fallen world, a world which is not how God intended it to be. Bad things happen. But that is not the final word.

Creation itself, we are told, is groaning, waiting to be liberated from its fallenness. The books will one day be balanced. And God does hear the cries and screams. He heard the cries of the Israelites in slavery in Egypt. He is not a God who remains untouched by suffering. He came and suffered among us, becoming ‘a man of sorrows, acquainted with grief…’.

God’s answer to the cries of the Israelites was to send a human agent. That is still his primary response. This is our hour, Europe. But, like Moses, we look for excuses. Won’t this mean losing our Christian heritage? (or what’s left of it). Won’t Europe be overrun by Muslims if we open the doors? Won’t the crime rate soar if we allow all these refugees in with their different cultures?

Please take six minutes to watch this UNHCR video. It’s the best explanation I have come across of the current situation and addresses the fears many are expressing on social media. We are writing history right now, the script asks. How do we want to be remembered? As xenophobic, rich cowards behind high fences?

One reader, counting himself as a ‘serious Christian’, responded to one of my posts saying he was fed up with these ‘irresponsible, emotional and cheap arguments’ to welcome the refugees. He proposed that governments should act like ‘a preventive Good Samaritan’ – i.e. ‘make sure their own citizens, for which they are mainly responsible for first and for all, don’t run uncontrollable risks to get beaten up’. Yes, governments do have a responsibility for protecting their own citizens. But to read that into the story of the Good Samaritan is totally to miss the point Jesus was making: of not just looking after your own but caring for anyone in need.

“Jesus said ‘love your enemies’ but he never ever intended to say that we should love people who (want to) rape and kill,” wrote my interlocutor. “That is not the enemy, that is a ruthless killer or rapist.” If that’s your view of these refugees, check out this BBC interview of Noujain Mustaffa, a 16-year-old disabled Syrian teenager trying to get through Croatia to her brother in Germany. Joni Tada Eareckson, champion for the disabled, sent this link she found after wondering how the disabled and elderly Syrian and Iraqi refugees were coping.  She asks us to share it with our friends and ask them to pray for thousands of people disabilities like her who are displaced from their homes.

The sudden influx of refugees has caught us all off guard. It has put us all on trial. We need to realise how well off we are in Europe compared to Middle Eastern and African nations, and to understand that to whom much has been given, much is required. I heard a Dutch government official quoted on the radio that The Netherlands had almost reached its capacity to receive refugees. Then why do we expect Greece, of all countries, to carry a much greater load? or Jordan or Lebanon? Would he dare repeat such nonsense after watching this video?

These sort of attitudes make me want to scream!

And He shall reign for ever!

George Frederick Handel could never have dreamed that his ‘Messiah’ would become a worldwide phenomenon,…

The Virgin and the Divorcee

Europe, the nursery of world Christianity, has itself become a most challenging and strategic mission…