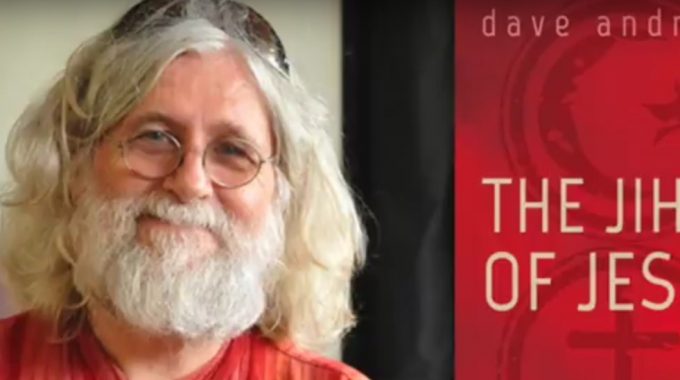 Called The Jihad of Jesus, it’s a handbook for reconciliation and action, a do-it-yourself guide for all Christians and Muslims who want to move beyond the ‘clash of civilizations’ and struggle for justice and peace nonviolently side by side.

I’ve known the author, Dave Andrews, for four decades, during which he has been consistently provocative and radical in his application of Jesus’ teaching to daily life and contemporary society.
Dave doesn’t pretend to be an expert: ‘I have not written this book as a specialist. I am not. I have simply written this book in conversation with Muslim friends, seeking to find a way we can struggle for love and justice that is true to the best in our faith traditions.’
Frequent misleading references to ‘jihad’ in newspaper, radio and tv headlines prompted some of Dave’s friends, both Christian and Muslim, to suggest he write a book about Jesus and ‘jihad’ and call it ‘The Jihad of Jesus’.
They hoped the provocative title would get a lot of attention, and introduce Christians and Muslims to a Koranic reconstruction of the concept of ‘jihad’ in the light of the radical practical nonviolence of Jesus.
Presently in Europe to promote his book, the Brisbane-based Australian has had prominent attention from the major papers in his home country with front page and full-page stories. Also the influential American Huffington Post review urged ‘all Christians and Muslims to join the Jihad Of Jesus’.
Oxymoron
For most of us, the book’s title seems an oxymoron. That word ‘jihad’ clashes with the Jesus we know. And Dave admits that the word conjures up images of terror and atrocities–from 9/11 to the recent aborted Thalys would-be massacre.
But if you go back to the Koran, he explains, the word jihad actually means struggle, not war. The word for war in the Koran is qital. The overwhelming emphasis of the word jihad in the Koran is non-violence.
Which means that what most ‘jihadists’ are involved with is totally unacceptable in Koranic terms, Dave argues.
‘So rather than taking the anti-jihad stand–which won’t succeed because jihad is such an important view in the Koran–we’re saying let’s reclaim it from the extremists, reframe it as a sacred nonviolent struggle for justice,’ proposes the author.
‘If both Christians and Muslims believe Jesus is the Mesih or the Messiah–which they do–let’s look at Jesus as a role model for non-violent jihad. Rather than see Jesus as a poster boy to legitimate crusading against Muslims, we see Jesus as a Messiah who can bring Muslims and Christians together, to work together non-violently.’
But achieving common ground it is not as simple as condemning violence, concedes Dave. Rather, it involves a critical reflection of the way religions have been constructed.
He argues in The Jihad Of Jesus that we are caught up in a cycle of so-called ‘holy wars’, but while this inter-communal conflict may be endemic, it’s not inevitable. And this gets to the core of the book’s argument: our religions can be either sources of escalating conflict, or resources for overcoming inter-communal conflict. For that to happen, we need to understand the heart of all true religion as open-hearted compassionate spirituality.
Open-set
When we define religion as a closed set–where you’ve got people who are in the right, and people who are in the wrong–we tend towards the violence of religion, believes Dave.
People who believe they are right feel they have the responsibility to impose their views on others non-violently, or if necessary, violently, he reasons. We all know examples of Christians and Muslims who operate like that.
However, an open-set mindset exists within both traditions which recognises that it has no monopoly on God, or a franchise on the truth. It includes the other in a way that is empathic and respectful. It leads to non-violent resolution of conflicts instead of violence.
‘There’s a thousand years of conflict between our communities,’ explains Dave. ‘So you’ve got this strong paranoia and this great underlying fear of one another that has erupted again since 9/11 in explicit and graphic and catastrophic ways. That is the challenge.’
Dave acknowledges theological differences between Christians and Muslims, but intentionally tries to focus on those beliefs about Jesus that Christians and Muslims have in common as the place to start conversations.
Such ‘common ground’ is not suspect compromise, but is ‘sacred ground’ on which we can stand and speak to one another, Dave believes. He urges Christians and Muslims to reflect the kindness and humility of Christ, who they should follow ‘with every beat of their hearts, through every vein in their head, their hands and their feet.’
For further information, see jihadofjesus.com, or order the book here.
Till next week,
Jeff Fountain

A spirit of death hangs over our neighbourhood in Holland this easter. Flags fly at…

Our lives, plans and dreams have been interrupted in just a few days – personally,…