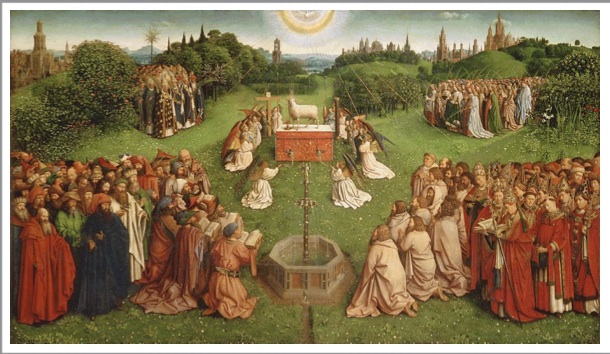 How can we unstop the wells of the Christian heritage of Europe which have been clogged up with neglect, indifference, lies, half-truths, forgetfulness, rebellion and unfaithful witness?

We need to start with ourselves. We need to learn to look around us and begin to see with new eyes. What has God done here in our locality in the past? What witness, deposit of truth, signpost, remains from that time? What can we learn from that period that relates to our situation today? How can we create communication bridges from the past to the present, from historical figures to our contemporaries?

As the ‘continent’ which nurtured Christianity and spread it worldwide, Europe is one great open-air museum with countless monuments to Christian truths, in a huge variety of expressions. Yet we need to learn to open our eyes to see such signposts.
And we need creative and inspired imagination to find ways to help open the eyes of our fellow Europeans to the relevance of that truth for today.
Today we start the Masterclass in European Studies, this year on the outskirts of Brussels in a suburb called Sint-Peters-Leeuw, with over twenty participants from eleven nations.
Each day we plan to start with a meditation on some person, artistic creation or institution in Brussels and Belgium, looking for signposts to  Christian truth deposited over the centuries in that land.
Missing the point
Just twenty minutes’ drive from Sint-Peters-Leeuw is the Brussels suburb of Anderlecht. There we will visit this afternoon the 16th century Erasmus House, where a number of rare and ancient editions of Erasmus’s writings are preserved, among the collection of Renaissance furniture, works of art, engravings, books and archives. Erasmus convalesced in this house for a season recovering from a physical breakdown.
But Erasmus was a humanist and poked fun at the church, didn’t he? That is indeed the popular image of the
famous scholar who has been made into an icon of tolerance and undogmatic thinking. All of which really misses the point of his life and passion. Which was to urge his fellow Europeans to return to the wellsprings of our their culture and society: AD FONTES!
In order to point the way to those wellsprings, he retranslated the New Testament from Greek manuscripts into Latin, vastly improving the official but errant Vulgate version over 1000 years old. This 1516 publication was to catalyse the Reformation as Martin Luther quickly grasped the profound implications of this better translation. To reveal more of Erasmus’ passion and motivation, we will mediate on his exposition of the Lord’s Prayer.
Tomorrow, we travel to the northern outskirts of Brussels, to Vilvoorde, where the man called the ‘father of the English language’ was strangled and burnt as a heretic in 1536: William Tyndale.
Some 80 per cent of the King James Bible was originally penned by Tyndale, whose last words were: ‘Lord, open the king of England’s eyes’. Within a year of his prayer being spoken, the king had ordered a Bible to be placed in every church in his realm.
Our meditation to begin the day will focus on his book, The Obedience of a Christian man, through which the king’s eyes were later opened.
Stunning detail
A little further away–in Ghent–we find one of the most significant works of art in Europe, the Ghent Altarpiece completed by Jan van Eyk in 1432 (see photo). We won’t be able to visit it outselves, but we will meditate on this magnificent multi-paneled altarpiece with its stunning detail and precision portraying the scenario of Revelation chapter 5. While clearly in the idiom of Catholic ritual and theology, the painting expresses clear Biblical truth to the sincere onlooker.
On Thursday, prior to our visit to the European Parliament, we will meditate on the EU motto: United in diversity. Which worldview can sustain this aspiration: monism, dualism or trinitatrianism?
Friday, our last day, will begin with reflecting on Belgium’s many cathedrals. Dominating the centre of the nation’s cities are the huge monuments to a worldview declaring the majesty of God and the sovereignty of Christ in whom all things hold together. Many of us as protestants and evangelicals perhaps see them only as symbols of power, wealth, pomp and ceremony cloaking the simplicity of the gospel. Yet Europe’s cathedrals remain among the greatest attractions to millions of tourists. May God show us ways to open people’s eyes to the truths which were the wellsprings of Europe’s culture.
Till next month,
Jeff Fountain

Lost for many against the ‘horror’ background of halloween, global pandemic, American elections and a…