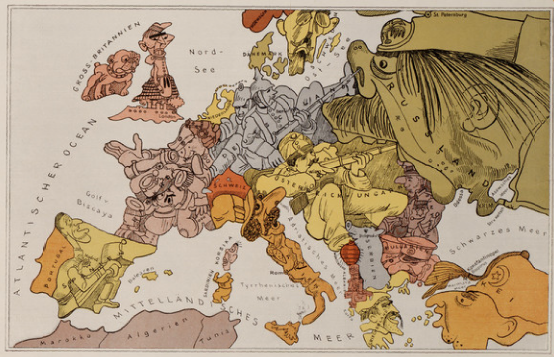 Over Pentecost weekend, I was invited to speak at a seminar during the Opwekking Conference on the topic, ‘Europe: battlefield or mission field?’

To my surprise, the seminar tent was full. For, as I told my audience, ‘Europe’ traditionally has been a blind spot for Protestants and Evangelicals. If we have ideas about Europe, they are usually negative–vague opinions about the Beast, the revived Holy Roman Empire,…  that sort of thing.
Catholics on the other hand tend to think much more positively about Europe. These days I often quote Catholic historian Christopher Dawson, who wrote: Catholics see woods; Protestants see trees. And I add: Evangelicals see branches.
For before the Reformation, the Catholic Church dominated western Europe. Catholics knew they belonged to something much bigger than their own country, principality or even empire. The Church’s leadership looked beyond their own national boundaries, and of course to Rome.
God, King & Country
The Reformation resulted in many territorial churches, landeskirchen, being established in Protestant countries: the Church of England, the Dutch Reformed Church, Lutheran churches with national synods and national identities. Protestants began to identify their churches with their nations; fierce loyalities to ‘God, king and country’ defined the Protestant identity, as still expressed in Northern Ireland for example.
Over the centuries, non-conformists split away from the national churches to start free, independent and mostly evangelical churches. Now the focus narrowed further to the local church.
Hence ‘Protestants see trees; Evangelicals branches’. ‘Europe’ therefore was well beyond the consciousness of most protestants and evangelicals.
The rise of pre-millennialist teaching, popularised through J.N.Darby and the Scofield Bible a century or more ago, deepened the evangelical suspicion of a ‘doomed Europe’. For English-speakers, the British Empire (later Commonwealth) and the special affinity with the USA took precedence over continental Europe.
Today, many Christians remain sympathetic to nationalistic rhetoric, blaming ‘Europe’ for many of the problems we face today, and arguing that we need to safeguard the ‘Christian’ nature of our nations. A Christian friend who started a political party recently wants The Netherlands to withdraw from the EU, the UN and NATO, and to isolate itself from foreign influences.
He means well, but in my understanding this thinking is misguided, irresponsible and not really very Christian. For, as I told my audience at Opwekking, without Europe, The Netherlands is nothing.
None of us developed our identity in isolation. Our relationships with parents, siblings, extended family, friends and schoolmates shaped our identity–for better or for worse. Healthy relationships with others shapes healthy identities. The Netherlands belongs to the European family of nations whose identity was profoundly shaped by the coming of the gospel. Christianity, the Renaissance and the Reformation all came from outside The Netherlands and helped shape the nation’s identity. Holland’s Golden Century was built on trade with other nations.
Neighbours
As followers of Jesus, we need a vision for Europe based on the Great Commandment to ‘love God and neighbour‘. Applied to international relations, this means we must learn to build healthy relations with neighbours, not isolation.
This is why I encourage anyone serious about Europe to consider the Masterclass in European Studies we offer in Brussels this summer (Aug 3-7). It is one of the few study opportunities I know where Europe is looked at in the light of this commandment. It is a truly rare opportunity to gain rich insight into the transforming influence of the gospel in the story of Europe.
We also reflect on the secularisation of European society as well as the role of the European Union in safeguarding the 70 years of peace we have enjoyed since 1945, an  abnormality in European history. For despite centuries of Christianity, the norm for Europe has been war.
In ten days time, the 200th anniversary of the Battle of Waterloo and its consequences for Europe will be commemorated. Romkje and I have been invited by the YMCA Munich to be in Waterloo this coming weekend with representatives from Germany, France, England and Belgium. So next week I’ll pick up the theme of ‘battlefield or mission field?’ again.
Till then,