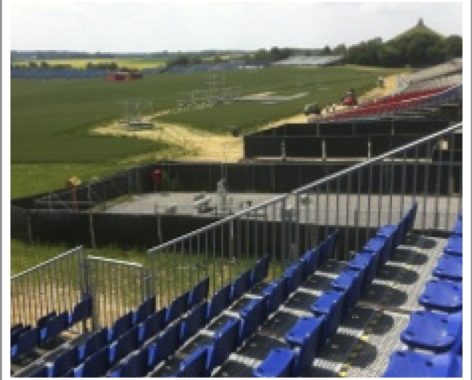 Tribunals are being constructed on the battle field of Waterloo to seat the hundreds of thousands coming this week to watch the re-enactment of the battle  which shaped 19th century Europe 200 years ago this Thursday.

I climbed to the top of one tribunal on Saturday to take the accompanying photo. The Dutch-built Butte du Lion monument, a conical hill, can be seen on the right, marking the spot where the Dutch Prince of Orange, Willem II, was knocked from his horse by a musket ball during the battle.
Right behind this tribunal is the Fichermont Convent built last century on the edge of the battle field as a sanctuary of prayer for peace by Dominican sisters. (For those old enough to remember, the global song hit of 1963 by the Singing Nun, Dominique, came from this convent.)
Now the home of Le Verbe de Vie Catholic community, Fichermont was the venue for a day of prayer, reconciliation and forgiveness on Saturday, involving French, German, British, Belgian and Dutch participants. Among the various speakers were old YWAM-friend, Monsignor Peter Hocken, and former president of the European Council, Herman van Rompuy.
Embarrassment
In contrast to the popular British perception of a great Anglo-triumph, the Battle of Waterloo has been described as ‘the first NATO operation’ and a ‘European’ victory. Just over one third of the Allied forces were British; a majority were German speaking, and one fifth Dutch and Belgian.
A century ago, commemoration of the battle caused much embarrassment for British, French and German politicians as in 1915 Britain was then allied with former enemy France in trench warfare–again on Belgian soil–against former ally Germany. No great tribunes were erected on that occasion!
All of which reminds us that war has been the norm for Europe throughout the centuries as kings and emperors, nations and empires, settled disputes through force and violence.
Waterloo could easily have been a victory for Napoleon. The outcome depended on several key factors. The Allied commander, the Duke of Wellington, admitted freely that it had been ‘a near run thing’. In which case, French could have remained the world’s lingua franca, the dominant language of international communication, as it had been in much of Europe since Charlemagne’s time.
Instead, Waterloo is recognised as, in Churchill’s phrase, ‘a punctuation mark in history’. French novelist Victor Hugo called it ‘the tomb of France’.
The Congress of Vienna shaped post-Waterloo Europe. Already underway since the previous September following ‘Boney’s’ earlier defeat and surrender in May 1814, the congress was an attempt to restore the international system, to reset the boundaries and create a new balance of powers. The aim was not restoration of old boundaries but to adjust the size of the main powers so they could balance each other off and remain at peace. The leaders were conservatives, not republicans or revolutionists. After Napoleon escaped from exile and resumed his military campaign, the other negotiating nations moved to stop him at Waterloo.
Spoiled
The congress was the first in history where, on a continental scale, national representatives met to formulate treaties, instead of relaying messages between the various capitals. It shaped the framework for European international politics until the outbreak of war in 1914.
Today we have a spoiled and privileged generation for whom war is unthinkable, said Van Rompuy, warning that we should not take anything for granted. For many in this post-modern word, history started at one’s birth, he said. But history was the teacher of life. We had to learn her lessons.
I encourage anyone serious about Europe to consider the Masterclass in European Studies we offer in Brussels this summer (Aug 3-7). It is one of the few study opportunities I know where Europe is looked at in the light of history and the Bible. It is a truly rare opportunity to gain rich insight into the transforming influence of the gospel in the story of Europe.
Lectures, reading, discussions and fields trips in and around Brussels will help us reflect on the paradox of Europe as both battlefield and mission field, the continent most shaped by the Bible… and by its rejection.
See you in Brussels?
Till next week,
Jeff Fountain

The Pope, the Rabbi and the Atheists

The Pope, a rabbi and two atheists walked into a bar. The barkeeper said, ‘Is…