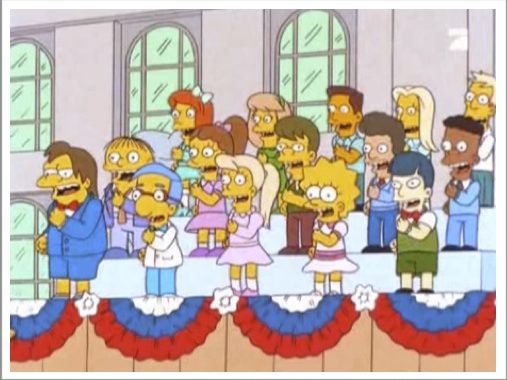 European children are dwindling. Everybody knows however that without children there is no future: even the makers of The Simpsons children’s choir clip. What is obvious is that this demographic factor is going to have major consequences for Europe, economically, socially and politically.

Yet few politicians seem prepared to address this issue. It’s just not politically correct to encourage couples to have bigger families; or to raise questions about the long-term demographic consequences of legalising same-sex marriages; or to suggest that what Europe needs to offset our low fertility rates is more migrants, not less.
Eurostat figures released a few days ago show that the trend towards fewer children will take a long time to reverse, and can come become irreversible.
Two decades ago, children under 15 years made up 18.6% of the population; today that has dropped to  15.6%. German children, in the eurozone’s economic driver, account for a mere 13.1%, and is continuing to become fewer.
Irish children under 15, in comparison, account for 22% of the population. Even there the numbers are falling. For Ireland’s fertility rate has dropped a third in threee decades–from 2.96 in 1980 to 1.99 in 2012. It has been below the replacement level of 2.1 since 1991.
Rapid aging
Referred to as the Total Period Fertility Rate (TPFR), the fertility figure represents a theoretical average number of children who would be born alive to a woman during her lifetime.
A 2012 report revealed France to have the highest fertility rate at 2.01, with Ireland at 1.99 followed by the UK with a rate of 1.94. Portugal had the lowest rate at 1.28.
This past week I have been in the Faroe Islands, in the north Atlantic between Scotland and Iceland, where the official fertility rate is 2.2. Nowhere else in Europe is the TPFR above the replacement level.
None of this is new revelation. The rapid aging of the eurozone’s population–severely in Germany–is well-known. But these fresh figures about children force us to sit up and take notice. For, as everybody knows, children are tomorrow’s workers. And with people living longer, there will be fewer future workers to support more pensioners.
Economists, who unlike politicians don’t have to face re-election, are beginning to voice concerns that higher levels of immigration are unavoidable to prevent very low economic growth and accompanying high levels of debt in the decades to come.
European Central Bank President Mario Draghi tried to put on a brave face as he described brighter prospects for the eurozone during his news conference last Wednesday. However, two Irish researchers, McQuinn and Whelan, last month predicted that decline in the work force due to fewer younger workers will mean an annual eurozone economic growth of just 0.6% over the coming decade. Barring significant reform and increase of births and immigration, the economic growth would be just 0.3% between 2044 and 2060.
Decadence
Again, none of this is new. We are just stating the obvious. Yet we seem to go on with life as if the future will be just more of the same.
This is not only a European malaise. It is a western problem, although Europe is leading the way. Over two years ago, New York Times columnist Ross Douthat wrote that society’s retreat from child rearing was a symptom of late-modern exhaustion. A spirit that privileges the present over the future, he wrote, was a condition of decadence.
If we are concerned about God’s purposes for the future of Europe and our countries, then these are issues we should be praying and talking about. That’s what we plan to do in Riga at the State of Europe Forum, May 8 & 9, along with many other pressing issues, with Christian economists, politicians, academics, theologians and activists.
You still could join us there.

A plea from Ukraine

Overshadowed by the refugee crisis since the summer, Ukraine was back in the headlines last…