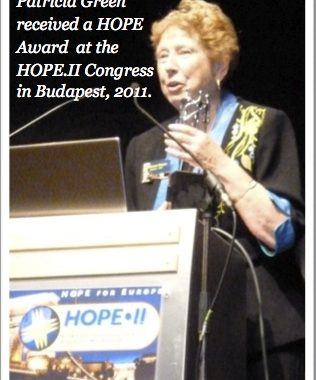 The street girls called her the angel of Berlin. But now they’ll miss Patricia Green walking the shady streets where the girls ply their trade, with her smile and a basket of give-aways. Last week, she lost her battle against cancer and passed away in her home country of New Zealand, where tomorrow a memorial service will be held.
On May 28, well-wishers of her Alabaster Jar ministry will attend a commemoration service in Berlin, to honour the 76-year old pioneer of ministry to victims of prostitution and human trafficking.
Among those no doubt attending will be some of the girls whose lives she has helped transform. Like Linda,  who told Patricia she was not used to women like her. ‘Most women look at us like dirt, ‘she said. ‘It’s nice that you say hello and bring us things. We’ve never had that here even though (prostitution) been legal since years.’
Or Sandra who always missed Patricia when she was away and will now miss her badly. Or Maxine who always gave her a hug when they met, leaving her spot on the street to come and talk. Or Barbara who simply ignored her phone if it rang when she was talking with Patricia.
An ordained Assemblies of God minister with a Master’s degree in Community Psychology, Patricia began Alabaster Jar in 2006 in Berlin, twenty years after starting a similar ministry, Rahab International, in Thailand. There she had felt powerless after seeing women and young girls being sold as sex slaves as that trade began to boom in Asia.
With a local Thai woman, she began to frequent  bars where the girls earned their keep by pole dancing, serving drinks and sleeping with foreign men. They began simply talking to the women about how to spread awareness warning about sex tourism. Rahab now operates a hairdressing salon where women can go for free and forget for a while what happens in the outside world.
False expectation
Axel Nehlsen, of Gemeinsam für Berlin, explains that there are some 400,000 prostitutes working in Germany, many from Thailand or Eastern or Southeastern Europe. In Berlin, up to 10,000 female prostitutes work on the streets or in brothels, bars, sex movie theatres and massage salons. Prostitution was legalised in 2002, in the false expectation that it would result in better conditions and more autonomy for sex workers. Yet exploitation and human trafficking remain significant problems. The new law failed to provide for a ‘legally imposed improvement’ in the situation of these women, or to offer assistance for women wanting to get out of the ‘trade’.
Women from Alabaster Jar visit with prostitutes in Berlin’s Oranienburger Strasse (Mitte) and in the drug and prostitution zone of the Kurfuerstenstrasse (Tiergarten/Schoeneberg). The girls working on ‘O’strasse are all German, very professional and average only 21 years of age.
‘K’strasse is very different, the Alabaster workers report, many women coming from Bulgaria, Czech Republic, Poland and even Hungary to earn money to feed and educate their kids, as there is little work available in their countries. Some are trafficked.
Hunger
Patricia and her co-workers experienced a gradual acceptance over time from the women, some because they were hungry and had no money for food. Alabaster Jar offers hot tea, soup and biscuits to women every Wednesday afternoon and evening from a caravan, a drop-in centre to warm up and have a chat. Here they can receive information on healthcare and support networks. Patricia’s volunteers learn about their needs and their wants.
Some are spiritually hungry, even love God and ask for Bibles and for prayer. Many little ‘prayer circles’ form on ‘K’strasse, as Alabaster workers and street workers alike put their arms around each other and pray for their needs. Conversations with some 50 women each week were now deeper, Patricia wrote in her last annual report, with the girls sharing more about their lives, dealings with clients, police, families, kids and their desire to leave the ‘trade’.
Co-worker Kate Snowden posted on Facebook: Saying ‘Patricia changed my life’ sounds like such a cliche, but she really did. I am remembering her with so much gratitude for her mentoring, prayers and friendship and for her lifetime of work to free women from the sex trade.
Till next week,
Jeff Fountain

Last week I went to hell and back. Well, close enough to get a glimpse.…

The Dutch version of a book written by Pulitzer Prizewinner Anne Applebaum arrived this week,…