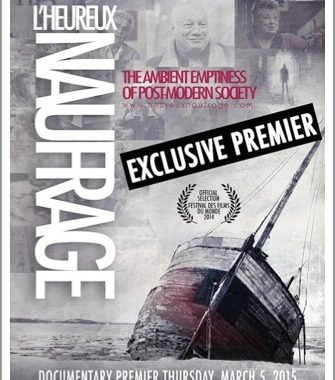 A documentary exploring the ‘ambient emptiness of post-modern society’, rated in the top ten films of the Montreal Film Festival, will be premiered next week in Brussels and Paris.

Three young film-makers from Quebec set out to incite a society-wide conversation about the foundations of social values. The result is L’Heureux Naufrage (The fortunate shipwreck), a 52-minute montage of reflections from philosophers, artists, writers, film-makers, singers and public figures in the French world on both sides of the Atlantic, interspersed with archival images and contemporary illustration. The documentary articulates existential questions often unspoken in public debates, or discussions with family or friends.
Aimed at an audience who, liberated from the ‘heavy barge of institutional religion’ (hence the title ‘The fortunate shipwreck’), are beginning to realise something essential had been lost when religion was thrown out, it has already had been screened twice across Canada on national television.
After a showing at an annual conference of Quebec teachers, a Ministry of Education official requested the creation of a high school course with 15 weekly themes raised by the film. A cardinal attending a viewing of the film at  a gathering of bishops from Quebec Province took 20 copies to distribute to other cardinals in Rome.
Meaning
Noemie Jean-Bourgeault, one of the film-makers, introduced herself to me when I addressed an urban missions conference in Montreal in 2012. I had no idea of the scope of the project that she, her sister Xavie and brother-in law Guillaume, were working on until I viewed the preview.
As I watched, I realised what an excellent model for addressing the wistful emptiness of our secularised society this young team had produced. Among the poignant remarks I heard were the following:
• We are probably in the only era when a boy asks his father, ‘what is the meaning of life?’, and the father remains silent.–Eric-Emmanuel Schmitt, writer.
• The problem with Christianity today is that it has become invisible. It is there without ever saying its name. This means you have a lot of people today who say, ‘I am completely atheist, I am totally anti-Christian, but I respect the equality of all human beings, human rights, free thinking, etc. They are not conscious that these values would probably not exists in our societies if there was not the message of the gospels which is the source.–Frederic Lenoir, French writer, philosopher and religion specialist.
•  I lost my faith when I was about seventeen or eighteen. I became an atheist… But then, what happened? I had children. And to raise them I had to transmit a minimum of values to them… I learned the values I desired to transmit to them were essentially those I had received myself. Values such as love, justice, gentleness, sincerity, simplicity,etc. (But) no one can invent a value. The values you transmit to your children go beyond your own personal convictions.–André Comte-Sponville, French atheistic philosopher.
• The words of Jesus are inescapable. They are, in my opinion, the greatest words ever spoken concerning the meaning of life. I gave up religion, but Jesus’ voice continues to echo back to me. –Denys Archand, filmmaker.
• The values that we all believe in: equality, liberty, progress, etc… if we cut these from their roots, if we forget where they come from, how they developed over the course of the centuries, they’ll become like flowers that we cut off and put in a vase. After three days they become wilted. The same thing will happen to these values.–Jean-Claude Guillebaud, French journalist, writer, war correspondent for Le Monde, co-founder of Reporters sans Frontières.
Premier
Next week Noemie will be in Brussels (Thursday, March 5) and Paris (Friday March 6), to present the documentary at European premiers for Belgian and French audiences. Tickets are for sale at the door or online. DVD’s are also available online.
Here’s a great tool we can use for starting conversations about the source of our social values.

Thursday this week, October 9, marks the 25th anniversary of a remarkable event that took…

A miracle is unfolding in Amsterdam's infamous Red Light district, following the prayers and actions…