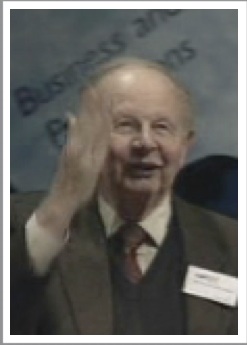 Sir Fred Catherwood was a unique figure in the British and European evangelical world. Vice-president of the European Parliament as communism was collapsing from 1989 to 1992, and later president of the Evangelical Alliance in the UK, he dared to suggest that only a return to Christian faith could hold the European Union together.
When Sir Fred passed away almost two months ago aged 89, tributes to his career in business, politics and church appeared in Britain’s major papers. The Guardian called him ‘the sort of pro-European Conservative whose views are almost extinct in the current party’, noting his open opposition to the economic price of Thatcherism.
Sir Fred mentored my thinking about Christian engagement in shaping the EU, firstly through his book, Pro-Europe? (IVP 1991), and through his address to a symposium of evangelical leaders from across Europe I convened in Brussels in 1992. He and Lady Elizabeth were also house parents at the first New Europe Student Forum held in the mid-’90’s. At Hope.21 in 2002, he was one of the first Hope Award recipients for his significant contribution to Christian engagement in public life.
At the 1992 Brussels symposium, he shared–without notes–a panoramic oversight of European history, making it clear why Christians had a responsibility to shape Europe’s future (see Deeply Rooted, pp86ff). We had swept our European house clean of fascism and of communism, he said, and now had democracy and freedom of speech from the Atlantic to the Urals. But we also now had a Europe emptier than before of the Christian faith, he warned. In the words of Christ’s parable, Europe was a house swept clean, ready for seven devils worse than the first to enter.
Dignity
Europe’s unity had been made possible only by the common Christian view of life developed and applied progressively over 2000 years, he began. It had curbed the war-like paganism of the northern tribes, the greed and ambition of principalities and powers. Christian influence had been the overwhelming influence in our Europe, as evidenced in the wholly Christian inspiration of the European Convention of Human Rights. ‘Go through each item and you’ll find a Christian doctrine backing it up,’ he challenged all present. Whatever the many faults of the church and of individual Christians, the leaven of the Christian faith had worked through the lump of our society for 2000 years, he stressed.
We owed even our rational science to the Christian faith, he claimed. Four hundred years ago, Christians came humbly to the Book of God’s Works, creation, as they came to the Book of God’s Word, the Bible. They came with certain presuppositions without which you could not have had our present natural science: that there was one God, not a pantheon of gods. So there would be one natural law in the universe and not conflicting laws. The unity in natural law is one pillar of the scientific method.
Above all, we believed in a good, benign God, not a hostile God, who had given the universe to us for our benefit. We were therefore to work out these laws for ‘the relief of man’s estate’, as the founding father of science, Francis Bacon, had said. So natural science had arisen from Europe, not from Africa or Asia. Pagans did not believe in one God, but many. Pagans did not believe in an orderly, rational, stable universe. If paganism came, science went, he argued: ‘Let’s be very clear about that.’
Similarly, Christian belief in the dignity of each individual had led directly to the development of democracy, the rule of law, education and to social care. The Christian belief that we should love our neighbour as ourselves was the antidote to tribalism, nationalism and racism.
Cement
Only if we recovered our common Christian faith would we have the cement of a common belief needed to hold our European Union together. Common cement among people came not by treaties signed by governments, however good they were. Neither from a common currency, a common social policy, nor a society empty of belief. A common belief was what held us together. We did not have a common belief anymore. Secular up to a point, the state could really only work if society itself had a well-rooted belief system. Without that the entire whole would fall apart. But today’s intellectual leaders lacked that common faith.
Yet the power of the Gospel was God’s Holy Spirit. We didn’t need the monopoly of Christendom. The message had a power of its own. Pagan Rome was not overcome by giving Christians a monopoly. Pagan Rome was overcome by the Christians’ lives, the consciences they pricked and the Spirit revealing truth.
The power was just the same as it had been in the early Church, he declared, and in all the great works of conversion which had swept Europe. Then he added confidently, ‘and will certainly sweep it again!’
Thank you, Sir Fred! You helped me, and no doubt many others, to see the big picture.
Till next week,
Jeff Fountain

The creed that unites and divides

The opening speech of the director of the Schuman Centre for European Studies, Jeff Fountain,…