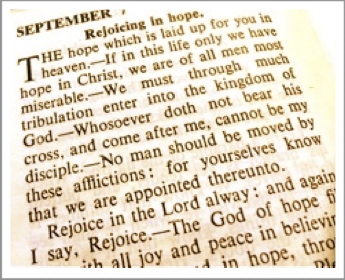 There’s little in the news these days to give us much hope. Who looks forward to hearing more news about The Ukraine, Ebola in Africa, ISIS in Iraq and bombardments in the Gaza strip?
Twenty-five years ago, there was much rejoicing as we followed the news–from Poland, Hungary, East Germany, Czechoslovakia and Romania, and later from Lithuania, Latvia, Estonia, Russia and eventually Albania. Communism was collapsing. The barbed wire was being rolled up. Crowds with sledge hammers attacked the hated wall. Those were heady, exciting and hope-filled days. There was much to rejoice about.
Against the background of all this current news, I celebrated becoming a senior citizen this weekend. When you’ve spent most of your life in something called ‘Youth With A Mission’, you live with a a certain self-denial about age creeping up on you. But now, undeniably, the ripe old age of sixty-five has overtaken me.
The Daily Light reading for my birthday, September 7, is headed ‘Rejoicing in hope’. I read this together with the wonderful people who are part of the rich inheritance God has given me in my adopted homeland: my wife, three sons, three daughters-in-law and three grandchildren. The reading was all about hope, a major theme for me over the past twenty-five years.
Paul, who suffered imprisonment, beatings, riots, suffering, injustices and shipwrecks, urged his Roman readers–and us today–to ‘rejoice in hope’ of the glory of God (Ro 5:2).
Inheritance
Personally, I have much to rejoice about. I first arrived in Europe forty years ago, managing a company of singers, dancers and musicians on a concert tour through cathedrals and beautiful churches in England and Holland. I had no thought of remaining in Europe but found myself returning here a year later to work for a ministry called Dilaram, maybe for a year or two.
Another year later, I found myself being married to a Dutch girl, Ronnie de Graaf, alias Romkje Fountain-de Graaf. Dilaram had by then become part of YWAM. I was now getting an inkling that Holland could become my long-term home. One of the verses through which God had spoken to me about leaving New Zealand in the first place was from the July 26 reading that same Daily Light:
By faith Abraham,…called to go out into a place which he should after receive for an inheritance, obeyed (Heb 11:8)
This verse had returned to me repeatedly at key moments of my journey, including the weekend that I  flew back to Europe to work with Dilaram. Would this be the place where I would receive my inheritance? I was prepared to leave the choice with God, in response to the second verse of that Daily Light reading: He shall choose our inheritance for us (Ps 47:4).
To be honest, a few months after arriving at Heidebeek I was having doubts about whether or not I had made the right move. What was I doing stuck out here among cows in the Dutch countryside? As I stared out the window of my office, someone knocked at my door, handed me a sheet of paper with some verses written on it, and said they had felt impressed to give me these verses. In one glance, I realised where these verses came from: the Daily Light reading of July 26! By faith Abraham,…. He shall choose… He led him about… I am the Lord thy God which leadeth thee… We walk by faith… etc. But here it was sometime in November! And this person had no idea how meaningful that particular selection of verses was for me.
This weekend therefore was an occasion to reflect on that promised inheritance: almost four decades of ministry in Holland and Europe, and now this growing extended family. Ample reason to rejoice!
Shock
Yet, as already stated, there seems little to rejoice about the storm clouds on the global horizon these days. Does Paul really expect us to rejoice in the face of such threats to global peace?
Many were rejoicing in the progress made towards global inter-connectedness through world trade and financing. They believed secular liberalism to have been the end station, the ‘end of history’. Recent events have been a rude shock to this perspective.
The same thinking was prevalent prior to World War One, seen as an aberration to be gotten over as quickly as possible to get back to progress as normal. We all know what followed: a depression, another world war, and a cold war. And now the hope of 1989 is evaporating.
So how then can we rejoice? Paul does not tell us to rejoice in hope of a better world through human effort, but in hope of the glory of God. So long as here in Europe we continue to suppress the knowledge of God we once had and fail to give thanks to him, things will fall apart, the centre will not hold.
Rejoicing in the hope of the glory of God means we continue to pray for God’s kingdom to come on this planet, for his will to be done on earth and his glory to be seen–even here in Europe.
Till next week,
Jeff Fountain

Living together in peace

The week before the 9/11 tragedy over two years ago, the Global Leadership Team of…

It happened again last week in Berlin. When I asked a German congregation to think…